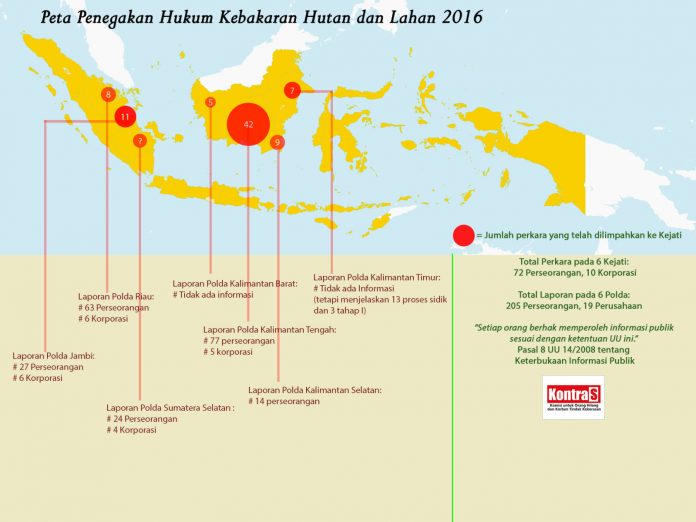 KontraS consistently highlight the law enforcement on forest and land conflagration events that caused massive damage to the environment, including public air quality, until it gets a strong spotlight both from within and outside the country.

The Commission for the Disappeared and Victims of Violence (KontraS) consistently highlight the law enforcement on forest and land conflagration events that caused massive damage to the environment, including public air quality, until it gets a strong spotlight both from within and outside the country. This time in monitoring law enforcement, KontraS conducts active correspondence with the 7 High Courts with 6 of them provides answers through a mechanism of public information transparency (KIP) regulated in Law No. 14/2008. There are several High Courts located in the province of Riau, Jambi, West Kalimantan, Central Kalimantan, South Kalimantan and East Kalimantan. KontraS appreciates the legal steps taken by the National Police of Republic Indonesia (Polri) and the High Court in working together, encouraging and ensuring that the law enforcement function does not work discriminating primarily on corporate crime.

However, the High Court in South Sumatera province is quite disappointing because they did not give any answers at the request of KIP that KontraS expected. Whereas, South Sumatera Province has serious enough forest conflagration cases based on information from South Sumatera Police, hectarage coming into the scope of environmental crime area of 3864.2 hectares with 4 ensnare corporations and 24 individuals.

In the information provided by the high court, KontraS finds several important details:

Interesting information that needs attention is the involvement of a large corporation in the event of forest conflagrations and land:

One of the corporation in Central Kalimantan named PT Globalindo Alam Perkasa is an organizer group of the largest palm oil in Indonesia that Musim Mas Group, owned by conglomerate named Bachtiar Karim – the rank 7th richest person in the Republic Indonesia, where one of the cooking oil products which is branded Sunco. This can be categorized multinational companies because it operates not only in Indonesia.

KontraS also find the name of a local company named PT Hasnur Citra as a subsidiary of Hasnur Group owned by local conglomerate named Haji Leman. Haji Leman known as the part of the Golkar Politcal Party, had served as chairman of the DPD I Golkar three times in a row. Hasnur Group has business focus on the coal industry, and palm oil.

PT.  Langgam Inti Hibrido which is a subsidiary of Saratoga Sentra Business groups belongs to Sandiaga Uno on 21 September 2015 by Minister of Environment and Forestry Decree dated 21 September 2015 suspended license. However, on January 25, 2016, after four months suspended, permits the company reintroduced through SK.390/Menlhk/Setjen/Kum.4/I/2016 though the criminal proceedings are still ongoing in the High Court of the Riau Province.

KontraS still see the lack of coordination that are not managed properly by the police in urgent crimes. In addition, there are evidences that must be guarded space that smokes and fire is not a natural phenomenon. KIP’s report has not dismantle yet the network of responsibility on large-scale corporate and multinational which have even mention some names of companies that oftenly have a crime of economic development scandals in Indonesia. However, KontraS still encourages the use of judicial mechanisms as the main mechanism. This mechanism is important because there is space taken by restoration of the rights of crime victims of forest conflagration that up to now it is unclear the fate of the recovery. In this report KontraS have found some typologies of law enforcement that could be criticized:

Representing legal subjects who have died as many as four people. With the death of the defendant in accordance with Article 77 of the Criminal Code states that the authority to prosecute criminal is removed, if the defendant died. KontraS judging by presenting legal subjects who have died is very not strategic, because the focus of the investigation is not directed at the ability of authorities to reveal the modus, networking engagement between the individual perpetrators and corporate actors.

KontraS also found there were 12 large-scale companies both multinational and national corporations included in a list of demands from diverse prosecutor in Sumatera and Kalimantan. From the analysis by the involvement of individual perpetrators of international law inherent in a corporate entity has the individual responsibility inherent space with corporate activities. In recent decades the democratic countries have adopted many international instruments that ultimately seeks to put the evil multinational corporations as the so-called “internationalization crime”. The pattern of these crimes normally captured on corrupt practices through instruments of the United Nations Convention Against Corruption. In the context of Indonesia, the findings of fact of the corporation for the Group Musim Mas and Group Hasnur (local tycoon) shows that the strong suspected the company will use the concept of individual responsibility as a ‘black sheep’ model, also in the reverse situation management companies will hide behind the big name corporations to divert responsibility.

The issuance of Notice of Commencement of Investigation (SPDP), which means the coordination has started between the investigator and the prosecutor. In the criminal justice system integrated as SPDP is removed then the prosecution has begun square off to coordinate the progress of the case, including providing inputs to the investigating team. Although in practice it is often not smooth coordination.

The legal process being conducted by a team of investigators and the prosecutor in Sumatera and Kalimantan are not widely known by the central government and the local governments. This could be seen from the lack of news that appeared in the daily national media, even though the information developed in the local media as well as the differences in the use of articles and laws in different regions showed no synergy between central and local governments in enforcing the law on forest and land conflagration that in this case there are also areas that use regulation to catch the perpetrator.

However, KontraS appreciate the use of size-based law enforcement regional regulations as has been used in Central Kalimantan. They are widely used sources of progressive local regulations that can be used as an argument to any legal violations.

The concept of corporate criminal responsibility is still driven to find a format that is universal and could be applied in criminal standard at the national level. Nevertheless, there are many initiatives starting to be encouraged to reinforce the presence of the corporate responsibility function. The presence of the Guiding Principles on Business and Human Rights: Implementing the United Nations “Protect, Respect, and Remedy” Framework is a progressive step that must be presented by the state in ensuring the availability of collateral protection, respect and involvement of corporations in the restoration of rights of the victims who become part of their responsibilities should be presented with a strategy and an effective mechanism.

Responding to the situation well and promoting the constitutional rights of citizens is the goal of this report. KontraS as part of Indonesian society would like to explain that there are remain of state responsibility spaces to prosecute perpetrators of forest and land conflagration to be a deterrent to their actions, while ensuring that similar acts will not occur in the future. Not to be forgotten, the rights of victims should also get attention from the government, because this kind of action is risky to be repeated and could cause massive casualties on a large scale.