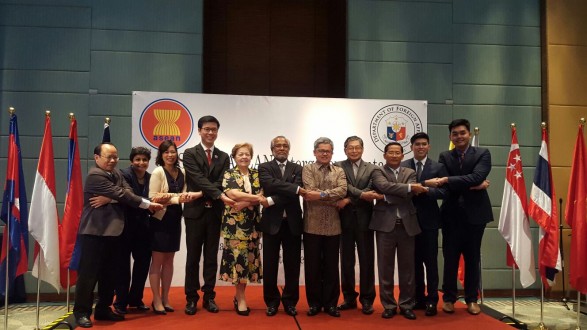 The ASEAN Intergovernmental Commission on Human Rights (AICHR) convened its Special Meeting in Manila, Philippines on 16 and 17 September 2015. The Meeting was chaired by H.E. Tan Sri Dr. Muhammad Shafee Abdullah, the Chair of the AICHR and the Representative of Malaysia to the AICHR.

The ASEAN Intergovernmental Commission on Human Rights (AICHR) convened its Special Meeting in Manila, Philippines on 16 and 17 September 2015. The Meeting was chaired by H.E. Tan Sri Dr. Muhammad Shafee Abdullah, the Chair of the AICHR and the Representative of Malaysia to the AICHR.

The Meeting held extensive discussions on the preparation for ASEAN – EU Policy Exchange and Study Visit on Human Rights, including coordination meeting with a representative from ASEAN Committee on Women (ACW). The ASEAN – EU Policy Exchange on Human Rights will take place in Brussels, Belgium from 19 to 23 October 2015. Representatives from four human rights bodies in ASEAN will participate in the event, namely the AICHR, ASEAN Commission on the Promotion and Protection of the Rights of Women and Children (ACWC), ACW and ASEAN Committee on the Implementation of the ASEAN Declaration on the Protection and Promotion of the Rights of Migrant Workers (ACMW).

The AICHR also met with the representatives of Asian Institute of Management to discuss the Regional Study on Economic Participation of Women in the ASEAN Community which the AICHR is undertaking.

To further establish an enabling environment for meaningful and constructive engagement with civil society, the AICHR has expeditiously agreed on the modality to operationalize the Guidelines on the AICHR’s Relations with Civil Society Organisations. The AICHR expects to launch the procedure by posting the application form on its website as soon as possible.

The Meeting further exchanged views on ways to move forward the two ongoing AICHR Thematic Studies, namely, the Right to Peace, and Migration and Human Rights.

The Meeting thanked the Representative of the Philippines to the AICHR and the government of the Philippines for the hospitality and excellent arrangements of the Meeting. The AICHR will hold their last meeting for this year, which also will be the handing over of the AICHR Chairmanship from Malaysia to Lao PDR in Kuala Lumpur from 27 to 29 November 2015.