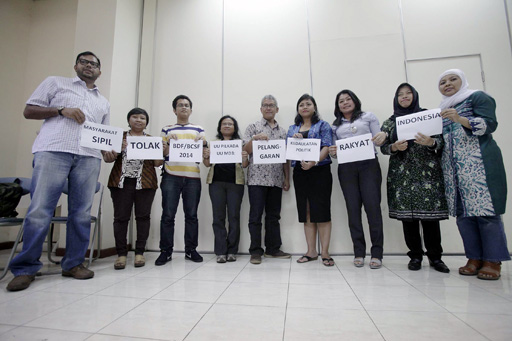 Eleven civil society organizations; LBH Jakarta, YAPPIKA, PSHK, KontraS, Migrant Care, ICW, PERLUDEM, Transparency International Indonesia, JPPR, ELSAM and FITRA have refuse to attend and deliver speech in the international forum on democracy; Bali Civil Society Forum (BCSF) 2014. Carrying theme ‘Democratic Governance in the Twenty-First Century: the Roles of Civil Society,’ this forum has inviting 14 civil society organizations to be a speakers on the civil society role in democracy. This withdrawal is a respond of the democracy setback happen in Indonesia.

After the presidential election on the last 9 July 2014, various political maneuvers have been done in the parliament level. As the result, two legislations which determined democracy in the country has adopted by the parliament; the Law on MD3 and the Law on Local Election. “These laws are where the democratization setback are started and it’s only reflect the ambition of coalition in the parliament,” said Febionesta, LBH Jakarta Director. “Tension in the Indonesian parliament is increasing then we just don’t know whether their decision enacted is the voice of the people or the voice of the party,” he continue.

In the Law on Local Election there are provisions that the local head has to be chosen by the Local Parliament (DPRD), not to be directly elected by the people. “Deprivation of peoples’ political rights is violating the peoples’ sovereignty,” said PERLUDEM Director Titi Anggraini. Emphasizing Titi, Director of KontraS Haris Azhar also expresses himself that democracy is the art of listening to the peoples’ voice and choice. “Direct election is the essence of democracy, which the result is the manifestation of the peoples’ choice,” he adding. “Impairment of society sector is actually started with the developing of Law on Mass Organization by the government and the parliament, currently the Law has a real impact to the civil society organization,” according to Director of YAPPIKA Fransisca Fitri.

According to these eleven civil society organizations, Bali Democracy Forum (BDF) and Bali Civil Society Forum 2014 –this carries the theme of civil society role, is the forum which not relevant to be conducted as now there is the indecision of the president toward the guarantee of democracy continuity in Indonesia. The president should be able to revoke the Laws to uphold the democracy in the country, before the bill has adopted in the Plenary Session of the Parliament. “With the existing of this Law, shows that the SBY President is not serious and tend to playing around with the protection and respect of peoples’ political rights, where the substance is actually reversed to the Parliament,” said the Transparency International Indonesia Secretary General Dadang Trisasongko. It should be known that one of the characteristic of the democratic country is to give a space for the people to express their opinion and aspiration and accepted by the government.

“BDF and Bali Civil Society Forum is only a discourse. The enactment of Perppu Nr. 1/2014 to revoke the Law Nr. 22/2014 on Local Election is only to save the image of SBY’s reign, but not to uphold the democracy,” closed Selly Martini, the Deputy Director of Indonesia Corruption Watch (ICW).

Bali Civil Society Forum is the separate forum which conducted back-to-back with the Bali Democracy Forum. Those forums are organized by Institute for Peace and Democracy (IPD), an institute initiate by President SBY since 2008.