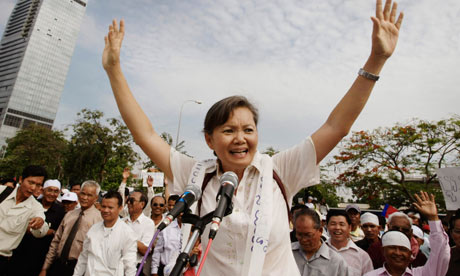 The clash left 31 people injured, including at least 17 Daun Penh District’s security guards. At least seven CNRP MPs-elect and a CNRP’s officer have been unfairly charged in connection to the violence, including CNRP Head of Public Affairs Mu Sochua. The closure of Freedom Park and the subsequent arrest of those demanding it reopen have no legal basis: the King and the government of Cambodia have not declared a State of Emergency and the Prime Minister has addressed the public that Cambodia’s administration is functioning normally.

The clampdown on the opposition is unjust. It is the government who is obliged to protect and promote the right of all citizens, including the opposition, to freedom of expression and ensure that demonstrations pass off peaceably. Cambodia civil society notes that Mu Sochua is a strong advocate for non-violence and previous demonstrations have adhered to non-violent principles.

Cambodian civil society organizations insist that the courts release Mu Sochua and others immediately and unconditionally. The government has argued that the fifth  National Assembly was established with 123 parliamentarians. Following their  argument,  the government is reminded of article 80 of Cambodian Constitution which holds that members of the National Assembly shall enjoy parliamentary immunity and none of them shall be prosecuted, detained or arrested because of opinion expressed in the exercise of their duties, and Provision 04 news of amendment law on internal rule of the National Assembly of Cambodia, stating that members of parliament have status and privileges as a top supreme official of Cambodia ……». Article 37 of the Constitution protecting the right to holding demonstrations states the right to strike and to organize peaceful demonstration shall be implemented and exercised within the framework of law. Right to expression in 51 article of constitution stating that Khmer citizen shall have freedom of expression of their idea, freedom of information, freedom of publication and freedom of assembly. Furthermore, International Covenant on Civil and political Right on second paragraph of article 19 saying that everyone shall have a right to freedom of expression; this right shall include freedom to seek, receive and impart information and ideas of all kinds, regardless of frontiers, either orally, in writing or in print, in form of art, or through other media of his choice.

The Government of Cambodia