Home Statements State leash on media freedoms at its end 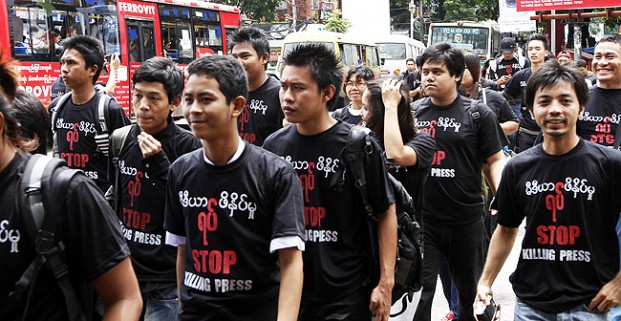 With the passage of Burma’s Press Law in April this year, there had been a glimmer of hope that the case of the journalists from Unity Journal​ would be given a bit of protection for their daring expose of an alleged chemical weapons plant in the Magwe division last January.

With the passage of Burma’s Press Law in April this year, there had been a glimmer of hope that the case of the journalists from Unity Journal​ would be given a bit of protection for their daring expose of an alleged chemical weapons plant in the Magwe division last January.

After all, the new law guaranteed that no journalist may be jailed for doing her or his work.

These journalists were hauled off to jail on 31 January for the report, and have not been granted temporary release or bail while the case progressed.

SEAPA is extremely disturbed by the verdict and the heavy sentencing of the journalists. The charges and the outcome are disproportionate to the problem at hand. We condemn the criminalization of media work, and in this case, the cruel punishment of hard labour.

No journalist should have to face this kind of action for their work, and in the case of the Unity Journal, the issue covered clearly had immense public interest.

The arbitrary detention and unjust sentencing of the Unity journalists represents the country’s most drastic reversals of media freedom.​

Until the enactment of the press law, the 1962 Printers and ​Publishers Registration Act (PPA) loomed ominously as the media community slowly expanded their reporting spaces to cover previously prohibited topics such as corruption, ethnic conflict and the opposition.

However, the simultaneous enactment of the Press Law and Printing Presses Enterprise Law (PPEL) has signaled that Burma has been at best merely reluctant in giving the media the space to truthfully report to an information-staved population. The PPEL retains​ the state prerogative to license and withdraw publishing rights if they violate age-old restrictions; and the Press Law, while granting freedoms to journalists, retained non-contradictory provisions of the 1962 PPA.

The Unity Journal sentencing demonstrates that state and military interests can sweep away the public’s right to a free press and to freedom of information when the regime’s interests are at stake.

Using the 1920 State Secrets law demonstrates that the Burmese military is not even willing to respond to, ​and come clean regarding the regime’s potential violation of the an international ban against the manufacture of chemical weapons.

The use of this law indicates that the regime may really have something to hide in relation to the serious allegations of the expose. Invoking the matter as a state secret meant that there will be no need to confirm or deny the veracity of the claims of Unity Journal.

More threateningly to the journalist community, the charges were filed by the Office of the Myanmar President Thein Sien, the poster boy of the transition. This is a signal to use laws other than those related to media as a new means to restrict journalists.

On Tuesday, Thein Sein himself warned the media of misusing media freedom to threaten stability of the state.

“Affirmative action [sic] will be taken against those who threaten state stability rather than using media freedom for good,” Thein Sein was quoted in The Irrawaddy, in his most stern warning to the media, in relation to the recent outburst of interreligious violence in Mandalay.

In the same address, Thein Sein described the Burmese media environment as “one of the freest in Southeast Asia”.

But while many may questions such claims, his statements are an ominous indication ​that the leash given by the government to media freedoms in Burma may have reached its end.