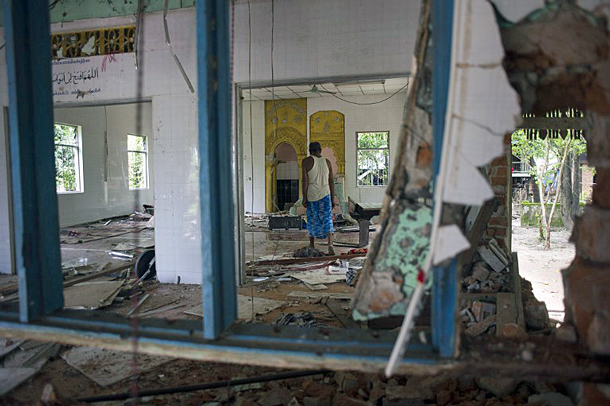 Two recent attacks on mosques in Myanmar have again raised questions about the commitment of the Myanmar government to tackle rising anti-Muslim sentiment and the hate speech that fans it, ASEAN Parliamentarians for Human Rights (APHR) said today.

JAKARTA, 4 July 2016 — Two recent attacks on mosques in Myanmar have again raised questions about the commitment of the Myanmar government to tackle rising anti-Muslim sentiment and the hate speech that fans it, ASEAN Parliamentarians for Human Rights (APHR) said today.

The collective of regional lawmakers called on authorities in Myanmar to undertake thorough investigations of both incidents and bring perpetrators to justice.

“The Myanmar government must make it clear that anti-Muslim violence and vitriol will not be tolerated. Authorities have a responsibility to fully investigate these attacks and bring to justice those involved. Anything short of that would represent a failure to protect a vulnerable minority community,” said APHR Chairperson Charles Santiago, a member of the Malaysian Parliament.

On 1 July, a mob of more than 100 individuals wielding sticks, knives, and other weapons attacked and burned a Muslim prayer hall to the ground in a village in Hpakant Township, Kachin State. Many Muslim residents fled the village following the attack, fearing for their safety. No arrests have been made in connection with the incident.

The attack followed a similar incident, which took place on 23 June in Waw Township, Bago Region. There, a mob ransacked a mosque and a Muslim cemetery, forcing local Muslims to take refuge in a nearby village. Less than a week later, Bago Chief Minister U Win Thein announced that local authorities planned to take no legal action against those responsible for the violence.

“The failure to take appropriate action against the perpetrators of violence in Bago undermines the government’s supposed commitment to the rule of law and prolongs a disturbing cycle of impunity, which threatens the success of Myanmar’s continued transition,” said Santiago.

“By not properly investigating the attack, the state is effectively supporting it, which can fuel further violence,” warned APHR Vice Chair Eva Kusuma Sundari, a member of the Indonesian House of Representatives.

Parliamentarians argued that the lackluster government response to the most recent attacks should also be a wakeup call for the international community.

“The government, led by State Counselor Aung San Suu Kyi, has been telling the international community to ‘just trust us’ to handle the situation in Rakhine State and address discrimination against Rohingya and other Muslim communities. Events like these prove that they must do much more to earn that trust,” Charles Santiago said.

Rohingya Muslims in Rakhine State face systematic persecution at the hands of government authorities and have been a main target of hateful rhetoric from Buddhist nationalist groups, as well as some government officials.

APHR urged the Myanmar government to take concrete steps to combat hate speech and incitement to violence. A disturbing rise in anti-Muslim sentiment, fed by religious nationalist discourse, has contributed to a climate in which attacks like these have become increasingly common, parliamentarians warned.

“These attacks demonstrate the need for the Myanmar government to work much harder to address anti-Muslim sentiment, which is rising rapidly throughout the country. The most recent acts of violence are not isolated incidents. They are just the latest in a series of disturbing developments fed by the hate speech of groups like Ma Ba Tha,” Eva Sundari said, referring to the Buddhist monk-led Association for the Protection of Race and Religion.

“It is the responsibility of the Myanmar government, including State Counselor Aung San Suu Kyi, to protect all citizens. That means unequivocally condemning hate speech and religiously motivated violence and emphasizing that extremism and exclusion have no place in the successful democratic society that Myanmar hopes to become.”

MPs noted that religious discrimination and violence is a problem throughout Southeast Asia, which ASEAN governments must tackle as a regional community.

“ASEAN and all its member states must take action to combat the rise of similar incidents throughout the region. Minority rights are under threat from intolerant groups encouraged by the ignorance and negligence of regional governments,” Sundari said.