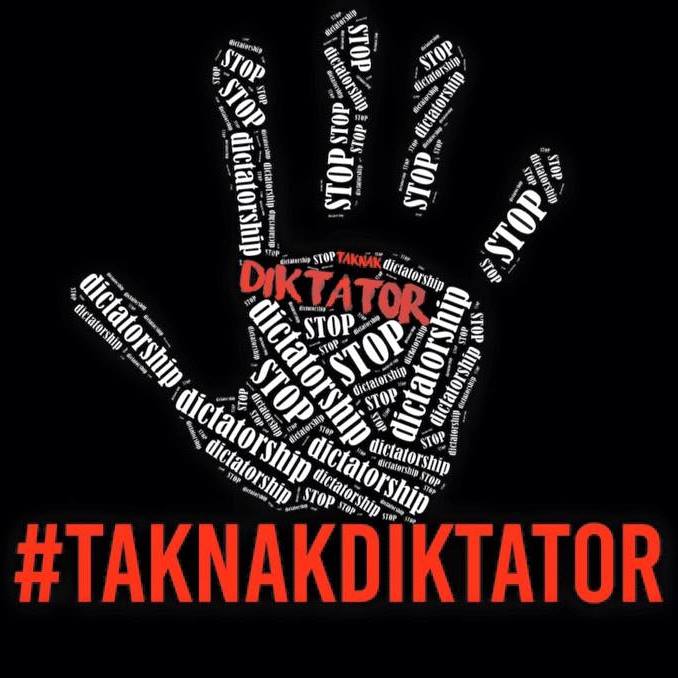 Malaysian society is fast becoming an Orwellian dystopia in which labels such as ‘moderates’, ‘extremists’, ‘national security’, ‘national harmony’, ‘sedition’, and even ‘sabotage of the economy’ and ‘parliamentary democracy’  have become relative (Doublespeak) and imprecise, depending on how they are defined by the state and the judiciary.

Malaysian society is fast becoming an Orwellian dystopia in which labels such as ‘moderates’, ‘extremists’, ‘national security’, ‘national harmony’, ‘sedition’, and even ‘sabotage of the economy’ and ‘parliamentary democracy’  have become relative (Doublespeak) and imprecise, depending on how they are defined by the state and the judiciary.

The Malaysian Government has added to this dystopia by introducing yet another unjustified draconian law, ‘The National Security Council Bill’ with measures equivalent to those following the declaration of a state of Emergency, all in the name of protecting ‘national security’. The Malaysian Government’s human rights record for 2015 is already appalling, even prior to the tabling of this Emergency-like law, given the range of detention-without-trial laws including SOSMA, POCA, POTA and DDA, other “catch-all” laws such as the Sedition Act and the arbitrary actions of enforcement personnel.

And if the promise made by then Home Minister Tun Razak in 1960 that the ISA would never be abused could not be kept, what value is the word of the former anti-corruption activist (FACA) Minister in the PM’s Department that the new NSCB will not be abused!

Detention without trial laws invariably abused by the State

Just as the ISA was abused manifold, the relatively new SOSMA has been blatantly abused in the case of Khairuddin and Mathias Chang when they were held for “attempted sabotage of the Malaysian economy” for having made reports about the mismanagement of 1MDB and the depositing of RM2.6 billion into the Prime Minister’s personal account. They were initially even denied bail but subsequently this was allowed by the High Court because it was judged that theirs was “not a security offence”.

Just as it was argued by the Alliance /BN government for decades that the ISA was essential to neutralize the threat posed by the Opposition, the government now justifies detention without trial as an essential means to counter the threat of international terrorism by groups such as IS.

While SUARAM vehemently condemns the terrorism and barbarism of groups such as IS we are equally as concerned about upholding human rights and the rule of law in our country. In principle, we condemn the use of detention without trial and recent cases have shown that it is possible to bring alleged terrorists to justice by trying them in open court. We would remind Malaysians that even in the countries of the West that are under terrorist attacks, they do not have detention without trial laws directed at their own citizens.

We would also like to urge politicians on both sides of the political divide not to rely on McCarthyist methods to demonise their political opponents by imputing that the latter have been “infiltrated by IS” and calling for the police to investigate as was done by a Parti Amanah leader recently. This is reminiscent of the sixties when opponents of the Socialist Front would allege that the SF had been infiltrated by the CPM. Any allegations of terrorist connections must be backed up by solid evidence and proof. Failure to do so is grossly irresponsible and brings us closer to being a police state.

The plight of Rohingya ‘boat people’ a humanitarian disaster

The tragedy of Rohingya refugees being stranded in the Andaman Sea in 2015 was bad enough but the refusal of Malaysia and other regional authorities to take them in was a human rights abomination of major proportions. The numbers stranded aboard rickety ships was estimated to be in the thousands. Despite a plea from U.N. Secretary General Ban Ki-moon, urging Southeast Asian leaders to uphold “international law” and “the obligation of rescue at sea,” Malaysia refused to accept these “boat people” who were suffering from rapidly dwindling provisions.

The Malaysian government did not engage in any search and rescue efforts to provide desperately needed aid at sea nor did they allow migrants to land on offshore islands for such aid. The Malaysian Deputy Home Minister Wan Junaidi Jaafar said the surge of refugees from Myanmar and Bangladesh seeking asylum in Malaysia was unwelcome and his government would turn back any illegal arrivals.

The attitude of Penang Deputy Chief Minister to the plight of the Rohingya boatpeople was just as disappointing. He had criticised the Federal Government’s move to house the Rohingya boatpeople in Penang as another politically motivated ‘Project IC’. As a former radical upwardly mobile person (FRUMP) the Pakatan Rakyat leader should have shown more humanitarian concern for the welfare of the boatpeople and could have used Penang state government resources to provide food and drink to these desperate people.

Malaysia’s response was in sharp contrast to the attitude of the European countries such as Germany and the Italians in the island of Lampedusa who have shown a commendable humanitarian effort to accept the thousands of refugees fleeing the war in Syria.

How does discovery of mass graves square with Tier 2 status?

The discovery of multiple mass graves (139) by the Malaysian police and the uncovering of 28 suspected human trafficking camps located about 500 metres from the country’s northern border makes us skeptical of the decision by the US to upgrade Malaysia to Tier 2 status in the US Human Trafficking Report for 2015. The dense jungles of southern Thailand and northern Malaysia have been a major route for human traffickers bringing Rohingyas from Burma.

From press reports, local people have been aware of atrocities in the border area for years and it is incumbent on the Government to explain why the police and security forces have been unable to apprehend these human traffickers all these years when they could deal with the greater challenge of the insurgency during the Emergency.

Human rights compromised by the TPPA?

Until very recently Malaysia was ranked as one of the countries with the worst human trafficking ranking in the eyes of the U.S. State Department, a ranking which bars such countries from entering into the TPPA deal. Is it coincidental that the 2015 upgrade to Tier 2 status should happen just as the US government is trying very hard to accommodate Malaysia in the TPPA? If not, how is this upgrade justified in the light of the grisly mass graves discovered in 2015? There had been speculation that Malaysia would remain at Tier 3 because, despite a rise in investigations Malaysia’s conviction rate had apparently fallen even lower than before.

“If true, this manipulation of Malaysia’s ranking in the State Department’s 2015 TIP report would be a perversion of the trafficking list and undermine both the integrity of this important report as well as the very difficult task of confronting states about human trafficking,” said Democratic Senator Robert Menendez, who had pushed to bar Tier 3 countries from inclusion in the trade pact.” (Reuters, 9 July 2015)

Another apparent compromise by the US Government in getting Malaysia to sign the TPPA is the surprising decision by the US that Putrajaya’s pro-Bumiputera policies will not be affected in the Trans-Pacific Partnership Agreement (TPPA). United States Trade Representative Michael Froman said at a forum in 2015 that this is a “sovereign decision”. Froman said the US recognises that each country in the agreement has its own way of dealing poverty and growth, amid fears by pro-Malay groups that the TPPA will erode Bumiputera privileges. If this is allowed to pass, the Malaysian government can also justify denying better labour standards to workers on the basis of its “sovereign decision”.

It is clear that the US government is eluding the question of whether some of these so-called “Bumiputera privileges” amount to racial discrimination and whether in fact they violate international human rights principles. I would refer the US Government to the article by former Ambassador to Malaysia, John Malott, ‘The Price of Malaysia’s Racism’ in The Wall Street Journal on 8 February 2011.

Is it also Malaysia’s “sovereign decision” to continue to incarcerate the former Deputy Prime Minister Anwar Ibrahim even when the United Nations Working Group on Arbitrary Detention has condemned his arbitrary detention and called for his immediate release?

Proposals to integrate human rights standards into trade agreements are nothing new. United Nations institutions would be the appropriate international adjudication to establish, definitively, which countries should and which should not be considered human rights violators. In fact, the US has always behaved with considerable ambivalence toward international norms and for decades the Senate simply refused to ratify any of these conventions.

Thus, it is actually the United States that has been unwilling to submit to constraints on its sovereignty. We certainly do not have any illusions about US intervention especially since the US used the pretext of bringing democracy to the Iraqi people as a reason to invade Iraq. This has made the rest of the world associate the idea of a “good intentioned intervention” with western abuses of power. For a better world order, the United States must change its policies to keep in step with world opinion and so must the Malaysian Government which to this day has failed to ratify many vital international treaties.

Human rights are guaranteed in our Federal Constitution

Far from being in conflict with our national sovereignty, human rights are actually the cornerstone of the rule of law and state sovereignty of Malaysia. Part II on ‘Fundamental Liberties’ in our Federal Constitution spells out unequivocally the human rights of Malaysians. They are an essential tool enabling states to ensure that every person can live with dignity, regardless of gender, ethnicity, religion or other status. Most important of all, these international and inviolable principles empower citizens and human rights advocates such as SUARAM, to participate actively in shaping domestic development for the good of all.

Unfortunately, many of our human rights have been unceremoniously overridden through decades of constitutional amendments by the ruling BN coalition. This is how crypto-Emergency rule, detention without trial and other violations of our fundamental freedoms have defiled Malaysian democracy, rapidly transforming Malaysian society into a police state.