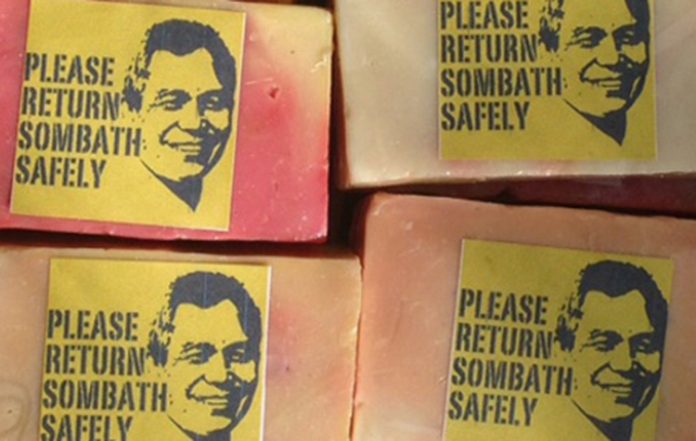 Bangkok, 15 December 2016: On the fourth anniversary of the enforced disappearance of prominent Lao civil society leader Sombath Somphone, we, the undersigned organizations, condemn the Lao PDR government’s ongoing failure to adequately investigate Sombath’s disappearance. We urge the authorities to act to conduct an effective investigation with a view to determining his fate or whereabouts. In particular, we condemn the Lao PDR government’s inaction after the discovery of new video evidence made public 12 months ago.

Sombath was last seen at a police checkpoint on a busy street of the Lao capital, Vientiane, on the evening of 15 December 2012. Sombath’s abduction was captured on a CCTV camera placed near the police checkpoint. CCTV footage showed that police stopped Sombath’s car and, within minutes, unknown individuals forced him into another vehicle and drove away. The CCTV footage clearly shows that Sombath was taken away in the presence of police officers. The footage also showed an unknown individual driving away from the city in Sombath’s car.

In December 2015, Sombath’s family obtained new CCTV footage from the same area and made it public. The video shows Sombath’s car being driven back towards the city by an unknown individual. At a minimum, this should have prompted a review of other CCTV cameras along the main route the car was taking back into the city.

Since this new evidence was made public by Sombath’s family, the Lao authorities have failed to take any initiative with regard to the investigation, or present any new findings. Police issued their last report on the case on 8 June 2013. After four years, it is apparent that the government has not undertaken a serious and competent investigation into Sombath’s enforced disappearance.

We also call on the Lao authorities to provide information on the fate or whereabouts of 10 other activists who are victims of enforced disappearance. Authorities detained two women, Kingkeo and Somchit, and seven men, Soubinh, Souane, Sinpasong, Khamsone, Nou, Somkhit, and Sourigna, in November 2009 for planning to participate in pro-democracy demonstrations. Uniformed men abducted and caused the enforced disappearance of Somphone Khantisouk, an outspoken critic of Chinese-sponsored agricultural projects in Luang Namtha Province, in January 2007 and there has been no trace of him since.

The arrest and abduction of Sombath Somphone and the 10 other activists, followed by the Lao PDR government’s refusal to acknowledge their deprivation of liberty, or provide information on their fate or whereabouts amounts to enforced disappearances under Article 2 of the International Convention for the Protection of All Persons from Enforced Disappearance (ICPPED). Despite signing the ICPPED on 29 September 2008, Laos is yet to ratify the convention. The government should immediately ratify the ICPPED and adopt national legislation to effectively implement its provisions and ensure that no one else faces enforced disappearances in the future.

The Lao PDR government’s ongoing failure to undertake adequate investigations into all cases of enforced disappearances violates its obligations under Article 2(3) of the International Covenant on Civil and Political Rights (ICCPR), to which Laos is a state party. The ICCPR states that governments must provide an “effective remedy” for violations of rights guaranteed by the Covenant, including the right to liberty and security of person.

We urge individuals, institutions, and governments around the world to join our call and demand the Lao PDR government answer the question: “Where is Sombath Somphone?”