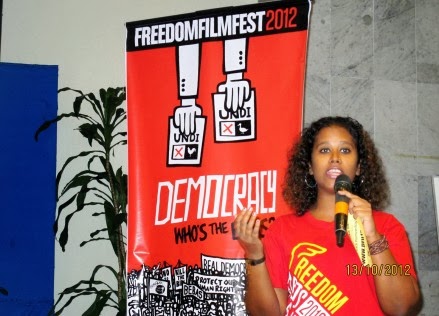 It is ridiculous that in the age of the free flow of information enabled by the Internet that this law is still prevalent.  In fact this law allows the authorities a free hand to arbitrarily suppress human rights educators and activists.

KOMAS is pleased with the decision of the magistrate court today to bring to close the 2 and half years persecution of Lena Hendry, a member of our organisation, for screening “No Fire Zone: The Killing Fields of Sri Lanka” a documentary on war crimes in Sri Lanka.

Magistrate Mohd. Rehan Mohd. Aris said that the Public Prosecutor had failed to prove a prima facie for the case and therefore the defense does not need to be called.

In 2013, Lena Hendry was tasked to support Callum Macrae, an award winning journalist and filmmaker from the United Kingdom, to approach lawmakers in Malaysia to share the case of civil war atrocities in Sri Lanka.

Although the screening at the parliament went on without any problems, enforcement officers from the film censorship board, immigration officers and the police raided the subsequent screening on the same night for invited guests. This resulted in the arrest of 3 staff members of KOMAS.

Since then, we have challenged the Film Censorship Act 2002 which was used to charge Lena Hendry and infringing on our right to freedom of expression guaranteed in article 10 of the Malaysian Constitution.  The High Court and Federal Court rejected this challenge and subsequently the case was heard in the Magistrate court.

Although we are relieved that today’s judgment was in favor of Lena, it does not guarantee that our work to promote human rights awareness through film will not be stopped in the future.  What is urgently needed is a total review of the Film Censorship Act 2002, which has a blanket restriction on the screenings of ALL films without first going through the censorship board.

It is ridiculous that in the age of the free flow of information enabled by the Internet that this law is still prevalent.  In fact this law allows the authorities a free hand to arbitrarily suppress human rights educators and activists.

We also strongly urge the authorities to immediately adhere to the internationally accepted practice of rating films rather than censoring films.

Recently, many laws in Malaysia are being revised, tightened and used to enforce on people exercising their rights as citizens to protest, express criticisms towards leaders and the government of the day.  These include the Sedition Act, the Communications and Multimedia Act and the Official Secrets Act, that penalizes activists, bloggers, media companies and opposition politicians and ordinary citizens and refrain them from exercising their right to free expression and speech.

Lena’s case is an extension of this unhealthy and undemocratic practice to curb citizens’ democratic rights to seek information, have open discussions and make sound decisions on every day issues and especially at the ballot box.

We hope that the time spent on this case have not been in vain and have at least brought attention to the need to reform and align the law with international standards of human rights.