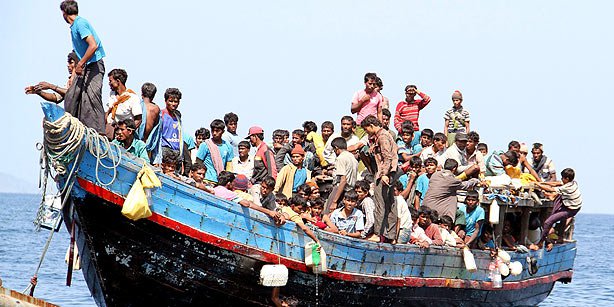 The Ministers of Foreign Affairs of Malaysia, Indonesia and Thailand met in Putrajaya, Malaysia on Wednesday, 20 May 2015 to discuss the issue of irregular movement of people into Indonesia, Malaysia and Thailand.  This is with a view to finding a solution to the crisis of influx of irregular migrants and its serious impact on the national security of the affected countries.

The Ministers of Foreign Affairs of Malaysia, Indonesia and Thailand met in Putrajaya, Malaysia on Wednesday, 20 May 2015 to discuss the issue of irregular movement of people into Indonesia, Malaysia and Thailand.  This is with a view to finding a solution to the crisis of influx of irregular migrants and its serious impact on the national security of the affected countries.

They agreed to resolve this issue in keeping with the spirit of unity and solidarity of ASEAN as well as the aspiration to have a people-oriented and people-centered ASEAN.

Acknowledging the dire humanitarian circumstances of the crisis, the Ministers expressed their deep concern on the plight of the irregular migrants, including those currently on the high seas, and in particular women and children.

The Ministers strongly condemn people smuggling and human trafficking and expressed their governments’ determination to continue to take the necessary action, individually and collectively, to bring the perpetrators of such heinous crimes to justice.

The Ministers acknowledged that a comprehensive and durable solution to the crisis requires, inter alia, the involvement of relevant stakeholders and through the various existing international mechanisms.  This notwithstanding, they agreed to implement the following interim measures:

The root causes and other contributory factors to the recent influx of irregular migrants should be immediaely identified and addressed by the parties concerned. To this end, Malaysia, Indonesia and Thailand remain prepared to continue to assist and work, in a constructive manner with the parties concerned.

Malaysia, Indonesia and Thailand will continue to uphold their responsibilities and obligations under international law and in accordance with their respective domestic laws, including the provision of humanitarian assistance to the irregular migrants.

Indonesia and Malaysia agreed to continue to provide humanitarian assistance to those 7,000 irregular migrants still at sea.  We also agreed to offer them temporary shelter provided that the resettlement and repatriation process will be done in one year by the international community.  In the meantime, Malaysia and Indonesia invite other countries in the region to join in this endeavour.

The enforcement agencies of the countries concerned will continue to share intelligence information in their efforts to combat people smuggling and human trafficking.

3.    Role of the International Community

Malaysia, Indonesia and Thailand call upon the international community to uphold their responsibility and urgently share the burden of providing the necessary support to Malaysia, Indonesia and Thailand in addressing the problem.  Subject to assurances by the international community to provide the necessary support, the Ministers propose the following:

The Ministers called on ASEAN to play an active role in addressing the issue in an effective and timely manner, in the spirit of ASEAN solidarity.  The Ministers further recommended the convening of an emergency meeting by the ASEAN Ministerial Meeting on Transnational Crime to address the crisis at hand.  They welcomed ASEAN’s initiative to establish a regional framework to address trafficking in persons as well as provide assistance to victims through the ASEAN Convention on Trafficking in Persons.