Home Statements 56 Solidarity Groups Worldwide Call for an Immediate End to Offensives in Northern Burma/Myanmar and for the Provision of Unhindered Humanitarian Assistance to the... 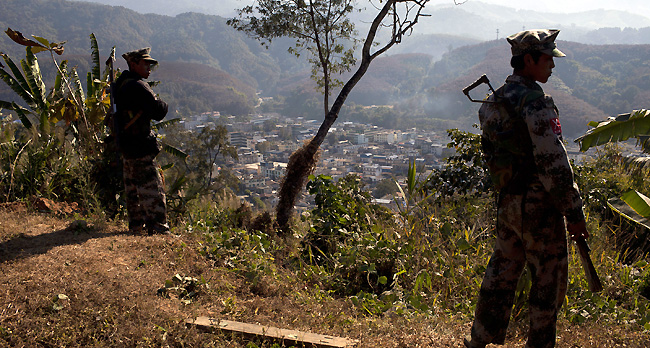 While the Government continues to use its rhetoric of peace and reform to invite donors and investors to continue to fund the peace talks and development projects, some of the heaviest fighting in ethnic areas took place this year as the Burma Army attacked the KIA and civilian population in Laiza with airstrikes for the first time in March 2015.

Four years ago on 9 June 2011, the Burma Army attacked the Kachin Independence Army (KIA) outpost, breaking a 17-year-old ceasefire agreement. Since then the Burma/Myanmar Government has launched an aggressive military offensive against the KIA and clashes have escalated into an outright recurrent war in Kachin and northern Shan State. As we mark the fourth anniversary of the renewed war in Kachin State, the Burma Army continues to increase its militarization by manipulating its forces into ethnic administrated territories, while the Government has restricted local and international humanitarian access to Internally Displaced Persons (IDPs), obstructing the delivery of adequate aid and assistance.

Since the Burma Army began its attacks in 2011, over 120,000 people in Kachin State have been displaced and more than 100,000 people have settled into IDPs camps along the China-Burma/Myanmar border. These IDPs, including women, malnourished children and the elderly, have not been able to access full and unhindered aid from the UN and other international agencies since October 2014 and remain in the camps without sufficient food, proper sanitation and other daily needs. As rainy season begins, expected increase in dengue fever and other life threatening diseases will put tens of thousands of IDPs at risk, especially without adequate medical supplies. Access to IDPs in KIA controlled areas rests largely on travel authorization granted by the Burma/Myanmar Government, which continues to restrict the movement of international humanitarian organizations.

Until now, the IDPs have been receiving a paltry sum of 12,500 Kyat per month, per person (USD 11.00), and despite the ongoing humanitarian emergency and the need for more food, shelter, medical supplies and school supplies, there will be further reduction in aid from the international community as Community Based Organizations (CBOs) struggle to meet the emergency needs. Starting June 2015, the IDPs are expected to receive as little as 200 Kyat per day (USD 0.18) in aid, which is impossible to survive on. The funding cuts will result in further suffering and the loss of dignity for those who have lived in these harsh conditions for the past four years.

The peace talks and the signing of the draft text of the nationwide ceasefire agreement (NCA) have not brought safety and security to the IDPs and those affected by the conflict as the Burma Army continues to repeatedly wage war against ethnic armies in Kachin State and northern Shan State. Since the peace talks began in 2012, fighting has intensified between the Myanmar National Democratic Alliance Army and Ta’ang National Liberation Army, who have been excluded from recent peace talks. This has hindered the peace process and increased the lack of trust in the Government, while discussions of the NCA proceed without meaningful results.

While the Government continues to use its rhetoric of peace and reform to invite donors and investors to continue to fund the peace talks and development projects, some of the heaviest fighting in ethnic areas took place this year as the Burma Army attacked the KIA and civilian population in Laiza with airstrikes for the first time in March 2015. In addition, in November 2014, 23 cadets were slain by the Burma Army when they fired artillery missiles at the KIA’s training academy.

Since breaching the ceasefire agreement in 2011, the Burma Army has committed a litany of human rights abuses that would likely constitute war crimes and crimes against humanity under international human rights and humanitarian law. Cases such as the rape, torture and murder of two young Kachin volunteer teachers in northern Shan State demonstrates the system of impunity that protects the perpetrators of such heinous crimes, further instilling fear and oppressing ethnic communities. Crimes committed with impunity such as forced labor, arbitrary arrest, illegal detention, torture, extrajudicial killing, restricting the provision of humanitarian assistance, rape and other forms of sexual violence merit an immediate international investigation. If the Government hopes to gain trust they must show the political will for a truly democratic reform, and immediately conduct an impartial investigation into these crimes, alongside international investigators. The perpetrators must be held accountable.

On the 4th anniversary of the renewed fighting and war against the Kachin people, we the undersigned organizations strongly urge

The Burma/Myanmar Government to:

The international community and the donor community to: