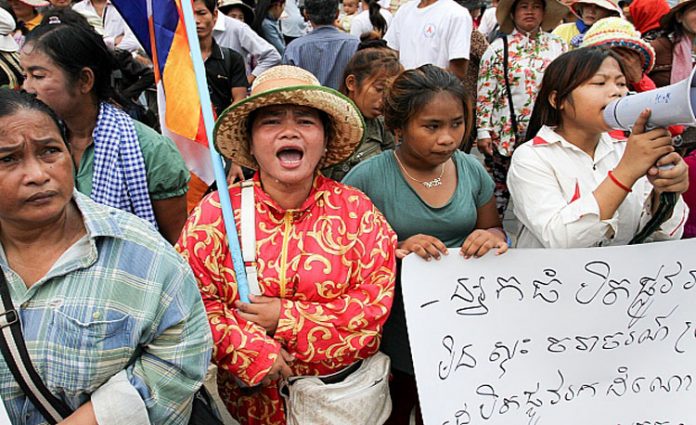 (Bangkok, 22 January 2015) – The Asian Forum for Human Rights and Development (FORUM-ASIA), together with its members the Cambodian Human Rights and Development Association (ADHOC) and the Cambodian League for the Promotion and Defense of Human Rights (LICADHO) calls for the convictions of 11 human rights activists, many of them women from Boeung Kak Lake, to be quashed and for all to be released immediately. Today, the Court of Appeal in Phnom Penh will hear the case of the 11 human activists all convicted on 11-12 November 2014 for exercising their right to freedom of peaceful assembly. For all 11, the hasty trials and wrongful verdicts followed just over 24 hours after their arrest.

“Today’s hearing will once again be a test for Cambodia’s judicial system, which has been used as a tool to intimidate and silence human rights activists in Cambodia. It has been an accessory to the total disregard for accountability in the country. Therefore, the Court of Appeal should correct such impression and immediately and unconditionally overturn the convictions and release all 11, who have been jailed simply for exercising their fundamental rights and freedom to present violations of human rights,” said Ny Chakrya, Head of the Human Rights and Legal Aid Section, ADHOC.

“One of the women land right defenders, Phan Chhunreth, has been repeatedly hospitalised since her arrest and needs immediate medical attention. The wrongful conviction against her, as well as the 10 others, must be overturned and she must be released immediately to receive proper treatment,” said LICADHO Director, Naly Pilorge.

“If the Court of Appeal rules to uphold the verdict, this would be another clear illustration of the repressive culture surrounding land rights in Cambodia; and, at a time Cambodia is under international scrutiny as the UN Special Rapporteur on the situation of human rights in Cambodia, Mr Surya Subedi, is currently in the country conducting his last country visit in his capacity as the Mandate Holder,” said Evelyn Balais-Serrano, Executive Director of FORUM-ASIA. “These unjust practices of arbitrary arrests, charges and convictions must stop. The government obviously uses its laws to suppress the rights of people and curtail their freedoms,” Balais-Serrano emphasized.

FORUM-ASIA, ADHOC and LICADHO reiterate that the Cambodian government should act in conformity with relevant international human rights standards including the United Nations Declaration on Human Rights Defenders which provides for the support and protection of human rights defenders in the context of their work. In addition, the Cambodian courts should be a bastion of public trust, enforcing the law in a fair and independent manner. Both institutions must impress upon the world that justice in Cambodia is possible.
Background

On 11 November 2014, land rights activists Tep Vanny, Nget Khun, Song Sreyleap, Kong Chantha, Pan Chunreth, Bop Chorvy and Nong Srengand were sentenced to the maximum penalty of one year imprisonment after being charged under Article 78 of the Traffic Law for obstructing traffic while staging a protest highlighting the extreme flooding problems resulting from the filling-in of Boeung Kak lake by Shukaku, a company owned by Cambodian People Party (CPP) Senator Lao Meng Khin. They were each ordered to also pay the maximum fine of 2 million riel (approx. US$500). The next day, the Phnom Penh Municipal Court sentenced three more land right activists and one monk to one year in prison and a fine of US$500 after convicting them of obstructing a public official with aggravating circumstances under Article 504 of the Criminal Code. Heng Pich, Im Srey Touch and Phoung Sopheap and monk Venerable Seung Hai, were arrested while taking part in a peaceful gathering in front of the court to call for the release of seven detained Boeung Kak Lake activists. Of the seven women sentenced on 11 November, five (Tep Vanny, Nget Khun, Kong Chantha, Pan Chhunreth and Song Srey Leap) already had standing convictions from a 2012 case related to their peaceful demonstration over a land dispute that has led to the displacement of over 3,500 families. In that case, the municipal court convicted 13 women from Boeung Kak Lake and sentenced them to lengthy prison terms on baseless charges of obstructing public officials with aggravating circumstances and illegally occupying land in a three-hour summary trial. The Appeal Court released them a month later after reducing their sentences to time served, but upheld the convictions.