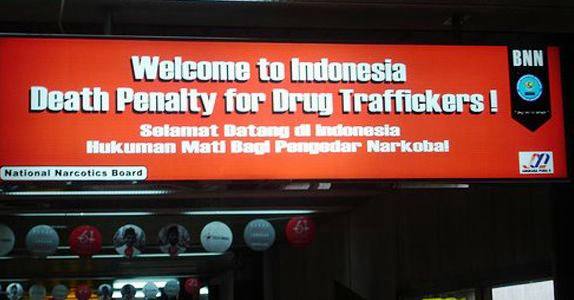 We call for the solidarity of international community to fight for the right to life of the six death row inmates . The death penalty has no place in the world, in the modern legal system.

The Commission for The Disappeared and Victims of Violence strongly condemn the statement of the Attorney General who stated that the executions is a proven commitment of the government to eradicate the drugs crime and ask to those who oppose death penalty to understand the crisis situation of drugs crime in Indonesia. The statement also does not reflect the institutional agenda of the Attorney General Office on global trends abolition of the death penalty in accordance with the global human rights agenda.

We are pessimistic that the executions would effectively cut the chain of the drugs crimes. The Indonesian government should have known on how to break the chain of the organizations who running illicit drugs in complex networks, yet the Government also has to protect the right to life as stated in National and International Human Rights principle.

The upcoming death penalty executions and the statement of the Attorney General have reflected the setback of the government of Indonesia in order to upholding human rights. Previously, Indonesia took a progressive step to impose death penalty de facto moratorium  during 2008- 2013. Unfortunately, the government of Indonesia ended the de facto moratorium after the execution of Ademi Wilson in March 2013, and continuing the executions until now.

Those six convicted for drug crimes have a non-derogable right which could not be taken in any circumstance, which is the right to life (Article 28A of the 1945 Indonesian Constitution), including the guarantee of the right to life contained in Article 6 of the International Covenant on Civil and Political Rights (ratified by the Government through Law No. 12/2005).
Those inmates consist of 4 (four) male and 2 (two) female with 5 of them are foreigner and one of them is Indonesian citizens. Inter alia;

The death penalty executions are not in line with the mandate of the Human Rights Council, where Indonesia is re-elected as a member, for the fourth terms. The executions plan to those 6 (six) inmates will tarnish Indonesian face in the international human rights stage.

This is the right time for Indonesia as a democratic country, leading in regional fora, with  a big role on the development of human rights internationally, to prove the world its commitment on upholding human rights by abolishing the death penalty, or at the very least to impose de facto moratorium on death penalty and suspending the executions of the six people.

We call for the solidarity of international community to fight for the right to life of the six death row inmates . The death penalty has no place in the world, in the modern legal system.