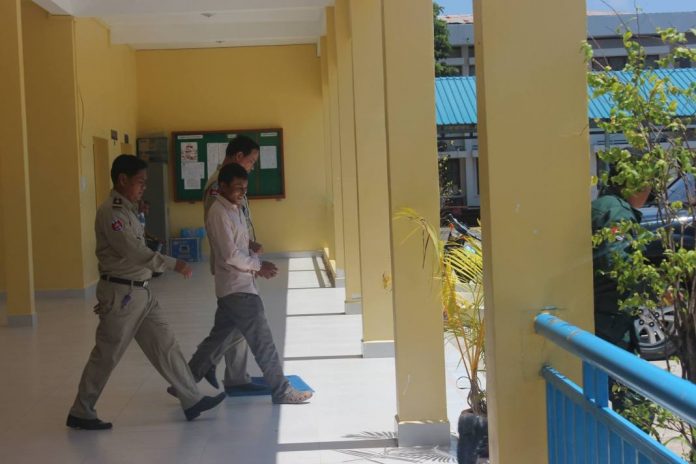 A complaint has been submitted to the UN Special Rapporteur on the situation of human rights defenders, Michel Frost, requesting his urgent intervention to stop the ongoing persecution of four human rights defenders opposing dam and mining projects in Koh Kong province of Cambodia. The four defenders, namely Ven Vorn, an indigenous Chong community leader and San Mala, Sim Somnang and Try Sovikea, staff members of an activist movement Mother Nature, have been facing serious judicial harassment from Cambodian governmental and judicial authorities.

The three Mother Nature staff members have been serving pre-trial detention for more than seven months now after Cambodian authorities charged them with “threat to commit destruction followed by an order”. The community leader, Ven Vorn was recently released after almost five months in jail after being found guilty of “forest crimes” which carried a one-year sentence but seven months were suspended. The charges and conviction against the four are clearly linked to their activism for defense of environmental rights and the rights of indigenous peoples in Areng Valley of Koh Kong province. Their activities have been mainly in opposition to Stung Cheay Areng Dam planned for construction in the valley by Chinese state-owned company Sinohydro and other destructive projects in the province such as sand mining. Pre-trial detention is explicitly stated in Cambodia’s Procedures of the Criminal Code as a last-resort measure. The harassment of the three human rights defenders is clearly aimed at sanctioning their legitimate human rights actions.

Further, in February 2016, three Mother Nature founders have also been charged with being accomplice to the charges of the Mother Nature staff members. The three founders comprise of two Cambodian monks and a Spanish citizen, Alejandro Gonzalez-Davidson, who is currently in forced exile from Cambodia having been effectively deported on the orders of Prime Minister Hun Sen almost one year ago.

Though the charges against the two Buddhist monks have been dropped, charges against González-Davidson remain. Although Cambodian law clearly stipulates that all charged individuals must have the right to be present during their trials as required in international human rights standards, the Cambodian government continues to violate the right to a fair trial. Visa applications by González-Davidson have been repeatedly ignored, which represents further evidence that the upcoming trial against himself and the three Mother Nature staff members will be little more than arbitrary and clearly not based on incriminating evidence against them.

Asia Indigenous Peoples Pact, along with Cambodia-based Mother Nature, Cambodia Indigenous Peoples Alliance and Cambodia Youth Network, submitted the joint complaint to the Special Rapporteur on the situation on human rights defenders on Tuesday. The organisations have requested the Special Rapporteur to jointly examine the communication with other concerned Special Rapporteurs and correspond with the Government of Cambodia for them to take necessary steps, without any delay, to end the detention of the three defenders, review the conviction of Ven Vorn, ask the that the Government guarantees the right to a fair trial of González-Davidson, and halt the oppression of Mother Nature and related individuals.

Further, they have urged the Special Rapporteur to take into account the record of the government of Cambodia in relation to their obligations in the protection of human rights. Human rights violations are taking place particularly in the course of implementing destructive projects in the name of development, without taking into account the serious impacts of such projects to the rights, livelihoods and wellbeing of affected communities, including indigenous peoples. Those opposing such projects including human rights defenders are often subjected to violations of their civil and political rights with the use of national laws that contravenes international human rights standards, such as the International Covenant on Civil and Political Rights, which Cambodia is a State party to. The government of Cambodia has also recently adopted a resolution regulating the advocacy activities of non-government organizations, which further curtails their fundamental rights and freedoms, the complaint states.

Equally concerning is the continued use of judiciary measures by powerful state and non-state actors, who see Cambodia’s growing environmental and human rights movement as a threat to their economic and political interests. The organisations have thus appealed the Special Rapporteur to call the attention of the government on their obligation to respect, protect and fulfill human rights, and engage constructively with the human rights defenders as well as to take measures to ensure independence of judiciary.