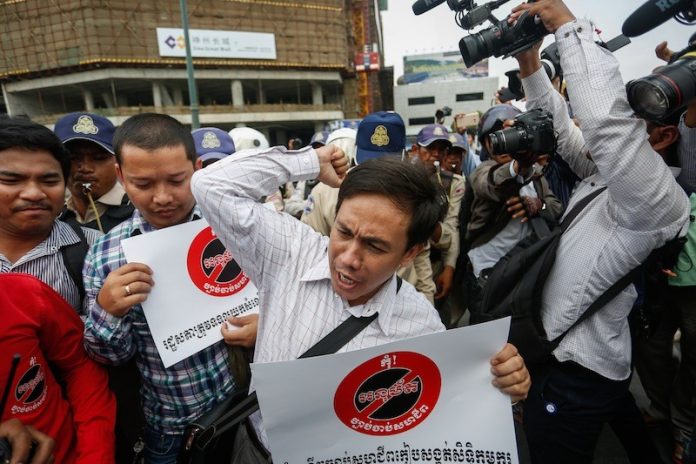 The collective of regional lawmakers argued that the legislation, which was approved by the National Assembly on Monday, contains provisions that threaten freedom of association in Cambodia and undermines the ability of unions to serve their intended purpose of representing workers’ interests.

“Workers’ rights are human rights. It is critical that trade unions be allowed the freedom to operate and faithfully represent the interests of their members,” said APHR Chairperson and Malaysian MP Charles Santiago.

“This law includes burdensome restrictions on the right of workers to organize freely and subjects unions to undue government interference. It appears, yet again, that ASEAN governments are prioritizing questionable policies in the supposed interest of promoting investment, while failing to protect their own people.”

Parliamentarians echoed concerns previously voiced by trade unions and rights groups inside Cambodia, including concerns about the lack of adequate consultation during the drafting process. In passing the law, the National Assembly ignored specific recommendations from these groups, as well as their international counterparts, including calls to expand the scope of the law to include workers in the informal economy, eliminate intrusive requirements on forming local unions and striking, and limit opportunities for interference by the state into union affairs. The final law contains vaguely worded provisions that could be used to restrict organizations’ ability to decide on internal matters without interference, violating rights guaranteed under International Labor Organization (ILO) conventions.

“The government failed to heed the concerns of unions and other groups, who represent the interests of Cambodian workers. The failure to conduct genuine, inclusive public consultations is indicative of a flawed process, which precipitated the passage of a flawed piece of legislation,” Santiago said.

APHR Vice Chair Eva Sundari, a member of the Indonesian House of Representatives, emphasized the need for all ASEAN governments to promote international labor standards: “As the region moves to become a single, integrated economy, we must ensure that ASEAN becomes a center of excellence in the implementation of labor standards. We must avoid unhealthy competition between ASEAN states and prevent governments from sacrificing human rights principles as they pursue economic policies.”

Parliamentarians condemned the violent crackdown on protesters demonstrating against the law in Phnom Penh on Monday. Two participants sustained injuries after police moved to disperse the crowd of several dozen demonstrators nearby the National Assembly, hours before the vote on the law took place.

“These workers have a fundamental right to express their grievances through protest and not to be subjected to violence from security forces. It is heartbreaking to see images of this type of behavior from police against citizens voicing legitimate concerns about a law with potentially significant impacts,” said Eva Sundari.

The trade union law now moves to the Senate, which will vote on the legislation soon. APHR urged Senators to reject the law and send it back for adequate consultation and revisions to bring it into line with international standards.