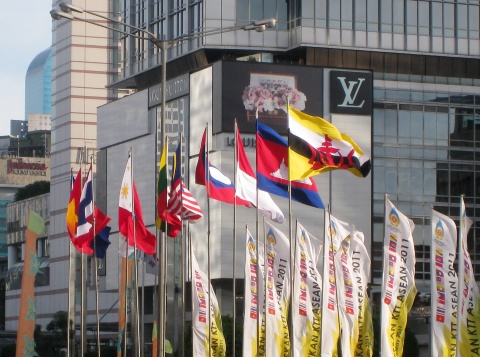 Aiming to be an ASEAN Economic Community (AEC) by 2015, the ASEAN region has accelerated its integration into the global market economy driven by business interests from within and outside ASEAN, with a strong backing by the region’s governments. Projects proposed under the AEC include transport cooperation, energy cooperation and mining cooperation.

Aiming to be an ASEAN Economic Community (AEC) by 2015, the ASEAN region has accelerated its integration into the global market economy driven by business interests from within and outside ASEAN, with a strong backing by the region’s governments. Projects proposed under the AEC include transport cooperation, energy cooperation and mining cooperation. Much political emphasis has been placed on the AEC to further liberalise the region’s economy and facilitate trade and investment. Far less emphasis has been placed on addressing the social and environmental consequences of economic growth and safeguarding human rights, which are within the mandate of the ASEAN Intergovernmental Commission on Human Rights (AICHR) and the ASEAN Commission on the Promotion and Protection of the Rights of Women and Children (ACWC).

ASEAN integration has also entailed the construction of large infrastructure (such as roads, hydropower dams and fossil fuel-fired power stations), proliferation of the mining industry, creation of polluting industrial zones, and the expansion of a range of land-intensive agro-business. Development-induced displacement is also endemic and many people are losing access to the natural resources upon which they depend. Development based on resource extraction and exploitation not only leads to environmental degradation, but in a number of cases has also triggered violations of human rights by government and business without redress. Increasingly, human rights defenders in ASEAN working to expose human rights abuses in these connections are more vulnerable to threats from both State and non-State actors.

Nevertheless, several initiatives to address these issues have taken place within the ASEAN region. In October 2010, organisations from five ASEAN member States – Singapore, Indonesia, Malaysia, Thailand and the Philippines – established the ASEAN CSR Network. In 2013, at least two reports on business and human rights were produced by NGOs, namely: the Human Rights Resource Centre (HRRC) report ‘Business and Human Rights in ASEAN: A Baseline Study’, and a FORUM-ASIA report entitled ‘Corporate Accountability in ASEAN: A Human Rights-Based Approach’.

Finally, in June 2014, the AICHR published its long-awaited first thematic study which focused on Corporate Social Responsibility and Human Rights in ASEAN.[1] Similar to FORUM-ASIA’s report, the AICHR’s report admits that the concept of CSR has its limitation to be used as a tool for promotion and protection of human rights, especially for its voluntary principle. Nevertheless, the report recognised the importance of CSR for awareness-raising and recognition of the role of the business sector towards human rights. The report also encourage ASEAN Members States to further accelerate and strengthen the implementation and enforcement of the existing rules and regulations that deal directly with such adverse impacts of business conducts at national and regional level. Despite the prolonged process and the lack of consultation with broader stakeholders, particularly CSOs, the report shows an important start for ASEAN, particularly through its human rights body, the AICHR, to recognize and to envisage future policy framework on human rights based approach in the work of business in ASEAN region.
——————————————-