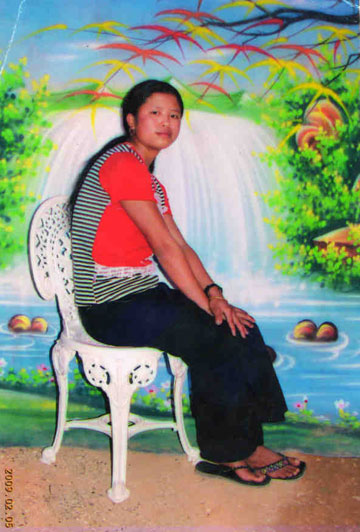 On the third anniversary of the abduction of Sumlut Roi Ja, an ethnic Kachin woman from Burma, we, the undersigned organizations, call on the Burmese government to thoroughly investigate her enforced disappearance and hold the perpetrators accountable.

On the third anniversary of the abduction of Sumlut Roi Ja, an ethnic Kachin woman from Burma, we, the undersigned organizations, call on the Burmese government to thoroughly investigate her enforced disappearance and hold the perpetrators accountable.

Soldiers suspected the three had ties to the Kachin Independence Army (KIA) – an ethnic armed opposition group. The soldiers ordered the three at gunpoint to carry corn to their outpost on Mubum mountain. Sumlut Roi Ja’s husband and father-in-law managed to escape, evading the soldiers’ gunfire, on the way. Witnesses saw Sumlut Roi Ja at the camp several days before she disappeared.

The case of Sumlut Roi Ja underscores the ongoing serious human rights violations perpetrated by the Burma Army in Kachin State, including the deliberate targeting of civilians in conflict, extra-judicial killings, arbitrary detention, and violence against women. More than 70 cases of sexual violence by Burma Army soldiers against women and young girls in Kachin State and Northern Shan State have been recorded between the resumption of conflict between the Burma Army and the KIA in June 2011 and June 2014. At least 20 of the victims were killed.

As 2014 Association of Southeast Asian Nations (ASEAN) Chair, Burma has a particular responsibility to uphold the principles of the ASEAN Human Rights Declaration (AHRD), which stipulates that all individuals have a right to life and to personal liberty and security and that no person shall be subject to arbitrary arrest, search, detention, abduction or any other form of deprivation of liberty. The AHRD also recognizes the right of every person to an effective and enforceable remedy for violations of rights granted by the constitution or by law.

We, the undersigned organizations, urge the Burmese government to: