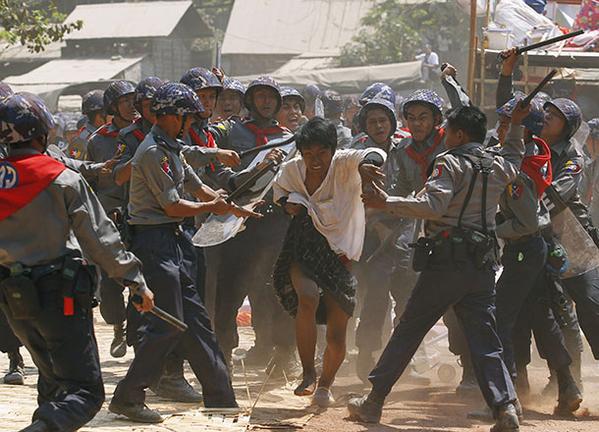 (Bangkok/Yangon/Geneva, 10 March 2015): The Asian Forum for Human Rights and Development (FORUM-ASIA) and its member Equality Myanmar, together with Burma Partnership, condemned the Burmese government’s continuing series of brutal crackdowns against peaceful student protestors advocating for education sector reforms. The violent dispersal and attack on crowds, including through the deployment of vigilante groups, casts serious doubt on the government’s vaunted reformist credentials, the groups warned as the country-wide protests against the restrictive National Education Law escalates. It also comes at a time when Burma’s human rights record will be scrutinized by the international community at the ongoing 28th session of the Human Rights Council from 2-27 March 2015.

The protest against the National Education Law centers on concerns around the undue curtailment of academic freedom, arbitrary centralization of decision-making on education policy and curriculum matters and restrictions against the formation of student and teachers unions, among others. It is also set against a backdrop of wider clampdowns against peaceful protests in the country, with land rights activists and striking garment factory workers recently also similarly subjected to threats and arrests in December 2014 (Letpadaung) and February 2015 (Yangon) respectively. The Letpadaung clash also involved the fatal shooting of villager Khin Win by the police. Recent amendments to the Peaceful Assembly Act, passed in June 2014, were also discernably more restrictive and punitive.

FORUM-ASIA, Equality Myanmar and Burma Partnership called to attention the shrinking democratic space in the country as the early optimism surrounding Burma’s political and democratic transition in 2011 increasingly dissipates. In her latest report to the UN Human Rights Council just published yesterday, the UN Special Rapporteur on the situation of human rights in Myanmar, Ms. Yanghee Lee echoed these sentiments and asserted “the ability of people to assemble and voice their grievances is a necessary requirement for reform and accountability” and that “significant reform is still required for this to be achieved”.

“These recent developments showcase the current government’s growing intolerance of legitimate dissent and criticism of its policies, and its readiness to employ similar tactics from the previous regime’s repressive repertoire,” said Evelyn Balais-Serrano, Executive Director of FORUM-ASIA.

The latest series of protests occurred after quadripartite negotiations between the government, Parliament and civil society representatives broke down. Widespread arrests and charges (under Section 18 of the Peaceful Assembly Law) were also made, as law enforcement personnel ramped up their efforts to quell dissent by any means necessary. These include the issuance of threats by the Home Minister and local township administrations, as well as the forcible dispersal, chasing down and attacks of peaceful protestors by hired thugs sporting red armbands that read “Duty”.

The groups reminded the government not to undermine the notable gains achieved through peaceful and democratic means since negotiations on the controversial National Education Law began in November 2014. They include, among others, an invitation by the Bills Committee of the Upper House to concerned stakeholders to attend the Parliamentary hearings on the bill after the government had sent it back for further deliberations.

Last Thursday’s Parliamentary hearing boycott by civil society representatives, in solidarity with demonstrators around the country, has already left the negotiation process in a precarious state. Despite lifting blockades of major roads into Yangon before the 10am deadline today, tense standoffs between peaceful demonstrators and law enforcement personnel remain throughout the country. Non-negotiable conditions, including the ban against raising and sporting flags, headbands or armbands as well as singing en route to Yangon, were imposed by the Pegu Division Border Affairs Minister Col. Thet Tun.

Following a week-long stalemate, demonstrators in Letpadan were once again viciously attacked by the police today. Student protestors and their supporters, including monks and villagers, were beaten and hauled onto police trucks, with a further ten casualties reported. Injured people brought into ambulance vehicles provided by the Free Funeral Service were also not spared from the attacks.

“The brutal and indiscriminate assault on the demonstrators is a blatant and serious violation of international human rights norms and standards in relation to regulating public assemblies, including the UN Basic Principles on the Use of Force and Firearms by Law Enforcement Officials,” stressed Aung Myo Min, Executive Director of Equality Myanmar.

“The government must recognize and respect the rights of students, who are advocating for education sector reforms during this critical transition period, to peacefully assemble and express themselves without any fear of reprisals or intimidation by the authorities,” added Aung Myo Min.

“We urge the government to conduct an immediate, independent and transparent investigation into the human rights abuses and violations committed by both State and non-State security forces since protests commenced last Tuesday, and to take swift action to hold those responsible accountable,” said Khin Ohmar, Coordinator of Burma Partnership.

Equality Myanmar is a non-governmental organization that facilitates a broad range of human rights training and advocacy programs for grassroots organizations, political party and community.

Burma Partnership is a network of organizations throughout the Asia-Pacific region, advocating for and mobilizing a movement for democracy and human rights in Burma.