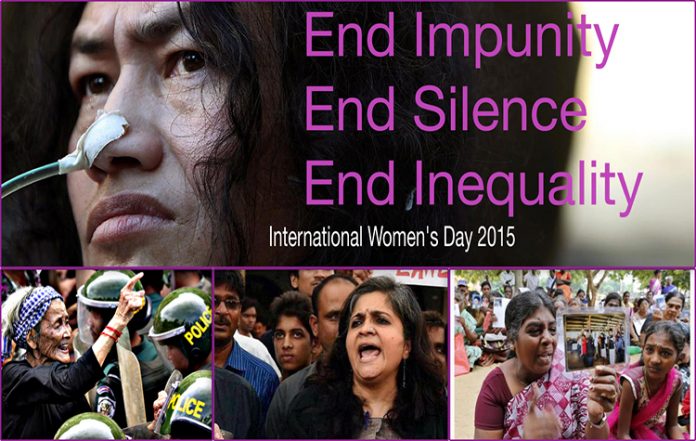 We celebrate, particularly the  women human rights defenders’ (WHRDs) courageous struggle towards advancement of all human rights. In Asia, WHRDs are often victims of harassment and discrimination. Many WHRDs who are on the front line in the struggle for human rights face greater risks and more serious consequences involving not only themselves, their families but also their communities.

As we commemorate International Women’s Day, FORUM-ASIA joins the international community in celebrating the  achievements of women worldwide and pay tribute to their significant contribution to international peace, human rights and development.

We celebrate, particularly the  women human rights defenders’ (WHRDs) courageous struggle towards advancement of all human rights. In Asia, WHRDs are often victims of harassment and discrimination. Many WHRDs who are on the front line in the struggle for human rights face greater risks and more serious consequences involving not only themselves, their families but also their communities.

As we celebrate International Women’s Day, FORUM-ASIA recognizes some of the  WHRDs who continue to face discrimination, criminalisation, harassment and false charges and whom we continue to campaign on their behalf:

In India, the civil and political activist Irom Sharmila Chanu, commonly referred to as the Iron Lady of Manipur, began a hunger strike in 2000 protesting the Indian government’s use of the draconian Armed Forces (Special Power) Act, 1958 (AFSPA).  She has since been subjected to a vicious cycle of arrests and criminalisation. The same harassment faced now by another brave social activist, Teesta Setalvad, who continues to face harassment through trumped-up charges in connection with her work to achieve justice for the victims of the Gulbarg Society Massacre during the horrific 2002 communal riots in Gujarat.

In Sri Lanka, Balendran Jayakumari and her 13-year old daughter B. Vibooshika are currently detained following their arrest in March 2014. Jayakumari, whose own son was disappeared, and her daughter have prominently advocated against disappearances in the country and were leading voices in demanding the whereabouts of missing persons arrested by the Criminal Investigation Department (CID) of Sri Lanka.

In Cambodia, 10 WHRDs protecting land rights issues were sentenced in November 2014 to 1 year’s imprisonment following a peaceful protest about the continuing flooding of their homes. Seven of them have been active campaigners for several years and have frequently faced judicial harassment and arrest.

The 1995 Beijing Declaration and Platform for Action which marks its 20th anniversary this year and the UN Security Council’s Resolution 1325 on Women, Peace and Security which is on its 15th year both highlighted a key demand of accountability and protection of women during armed conflict and their role and participation in peace building. They emphasized the responsibility of governments to end impunity for genocide, crimes against humanity, war crimes, including crimes relating to sexual violence against women and girls.

We celebrate women’s initiatives in coming up with these historic milestones in advancing women’s rights. However, despite all the commitments made by governments, including those from Asia, through these instruments, violations have continued to be committed in many countries in the region, with impunity.

FORUM-ASIA, together with the Women Human Rights Defenders International Coalition, of which it is a member, calls the international community for sustained support to the many WHRDs in Asia who continue to be victims of all forms of violations of human rights. In observance of this historic day, FORUM-ASIA reiterates its call to action for the protection of WHRDs, in particular: