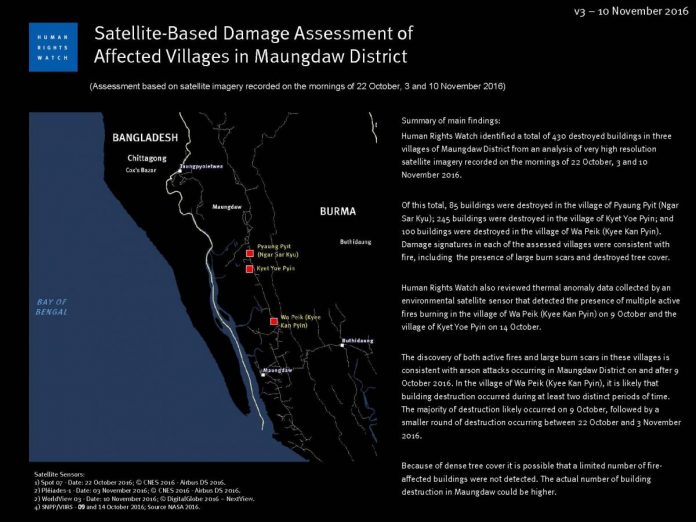 Human Rights Watch identified a total of 430 destroyed buildings in three villages of northern Maungdaw district from an analysis of very high resolution satellite imagery recorded on the mornings of October 22, November 3, and November 10, 2016. Of this total, 85 buildings were destroyed in the village of Pyaung Pyit (Ngar Sar Kyu), 245 in Kyet Yoe Pyin, and 100 in Wa Peik (Kyee Kan Pyin).

(New York) – High-definition satellite imagery shows widespread fire-related destruction in ethnic Rohingya villages in Burma’s Rakhine State, Human Rights Watch said today. The Burmese government should immediately invite the United Nations to assist in investigating reported destruction of villages in the area.“New satellite images not only confirm the widespread destruction of Rohingya villages but show that it was even greater than we first thought,” said Brad Adams, Asia director at Human Rights Watch. “Burmese authorities should promptly establish a UN-assisted investigation as a first step toward ensuring justice and security for the victims.”

Human Rights Watch identified a total of 430 destroyed buildings in three villages of northern Maungdaw district from an analysis of very high resolution satellite imagery recorded on the mornings of October 22, November 3, and November 10, 2016. Of this total, 85 buildings were destroyed in the village of Pyaung Pyit (Ngar Sar Kyu), 245 in Kyet Yoe Pyin, and 100 in Wa Peik (Kyee Kan Pyin). Damage signatures in each of the assessed villages were consistent with fire, including the presence of large burn scars and destroyed tree cover. Because of dense tree cover it is possible that the actual number of destroyed buildings is higher.

In addition to satellite imagery reviewed by Human Rights Watch, reports by human rights organizations, the media, and members of a delegation of nine foreign ambassadors who visited some impacted areas on November 2-3 confirm that the damage was substantial. The delegation conducted no formal investigation or assessment but confirmed that they saw burned structures in several towns.

The crisis follows violence on October 9 in which gunmen attacked three police outposts in Maungdaw township in northern Rakhine State near the Bangladesh border, leaving nine police officers dead. The government said that the attackers made off with dozens of weapons and thousands of rounds of ammunition. The Burmese government asserts the attack was carried out by a Rohingya group, but actual responsibility remains unclear.
Immediately after the attacks, government forces declared Maungdaw an “operation zone” and began sweeps of the area to find the attackers and lost weapons. They severely restricted the freedom of movement of local populations and imposed extended curfews, which remain in place. A UN-assisted investigation needs to examine the deadly attacks on border guard posts on October 9, and allegations by the media and local groups that government security forces subsequently committed summary killings, sexual violence, torture, arbitrary arrests, arson, and other abuses against Rohingya villagers in Maungdaw district, Human Rights Watch said.

On October 28, Reuters published interviews with Rohingya women who allege that Burmese soldiers raped them. The government also allegedly pressured the Myanmar Times to fire one of its editors who reported allegations of rape by Burmese army soldiers. Government-imposed restrictions on access to the area by journalists and human rights monitors continue to hinder impartial information gathering.

A second attack on a border guard post in Maungdaw was reported to have occurred on November 3. The attack reportedly resulted in the death of one police officer.

Burma is obligated under international law to conduct thorough, prompt, and impartial investigations of alleged human rights violations, prosecute those responsible, and provide adequate redress for victims of violations. Standards for such investigations can be found, for example, in the UN Principles on the Effective Prevention and Investigation of Extra-legal, Arbitrary and Summary Executions, and the UN Guidance on Commissions of Inquiry and Fact-Finding Missions. Burma’s failure to conduct such investigations in the past underscores the need for UN assistance, Human Rights Watch said.

Reuters has reported that the military has ignored the civilian government’s request for more information about the situation.

“The Burmese armed forces are not only keeping independent observers out of affected Rohingya areas, they apparently aren’t even telling their own government what happened,” Adams said. “The authorities need to allow the UN, the media, and rights monitors unfettered access into the area to determine what happened and what needs to be done.”

The government recently granted the World Food Programme (WFP) access to four villages for a one-time food delivery. However, humanitarian aid groups continue to be denied full access, placing tens of thousands of already vulnerable people at greater risk. The vast majority of villages are not receiving any assistance, and the area remains sealed to humanitarian assessment teams and human rights groups. A statement by the UN Children’s Fund (UNICEF) on November 8 noted that the children in northern Rakhine State already suffer from high levels of deprivation and malnutrition. “Their futures depend on help from doctors, nurses, teachers and others who can provide them with nutrition, health and education services,” the statement said.

The Burmese government should immediately deliver on its assurances to resume humanitarian aid to all impacted areas, Human Rights Watch said.

“The Burmese government and military should immediately allow humanitarian access to vulnerable populations,” Adams said. “The UN and concerned governments need to dial up the pressure on the authorities to ensure aid reaches all affected areas as this crisis enters its second month.”