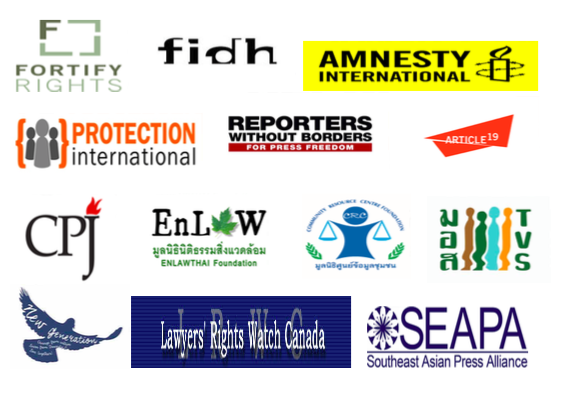 We, the undersigned organizations, urge the Thai government to protect press freedom, decriminalize defamation, and bring the 2007 Computer-related Crime Act into line with international law and standards, including the right to freedom of opinion and expression.

(Bangkok, November 15, 2016)– We, the undersigned organizations, urge the Thai government to protect press freedom, decriminalize defamation, and bring the 2007 Computer-related Crime Act into line with international law and standards, including the right to freedom of opinion and expression.

We call on the mining company Tungkum Limited to immediately and unconditionally withdraw all criminal proceedings against Thai Public Broadcasting Service (Thai PBS) and four media professionals currently or formerly employed by Thai PBS. In line with the UN Guiding Principles on Business and Human Rights, Tungkum Ltd. should protect and respect human rights and remedy any adverse impacts that may be related to its operations.

Tungkum Ltd., a Thai-registered gold-mining company, is claiming that Thai PBS damaged the reputation of Tungkum Ltd. when it reported on allegations of adverse environmental impacts connected to the company’s open-pit gold mine in Loei Province in northeastern Thailand. Thai PBS and its journalists are facing potential charges of criminal defamation under the Thai Criminal Code and the Computer-related Crime Act as well as other charges. The company is seeking 50 million Thai Baht (US$1.4 million) in compensation as well as the revocation of Thai PBS’s operating license for five years. The Criminal Court in Bangkok will issue a preliminary decision on the putative merits of the company’s complaints at a hearing scheduled for November 16, 2016. If the court accepts the case, it will proceed to trial.

On September 1, 2015, Thai PBS aired a citizen-journalist news clip about a youth camp that was raising awareness of environmental issues in Wang Sa Pung District, Loei Province. A 15-year-old schoolgirl who attended the youth camp narrated the Thai PBS news clip, in which she alleged six villages in the gold mining area had been “environmentally affected by the gold mining industry.”

On November 12, 2015, Tungkum Ltd. filed complaints against journalist Ms. Wirada Saelim; then-Director General of Thai PBS Mr. Somchai Suwanbun; Mr. Korkhet Chantalertluk, Director of the News Department at Thai PBS; Mr. Yothin Sitthibodeekul, Director of the Television and Radio Department at Thai PBS; and Thai PBS itself. The complaint alleges that content of the citizen-journalist news clip damaged the reputation of the company.

We remain concerned about the use of criminal defamation laws and the Computer-related Crime Act to restrict the right to freedom of opinion and expression in Thailand as well as to intimidate human rights defenders and journalists.

The right to freedom of expression is protected under Article 19 of the International Covenant on Civil and Political Rights (ICCPR), to which Thailand is a state party. Under international law, restrictions on freedom of expression are permissible only when provided by law, proportional, and necessary to accomplish a legitimate aim. The complaints and charges against Thai PBS, journalists, and members of the KRBKG represent an overly broad application of criminal law which violates the right to freedom of expression. Criminalizing free expression creates a chilling effect on the media and human rights defenders whose reporting, not least of environmental and human rights issues, essentially serves the public interest.

If convicted of criminal defamation under Section 328 of the Thai Criminal Code and Section 14 of the 2007 Computer-related Crime Act, Thai PBS journalists would face up to five years’ imprisonment, 200,000 Thai Baht (US$5,600) in fines, or both.

Imprisonment for defamation is a disproportionate restriction on the right to freedom of expression and never an appropriate form of punishment for defamation, according to the UN Human Rights Committee, the expert body charged with overseeing the implementation of the ICCPR. Thailand should immediately decriminalize defamation and reject proposed amendments of the 2007 Computer-related Crime Act which have raised human rights concerns as set out in a joint statement by five international organizations on October 25, 2016. The statement called on Thailand to uphold its international obligations to protect the rights to privacy and freedom of opinion and expression.

The right to freedom of opinion and expression is foundational for any society. These freedoms promote transparency, accountability, and the protection of other human rights. Thailand will only benefit when human rights defenders, journalists, and the media are allowed to practice their professions peacefully and carry out activities without fear of intimidation or judicial harassment.