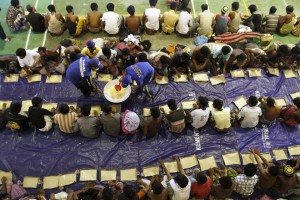 ASEAN Parliamentarians for Human Rights today welcomed the decision by Indonesia and Malaysia to provide temporary shelter to 7,000 migrants stranded at sea, but continued to demand that regional leaders address the state-sponsored persecution of Rohingya in Myanmar that lies at the root of the mass exodus.

JAKARTA – ASEAN Parliamentarians for Human Rights today welcomed the decision by Indonesia and Malaysia to provide temporary shelter to 7,000 migrants stranded at sea, but continued to demand that regional leaders address the state-sponsored persecution of Rohingya in Myanmar that lies at the root of the mass exodus.

“Temporary shelter is better than floating coffins, but this agreement is far from what is needed to combat the growing crisis,” said APHR Chairperson Charles Santiago, a member of parliament in Malaysia. “A comprehensive solution must do more than temporarily address the needs of a mere 7,000 refugees. It must include a regional plan of action to push the Myanmar government to end its systematic persecution of over 1.3 million people.”

The agreement reached yesterday following a meeting in Kuala Lumpur between the foreign ministers of Indonesia, Malaysia, and Thailand, represented a breakthrough in the crisis that has left thousands of Rohingya and Bangladeshi migrants stranded in the Andaman Sea with few provisions.

The agreement, however, lacked a specific framework for dealing with these refugees in the long term. APHR also warned that there remains an urgent need for search and rescue operations to find migrants still stranded in international waters.

“Those seeking asylum must be given access to proper refugee screening procedures,” Santiago said. “The majority of these people are fleeing persecution and deplorable conditions in Myanmar, and therefore must be granted the right to resettlement.”

APHR reiterated the need for a strong regional framework on refugees, and urged all ASEAN member states to sign onto the 1951 Refugee Convention. Currently only two member states—Cambodia and the Philippines—are signatories. APHR also called on ASEAN governments to agree on a binding regional anti-trafficking agreement.

The collective of parliamentarians also criticized the Thai government for its failure at Wednesday’s meeting to agree to take in any migrants, as well as for recent comments by Thai Army Chief General Udomdej Sitabutr claiming that Rohingya do not qualify as refugees because they are illegal immigrants.

“Statements from high-ranking Thai officials supporting the Myanmar government’s bogus narrative that Rohingya are illegal immigrants are shocking and shameful,” said Santiago. “Combined with the decision not to take in any of those stranded at sea, they represent a colossal failure of regional leadership on the part of Thailand.”

APHR stressed the need for an upcoming meeting of regional leaders in Bangkok to address the issue at the heart of the current crisis: the state-sponsored persecution of Rohingya in Myanmar. While parliamentarians welcomed Myanmar’s announcement late yesterday that it would attend the meeting on 29 May, they called on ASEAN to cast aside its policy of non-interference and confront the Myanmar government’s discriminatory policies head on.

“ASEAN leaders cannot continue to hide behind the principle of non-interference,” Santiago warned. “ASEAN’s response thus far has been an embarrassment, and without taking proactive steps to pressure the Myanmar government, the problem will only grow larger.”

The broader international community, including the United States, must also take a stronger stand, APHR said. The collective of parliamentarians urged international actors to pressure the Myanmar government directly to end its persecution of Rohingya and to push ASEAN to address the situation in Myanmar at the regional level.

“With international attention currently focused on this terrible tragedy, now is the time for the international community to act,” Santiago said. “The United States and other actors should leverage the attention to bring collective pressure on ASEAN governments to address Myanmar’s treatment of Rohingya.”