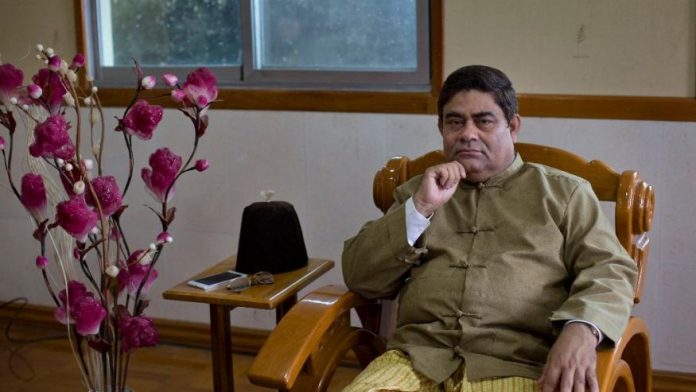 Parliamentarians from Southeast Asia denounced as a sham an appeal process by the Rakhine State Election Commission here today, which upheld an earlier ruling disqualifying Myanmar MP U Shwe Maung from standing for reelection later this year.

SITTWE, MYANMAR, 1 September 2015 – Parliamentarians from Southeast Asia denounced as a sham an appeal process by the Rakhine State Election Commission here today, which upheld an earlier ruling disqualifying Myanmar MP U Shwe Maung from standing for reelection later this year.

Myanmar is set to hold national elections on 8 November, and a number of candidates have been banned by election authorities from running based on unfounded grounds that contravene basic democratic principles and human rights, ASEAN Parliamentarians for Human Rights (APHR) said.

Shwe Maung, an ethnic Rohingya politician who was elected in 2010 as an MP representing Buthidaung Township in Myanmar’s Rakhine State, lodged the appeal following a local election commission’s 22 August decision to reject his candidacy on the specious grounds that his parents were not citizens at the time of his birth.

Cambodian Member of Parliament and APHR board member Son Chhay travelled to Sittwe to support Shwe Maung at the appeal hearing, which took place at the headquarters of the Rakhine State government. Son Chhay criticized the verdict, arguing that it contravenes democratic principles and basic human rights.

“This was not a fair appeal. Our honorable colleague was not allowed to speak or present any evidence to defend his position,” Son Chhay said following the announcement.

“The right to stand for election is as fundamental as the right to vote itself. Rejecting Shwe Maung’s candidacy directly undermines the credibility of the upcoming elections, the success of which is crucial to Myanmar’s continued democratic development.”

Another ethnic Rohingya candidate, Daw Khin Khin Lwin, was also denied the opportunity to run for office by the State Election Commission today. Her independent candidacy for an Upper House seat in Myanmar’s National Parliament representing Buthidaung was rejected based on similarly absurd citizenship grounds.

“The fact that these decisions appear strongly motivated by ethnic and religious discrimination is particularly concerning,” Son Chhay added.

Despite the urging of international groups, including APHR, to overturn the initial decisions, the Rakhine State Election Commission chose to uphold the verdicts at today’s hearings. U Shwe Maung and Daw Khin Khin Lwin now have seven days to appeal the state commission’s decisions.

“This was not a hearing; it was like hegemony. This is not democracy; it looks like a hegemony,” said Shwe Maung. “I am confident that I have the documents to prove I am a citizen, and that my parents are citizens. But what took place today was not a proper hearing or appeal; it was just an announcement of the decision. They did not take into account any of my explanations. This is not legal. This is not democratic.”

“I will take my appeal to the Union Election Commission in Naypyitaw on September 3,” he added. “Perhaps there I can present my evidence that clearly shows there is no basis to the disqualification on citizenship grounds.”

Parliamentarians on the ground in Sittwe and throughout the region publicly called on the Union Election Commission (UEC) and its Chairman U Tin Aye to intervene.

“The UEC has the power to reverse these decisions and strike a blow for the integrity of the democratic process in Myanmar,” Son Chhay said.

“We urge the UEC Chairman, who has expressed his commitment to ensuring the success of elections, to make the right decision. Grant Shwe Maung the freedom to stand for reelection, and allow all candidates their right to run for office.”

APHR MPs also raised the case of Shwe Maung and other MPs facing disqualification on citizenship grounds with the UEC Chairman when they met in Yangon on Monday, 31 August.