Home Statements Malaysia: Bersih 4.0, A Peaceful Assembly for A Democratic Reform in Malaysia 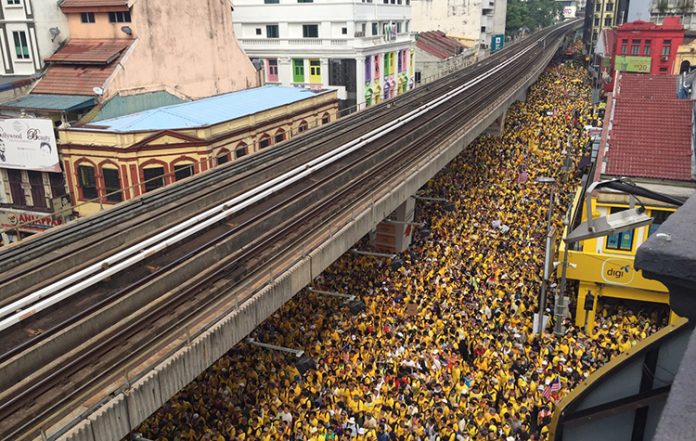 FORUM-ASIA expresses its solidarity with the people of Malaysia for the organisation of “Bersih 4.0”. The two-day peaceful gathering, which took place on 29-30 August 2015 in three cities in Malaysia, as well as in different places across the world, called for: free and fair elections; a transparent government; a better economy; the right to dissent; and a strengthened parliamentary democracy system

(Bangkok, 31 August 2015) – The Asian Forum for Human Rights and Development (FORUM-ASIA) expresses its solidarity with the people of Malaysia for the organisation of “Bersih 4.0”. The two-day peaceful gathering, which took place on 29-30 August 2015 in three cities in Malaysia, as well as in different places across the world, called for: free and fair elections; a transparent government; a better economy; the right to dissent; and a strengthened parliamentary democracy system.

Bersih, which means “clean” in Malay, is a coalition of 84 non-government organisations calling for an electoral reform in Malaysia. Joined by about 200.000 people, Bersih 4.0 specifically demanded the resignation of Prime Minister Najib Razak who has been buffeted by corruption scandals involving state fund 1Malaysia Development Berhad (1MDB).

“We commend the fact that the two-day rally went peacefully and proceeded without any violence. However, declaring Bersih 4.0 an illegal assembly based on Section 9 of the Peaceful Assembly Act[1] is groundless as this provision has been declared unconstitutional by the Court of Appeal in April 2014[2],” stresses Evelyn Balais-Serrano, the Executive Director of FORUM-ASIA.

“The right to freedom of peaceful assembly, as guaranteed under Article 10(1)(b) of the Federal Constitution, is indispensable in a democratic society. Bersih is an important part of a wider process of reform in Malaysia, which is why the Government of Malaysia should listen to and address the legitimate demands of the people and work together to improve the country,” says Sevan Doraisamy, the Executive Director of Suara Rakyat Malaysia (SUARAM).

“The Malaysian government must respect rather than suppress its people when exercising their fundamental rights to freedom of expression and peaceful assembly. It should have done so as well in late July 2015 when it arrested democracy activists, Adam Adli, Syukri Razab, and Mandeep Singh,” adds Evelyn Balais-Serrano. “As Chair of the ASEAN, Malaysia should set an example to the other member states in respecting human rights and democracy to pursue a ‘caring, people-centered ASEAN community’.”