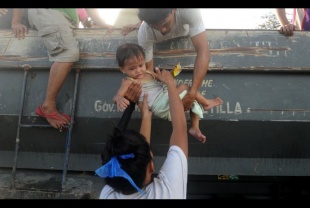 Only weeks after a 7.2 magnitude earthquake ravaged Bohol and nearby islands in the Visayas in central Philippines, super typhoon Yolanda (Haiyan), possibly the most powerful storm in recorded history, released its wrath in the same area, afflicting some 10 million people across 36 provinces and is feared to have claimed more than 10,000 lives according to estimates.

Initial reports say that many coastal towns in Samar and Leyte islands on the Pacific seaboard were severely damaged, some even totally wiped out, while hundreds of dead washed up on shores after the storm surge, as rescue and relief workers continue attempts to reach many rural communities made inaccessible by the storm. The destruction of transport and communication lines have left broad swaths of Eastern Visayas and portions of Central and Western Visayas isolated from much needed aid. With food stocks, homes, key food production systems and sources of livelihood destroyed, millions of typhoon victims are in dire need of food, clean water, clothing, shelter, and medical services.

The crisis is even made worse by the socio-economic conditions in these underdeveloped provinces. Eastern Visayas, the region hardest hit by the super typhoon, ranks the third poorest region in the Philippines as of 2013 and posted the highest incidence of hunger according to 2011 government surveys. Aside from the vulnerable populations of peasants and fisherfolk who subsist in conditions of chronic poverty and underdevelopment, we also express concern for the many communities residing in mountain areas that have been susceptible to landslides and flashfloods because of unhampered large-scale mining and logging activities.

As a response to the urgent needs of the typhoon-stricken communities, IBON International calls on civil society groups, our global partners, networks and friends to raise the necessary funds and resources to be delivered to the most affected areas in the Visayas and parts of Luzon, as our contribution to the national and international effort to extend all forms of urgent aid for rescue, relief, and eventual rehabilitation in the said areas. We will ensure that the resources we raise will principally benefit the worst-hit sectors, especially the landless peasants, impoverished workers, fisherfolk and urban poor who are most vulnerable to post-disaster impacts. This emergency aid is expected to augment the efforts of our Philippine-based partners, including nationwide people’s organizations and citizens’ disaster response networks whose relief campaigns have now kicked into high gear.

You may send cash donations to:

We will also receive cash donations sent to the following IBON accounts: