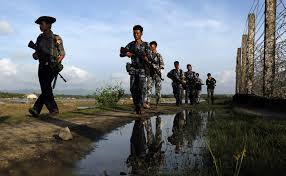 ASEAN Parliamentarians for Human Rights (APHR) today welcomed reports that the Myanmar military had halted its brutal counterinsurgency campaign in northern Rakhine State, but stressed that an independent inquiry is still needed to investigate alleged atrocities in the context of its operations.

JAKARTA, 18 February 2017 — ASEAN Parliamentarians for Human Rights (APHR) today welcomed reports that the Myanmar military had halted its brutal counterinsurgency campaign in northern Rakhine State, but stressed that an independent inquiry is still needed to investigate alleged atrocities in the context of its operations.

“Declaring an end to the crackdown does not absolve the Myanmar government of its responsibility to protect its people and ensure that they are not subjected to abuse. We’re talking about possible crimes against humanity here. This is not business as usual in ASEAN,” said APHR Chairperson Charles Santiago, a member of the Malaysian Parliament.

On 15 February, Myanmar’s newly-appointed National Security Advisor, Thaung Tun, announced that the Myanmar military had ended its to so-called “clearance operations” in northern Rakhine State, which were launched over four months ago in response to a 9 October attack on police outposts there.

“The regional and international pressure that led to this outcome must be sustained,” Santiago said. “Our job is not done. We must ensure that there is no impunity for rights violations. This task demands a credible, independent investigation—one which Myanmar authorities have thus far demonstrated they are unwilling or unable to carry out.”

A 3 February report by the UN Office of the High Commissioner for Human Rights (OHCHR) asserted a high likelihood that crimes against humanity and possibly ethnic cleansing were taking place in Rakhine State. Based on interviews with around 200 of the nearly 70,000 Rohingya refugees in Bangladesh, who fled their homes in Rakhine State since the start of the crackdown, the report documented devastating accounts of killing, torture, and sexual violence.

“The UN’s exhaustive first-hand reporting further corroborates the claims human rights organizations and independent media have been making for months: possible ethnic cleansing and crimes against humanity. These are serious, credible allegations, and the stakes are enormous. They further confirm the need for a thorough, independent investigation. And international assistance in this process is vital, as the Myanmar government has consistently demonstrated its inability to act alone,” Santiago said.

“The Myanmar government’s repeated denials of rights violations demonstrate that Naypyitaw has no interest in resolving the situation or addressing underlying issues. The fact that security forces have been tasked with investigating themselves and rooting out abusers in their own ranks speaks for itself. There isn’t even a half-hearted attempt at impartiality or independence.”

On 14 February, members of the Myanmar government’s Rakhine Investigation Commission, headed by Vice President and former army general Myint Swe, flatly rejected allegations by the United Nations of grave rights violations. These comments echoed previous statements and reports from the Commission, as well as from other government bodies. In recent days, the military and police have also set up separate teams to investigate allegations of human rights abuses by their own members.

APHR urged regional governments to assume a larger role in pressing Myanmar to address rights concerns. MPs also supported calls for further UN action, including the formation of a commission of inquiry, following the release of the 3 February report.

Parliamentarians called on ASEAN governments to support such an investigation and push for improvements in conditions for Rohingya, arguing that the Myanmar government’s actions in Rakhine State have a direct impact on other member states and the region as a whole.

“ASEAN governments need to work together to resolve this situation before it’s too late. That doesn’t mean playing the usual ASEAN game. It means stepping up and pushing for change,” Santiago said.

“It is disappointing to hear some ASEAN leaders lament the ‘internationalization’ of this issue. This is undeniably a regional issue—not an internal affair—and it demands a regional response.”