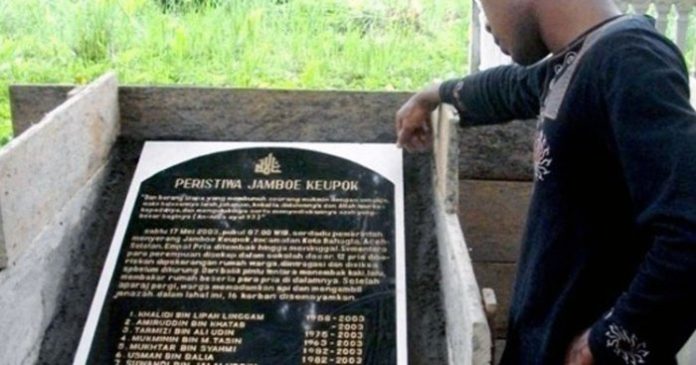 Indonesia is still failing tens of thousands affected by the devastating Aceh conflict, leaving family members and victims in the dark about the fate of loved ones and without justice, truth and full reparation, Amnesty International said ahead of the 10-year anniversary of the conflict’s end.

Indonesia is still failing tens of thousands affected by the devastating Aceh conflict, leaving family members and victims in the dark about the fate of loved ones and without justice, truth and full reparation, Amnesty International said ahead of the 10-year anniversary of the conflict’s end.

Saturday, 15 August 2015 marked a decade since the peace agreement that signalled the end of the Aceh conflict. But despite promises by successive Indonesian governments, victims are still left to fend for themselves while authorities show little interest in addressing past crimes.

“This has been a lost decade for far too many people affected by the Aceh conflict. Even if the violence has ended, Indonesian authorities have almost completely failed in their duty to provide truth, justice and full reparation to tens of thousands of victims and their family members,” said Josef Benedict, Amnesty International’s campaigns director for South East Asia.

“The 10-year anniversary of the conflict’s end must become the start of a genuine effort to address these issues. Indonesian authorities cannot continue to bury their heads in the sand and shirk responsibility – it is only prolonging the suffering in Aceh.”

Between 10,000 and 30,000 people, including many civilians, were killed during the decades-long Aceh conflict between Indonesian government forces and the pro-independence Free Aceh Movement (Gerakan Aceh Merdeka, GAM).

The peace agreement in 2005, monitored by the EU and Association of South East Asian Nations (Asean), included commitments to address crimes committed during the conflict. But in an open letter with seven other organisations today, Amnesty International outlines how the people of Aceh are still waiting for the government to make good on these promises.

Although there have been some important initiatives by the authorities and the National Human Rights Commission (Komnas HAM) to investigate human rights abuses committed, these have been piecemeal at best and failed to establish a comprehensive record of what happened, including the fate and whereabouts of those disappeared. Attempts to establish a truth commission on the national level have stalled due a lack of political will.

In December 2013, the Acehnese local parliament took the positive step of passing a by-law to establish a local Truth and Reconciliation Commission – but a year and a half later, no progress has been made in implementing it.

Justice for victims and their families

There is overwhelming evidence that many of the violations directed against civilians by Indonesian security forces and their auxiliaries may amount to crimes against humanity and that human rights violations and abuses committed by both sides of the conflict amount to war crimes. Despite this, only a handful of the crimes have been investigated, and no one has been prosecuted before independent civilian courts.

A flawed legal framework means few victims have access to the courts, while Indonesia’s Criminal Code does not recognise crimes under international law. The human rights courts that have existed since 2000 have a limited mandate, and all prosecutions before them – none of them for crimes committed in Aceh – have resulted in either acquittals or convictions that were overturned on appeal.

There have been efforts to compensate some victims, but these have not gone far enough and fall short of the comprehensive reparations programme that is needed. The Aceh Reintegration Agency, a government-sponsored compensation and reintegration programme, was not designed to address the harm suffered by victims of human rights abuses and did nothing to help the many women targeted by sexual violence during the conflict.

In a 2013 report, Time to face the past, Amnesty International highlighted the devastating consequences the current situation has for communities in Aceh.

“[We] want to know why until now the government has not acknowledged that we suffered human rights abuses,” an Aceh victims’ representative told Amnesty International. “We are still fighting, not against the government, but for the government to remember what happened to us. They do not have the right to forget.”

“There is no time to lose in facing up to what happened in Aceh. Authorities must acknowledge that serious human rights violations and abuses were committed during the conflict, and as a first step towards justice, truth and reparation establish immediately a truth commission in line with international standards,” said Josef Benedict.

“Today, family members still do not know what has happened to ‘disappeared’ loved ones and are struggling to get by, while those responsible walk free. The situation is breeding resentment that could sow the seeds of a future return to violence.”

Amnesty International also calls on EU and Asean states to take responsibility for their failures to ensure full implementation of the peace agreement.

The open letter is signed by Amnesty International, Asia Justice and Rights (Ajar), the Aceh NGO Coalition for Human Rights (Koalisi NGO HAM Aceh), the Commission for the Disappeared and Victims of Violence (KontraS), KontraS Aceh, the Indonesian Human Rights Monitor (Imparsial), the Institute for Policy Research and Advocacy (Elsam) and TAPOL.

A full copy of the open letter can be found here.