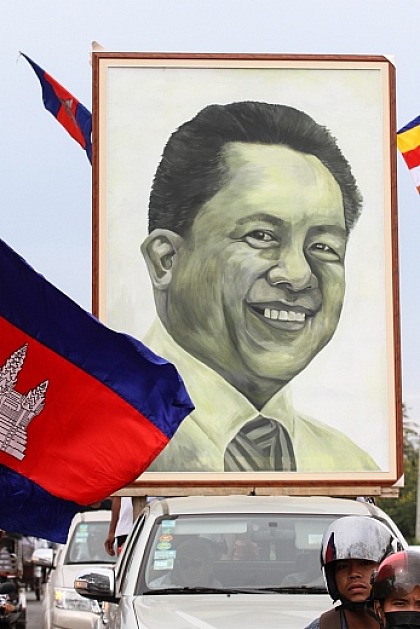 In light of serious shortcomings with regards to the responsibility of the court to critically examine the evidence before it, and in order to ensure conformity with international best practices, we, the undersigned, call for the establishment of an independent Commission of Inquiry to investigate Dr. Kem Ley’s death.

Despite compelling evidence that Oeuth Ang was the gunman who shot and killed Dr. Kem Ley, the lack of transparency in the investigation of Kem Ley’s death, the brevity of the trial proceedings, and the failure to fully investigate motive, potential accomplices and the circumstances of Oeuth Ang’s arrest, raise serious concerns about the adequacy of this criminal process. In light of the inadequacies in the investigation into Dr. Kem Ley’s death, as well as in the trial proceedings, we, the undersigned civil society organizations, call for the establishment of an independent Commission of Inquiry into the circumstances of his murder, in accordance with international best practices.

Dr. Kem Ley was shot dead on the morning of Sunday 10 July in a petrol station café in the middle of Phnom Penh, where he was known to often have morning coffee. Oeuth Ang was arrested shortly after the shooting, about two kilometers from the murder scene, and charged with premeditated murder on 12 July. Upon his initial arrest, he gave his name as ‘Chuob Samlab’, which translates in English as ‘Meet Kill’, and confessed to the murder. He claimed it was over an unpaid debt of $3,000 – an allegation that has been widely rejected by both Dr. Kem Ley’s family and Oeuth Ang’s wife. The Ministry of Interior also publicly stated in December through a spokesperson that it, too, did not believe this was plausible. Nevertheless, the investigation into Dr. Kem Ley’s murder drew to a close in less than six months after the killing with Oeuth Ang the sole suspect.

‘Lack of independent investigations feeds into the rampant impunity inherent in Cambodia’s justice system. It is unsurprising that this engenders continuing distrust in Cambodia’s institutions,’ said Chak Sopheap, Executive Director of the Cambodian Center for Human Rights (CCHR).

Throughout Oeuth Ang’s four-hour trial on 1 March, he falsely maintained that his name was Chuob Samlab, although the Court concluded that both were the same person. During testimony, he also reiterated his claim that he had shot Dr. Kem Ley over the unpaid debt. This motive was not challenged by the trial judges – who appeared satisfied to accept Oeuth Ang as the sole perpetrator – despite its total lack of plausibility and the questionable credibility of Ang’s testimony. Statements by Oeuth Ang’s family and friends in the months preceding the trial cast further doubt on this explanation. The judgment given today failed to make any references to the debt, despite Oeuth Ang’s repeated claim that this was the sole motivation for the killing.

The trial showed extracts of CCTV footage taken from the Caltex petrol station during and after the shooting, but not of the period immediately before it. Further footage that was shown at the trial showed Oeuth Ang running down a pavement on Mao Tse Tung boulevard after the shooting, followed by a motorbike carrying a man openly carrying a rifle. At one point in the footage, another large motorbike – carrying the insignia of the National Police – changes direction to follow Oeuth Ang as well. Oeuth Ang briefly jumps on this motorbike, before dismounting and continuing to run down the street. This bizarre behavior remains without credible explanation.

Oeuth Ang testified that he had met Dr. Kem Ley only once at a restaurant in Phnom Penh, arranged by an acquaintance from Thailand, who he named as ‘Pou Lis’, at which he gave Kem Ley $3,000. Oueth Ang also claimed that he had bought the gun used to shoot Dr. Kem Ley in Thailand from a Thai national called ‘Chak’. Neither man was called as a witness, although they are reported to be under investigation in relation to the case.

A series of witnesses, mostly from the police, read out brief witness statements. There was no comprehensive cross-examination.

‘A court is supposed to be inquisitive in order to uncover the truth. But the evidence showed, and the footage the prosecution chose not to show, left us with more questions than answers, which the court did not inquire into,’ said Moeun Tola, Director of the Center for Alliance of Labour and Human Rights (CENTRAL).

‘This investigation was inadequate and the trial was a charade. We demand an independent inquiry with international assistance to investigate Dr. Kem Ley’s death, which will be the only way to achieve justice for his family and friends,’ said Naly Pilorge, Deputy Director for Advocacy at the Cambodian League for the Promotion and Defense of Human Rights (LICADHO).

The obligation to carry out an effective investigation, as well as to ensure that all perpetrators are brought to justice, is a crucial element of the state’s obligation to respect the right to life, enshrined in Article 32 of the Constitution of the Kingdom of Cambodia, Article 3 of the Universal Declaration of Human Rights, and Article 6 of the International Covenant on Civil and Political Rights, to which Cambodia is a party. In light of serious shortcomings with regards to the responsibility of the court to critically examine the evidence before it, and in order to ensure conformity with international best practices, we, the undersigned, call for the establishment of an independent Commission of Inquiry to investigate Dr. Kem Ley’s death. This Commission should be comprised of international experts from outside Cambodia, and have access to all available evidence, including all available CCTV footage. Given the inadequacies in the original investigation and trial, as described above, an independent Commission of Inquiry is now the only means by which to safeguard the independence and transparency of the investigation, comply with Cambodia’s obligation to fully investigate possible breaches of the right to life, and ultimately to find justice for the family of Dr. Kem Ley.

This statement is endorsed by: