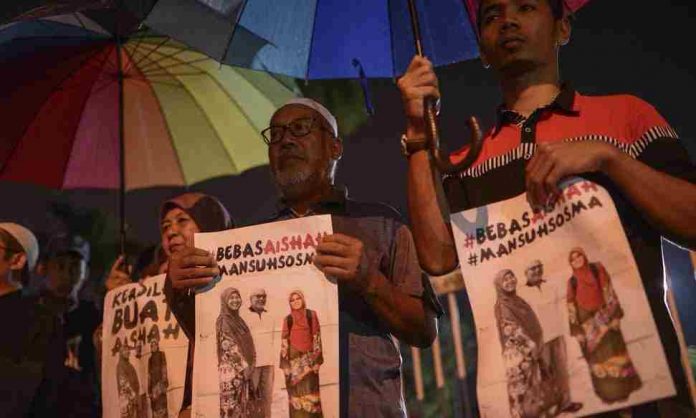 On 27 March 2017, SUARAM was notified that Siti Noor Aishah, the research student at University Malaya who was previously detained under the Security Offences (Special Measures) Act 2012 (SOSMA) for possession of 12 ‘illegal’ books.

On 27 March 2017, SUARAM was notified that Siti Noor Aishah, the research student at University Malaya who was previously detained under the Security Offences (Special Measures) Act 2012 (SOSMA) for possession of 12 ‘illegal’ books. After her release on 29th September 2016, she was re-arrested under Prevention of Crime Act 1959 (POCA). After her 60 days detention under POCA, Siti Noor Aishah has been sentence to house arrest with an electronic monitoring device (EMD) attached to her.

Despite the repeated failure by the police and the attorney general chamber in establishing a case against Siti Noor Aishah, the attorney general chamber appealed the High Court’s decision to discharge Siti Noor Aishah. Following her hearing at the Court of Appeal this morning, Siti was re-arrested and returned to detention under SOSMA pending the continuation of her trial at high court.

SUARAM strongly condemn the use of laws such as SOSMA that provides detention without trial. To date, Siti’s detention remain one of the most deplorable use of SOSMA and POCA. With no clear evidence against her, the repeated attempt to deprive Siti of her freedom through unscrupulous means can only be described as abuse of power and a gross human rights violations.

The fact that Siti Noor Aishah is already sentenced to house arrest with EMD under POCA and the finding by the High Court judge stands in her favour, it is abundantly clear that there is no need for her to continue her detention under SOSMA while her case proceeds to full trial. On this note, SUARAM calls on the Attorney General Chambers to rescind its stance on the matter and allow Siti to be released from SOSMA detention.