Home News With its $3.85b mine takeover, Indonesia inherits a $13b pollution problem 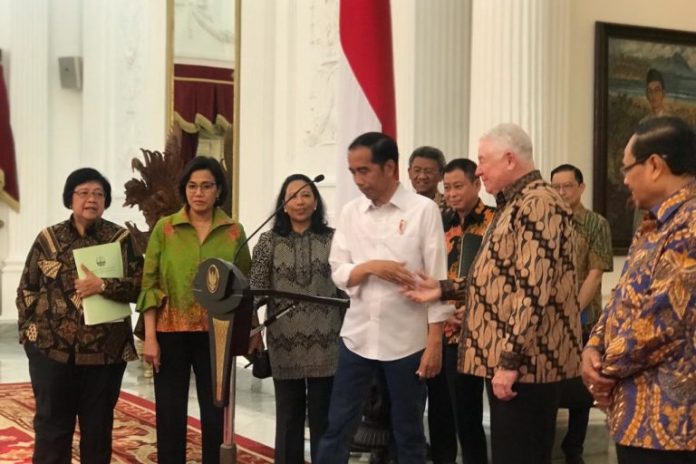 JAKARTA — When the Indonesian government took a controlling stake in the operator of one of the world’s richest gold mines at the end of 2018, proponents hailed the move as a historic step toward national and economic resource sovereignty.

The breathless media coverage of the transaction, which saw the government take a 51 percent stake in PT Freeport Indonesia (PTFI), previously majority-owned by Arizona-based Freeport-McMoRan, framed it as the “return” of a prized asset — the Grasberg gold and copper mine — to the Indonesian public after decades of foreign control.

But little was said about the long legacy of toxic pollution from the mine, or how exactly the new arrangement, at a cost of $3.85 billion to Indonesia, would finally bring real benefits to the indigenous people on whose land the mine sits, and who remain among the most impoverished communities in Indonesia.

Under the terms of the acquisition, a 41.2 percent stake in PTFI goes to state-owned smelting company PT Indonesia Asahan Aluminium, better known as Inalum. A 10 percent stake is held by the government of Papua province, where Grasberg is located. That latter stake, in turn, is managed 60:40 between an Inalum-controlled company and a province-owned firm. Freeport remains the operator of the mine.

But along with ownership in one of the most coveted mines on Earth, Inalum and the Papua government have also inherited a pollution problem stemming from the mining waste, or tailings, churned out by PTFI over decades.

“Does the completion of the divestment deal mean that the environmental problems can be resolved? No,” said Merah Johansyah Ismail, national coordinator of the Mining Advocacy Network (Jatam), an NGO. Following the takeover, he says, the national and provincial governments will also have to take the brunt of the fallout from the environmental damage caused by the mining operations.

That fallout could amount to some $13 billion — the estimated cost of environmental damages wrought by PTFI, according to a review by state auditors. Following a subsequent audit, which identified a wide range of irregularities in the company’s operations and contract, the government imposed sanctions on PTFI. The findings included indications of reckless mining and the disposal of mining waste into rivers, forests and the sea. 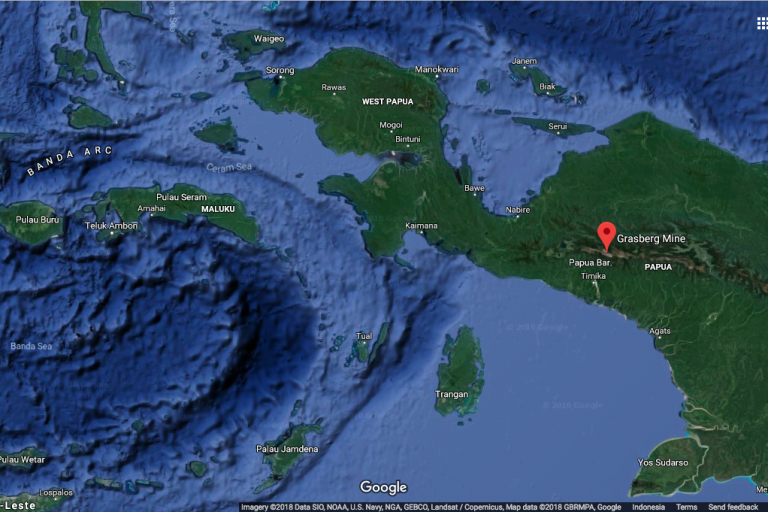 A screen grab showing the location of Freeport’s Grasberg Mine in Indonesia’s Papua province. Image by Google Maps.

In April 2018, the Ministry of Environment and Forestry followed up with a pair of decrees ordering PTFI to overhaul its waste management plan as a prerequisite for the divestment. They included slashing toxicity levels at dumping sites and producing a strategic environmental impact assessment, known as a KLHS.

PTFI has since complied, according to a top official, who said that, under the supervision of the environment ministry, the miner had drawn up a roadmap to manage its tailings disposal through 2030. PTFI produces 167 million metric tons of tailings a day and dumps it directly into the Aghawagon and Ajkwa rivers in Papua’s Mimika district, as permitted by local government decrees.

“What we’re pushing for is how to use this amount of tailings,” said Ilyas Rasyid, the environment ministry’s inspector general, in Jakarta on Jan. 9. “Based on field observations, it can be used as material to make roads, bridges, including district office buildings. Therefore we will do research on the use of tailings.”

The audit that spurred the sanctions and decrees over PTFI’s waste management practices also found that Freeport had used 45 square kilometers (17.5 square miles) of protected forest area without obtaining the proper permits, costing the government $20 million in lost fees between 2008 and 2015.

Ilyas said the environment ministry had issued a permit, known as an IPPKH, to PTFI on Dec. 20 for 38 square kilometers (14.7 square miles) of forested land for its waste management. But he said PTFI would still have to pay fines for the previous unpermitted operation.

Merah criticized this decision to simply fine the company as disappointing. Under Indonesia’s 1999 Forestry Act, mining operations in forest areas without an IPPKH permit constitute a criminal offense, with a maximum punishment of 10 years in prison.

“The resolution here is just a fine, yet there’s a clear criminal violation. Where’s the criminal punishment?” Merah said. “There are layers of criminal acts and they’re being allowed to be washed away by paying a fine.”

Henri Subagiyo, executive director of the Indonesian Center for Environmental Law (ICEL), a green advocacy group, also criticized the government, saying it had failed to include civil society representatives in its discussions about PTFI’s roadmap for the mining waste management.

“What exactly is the roadmap talking about? Does it comply with stringent environmental regulations? How exactly does the divestment deal mandate for environmental protection? The public deserves to know the answers to these questions because this is a public matter,” Henri said.

“What we had hoped for from this acquisition was not only economic benefits but also better protection for the people of Papua,” he added.

Maurits J. Rumbekwan, executive director of the Papuan chapter of the Indonesian Forum for the Environment (Walhi), said taking a majority stake in PTFI didn’t necessarily mean an end to the problems arising from the mine.

“Every day [PTFI] postpones rehabilitating the damaged environment, while every second the waste that enters the river poses a threat [to communities],” Maurits said. 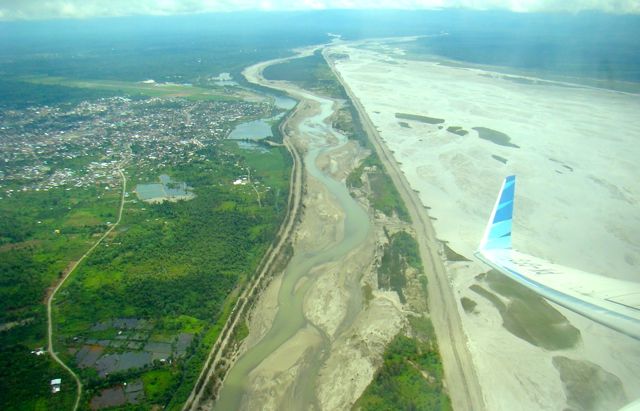 A river in which PT Freeport Indonesia dumps some of the mining waste from its Grasberg site in Papua. Image courtesy of Yoga Pribadi/Mongabay Indonesia.

Ahmad Redi, an expert in natural resources law at the University of Tarumanegara in Jakarta, said PT Inalum would be left legally and financially responsible for the environmental damage caused by PTFI’s previous activities. He said the government would have gotten a more beneficial deal had Freeport’s work permit been allowed to expire in 2021, including not paying as much for the controlling stake in PTFI, and getting a more advantageous tax arrangement after 2021.

“The direct and indirect economic benefits would then be for the people and economy of Papua,” Ahmad said.

In the decades since the first shipment of copper left Grasberg in 1972, the wealth of the mine has barely trickled down to the local communities, activists say. Papua remains one of the least developed and most impoverished provinces in Indonesia, with high rates of illiteracy and infant and maternal mortality. Instead of an economic boom, the people have been mired in conflict with the mine operator and security forces.

The region’s indigenous Amungme and Kamoro communities traditionally subsisted on sustainable agriculture, fishing and hunting until the opening of the mine in 1967. They were stripped of their rights to 1,000 square kilometers (386 square miles) of their ancestral land, and over the following decades have been further displaced and marginalized by migrants from elsewhere in Indonesia drawn to the mining boomtown.

The National Commission on Human Rights (Komnas HAM), a state-funded body, said in March 2017 that PTFI had never compensated the indigenous people as the original stewards of the land where it operates, characterizing Freeport’s concession as a land grab.

Fred Boray, head of Papua Province’s mining agency, said in July the proceeds from the 10 percent stake granted to the local government after the takeover would benefit both the provincial administration and traditional landowners, though he did not clarify how such funds would be divided. PTFI has also previously committed to dedicating 1 percent of its annual revenue to community development projects.

Those schemes, however, are seen by many as inadequate to compensate the huge social and ecological losses communities have borne in the past decades.

“The divestment deal cannot be seen as an effort to improve the welfare of the indigenous communities there — to think otherwise is silly,” Maurits said.

“People shouldn’t have to depend on funds given by the company,” Maurits added. Instead, he said, the company should clean up the mess it left behind so that local people can once again rely on the environment to meet their needs.

In August, a coalition of Papuan activists called FMPPF staged a protest calling on PTFI and the Indonesian government to make community rights and welfare a central part of the takeover deal. Their demands included more participation of indigenous people in the mine’s operations, recognition of traditional land rights in the company’s concession area, and more involvement by indigenous communities in drafting the company’s policies.

“The company and the national and provincial governments must not forget that the mine isn’t an independent entity,” Maurits said. “There were communities that lived safely there before the company arrived.” 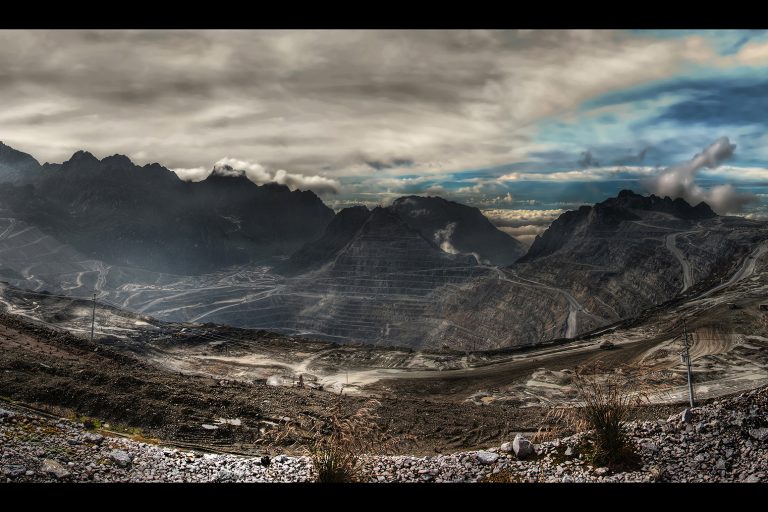 Panoramic view of the Grasberg gold and copper mine in Indonesian Papua on the island of New Guinea. Image by Richard Jones/Flickr.

SOURCE With its $3.85b mine takeover, Indonesia inherits a $13b pollution problem