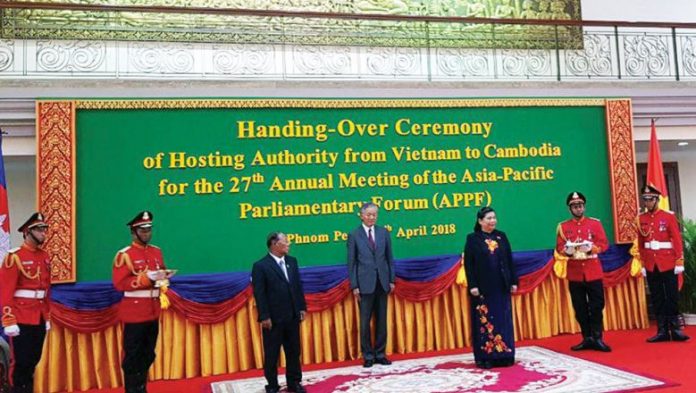 The Handing-Over Ceremony of Hosting Authority from Vietnam to Cambodia for the 27th Annual Meeting of the Asia-Pacific Parliamentary Forum took place on April 25, 2018. BAYON RADIO VIA FACEBOOK

The 27th Annual Meeting of the Asia-Pacific Parliamentary Forum (APPF) officially begins on Tuesday in Siem Reap and will focus on issues on the Korean peninsula, territorial disputes in the South China Sea and human rights in Myanmar.

Chheang Vun, the chairman of the National Assembly’s Commission on Foreign Affairs, International Cooperation, Information and Media said on Monday that the APFF, which is presided over by National Assembly president Heng Samrin, will also push attendees to empower female lawmakers.

“We will discuss and exchange opinions on big issues. The APPF has not focused on this area before and now, in Cambodia, [it will].”

“We are proud because we have done diplomatic work to push legislators to pay attention to female lawmakers,” said Vun, who is also deputy director of the forum’s permanent commission.

The National Assembly and the government know the important role women play in politics, he said.

“The role of women in politics is vital, so we are trying to promote it. If women have enhanced roles, the political situation in every country will be stronger.”

“We are also going to discuss international security and this area is crucial because the modern world faces many challenges . . . We have two or three points to resolve, such as the maritime dispute between some Asean countries and China, and we must discuss the conflict on the Korean Peninsula.”

“Human rights in Myanmar [will also be covered]. These are the topics that we are going to discuss,” he said.

Therefore the APPF will encourage the disputing parties to solve the conflict peacefully.

Vun said that in terms of the Korean Peninsula conflict, Asean takes the same position as the UN, and Cambodia asks North Korea and the US to come to the negotiating table more often in order to find positive solutions.

The Inaugural Meeting of the APPF was held in Tokyo, Japan, in January 1993. The meeting formally adopted the Tokyo Declaration that officially established the APPF as an inter-parliamentary organisation, initially comprising 15 founding members.

Cambodia became a full member in 1995. The forum currently has 27 member states. The meeting will conclude on Thursday.