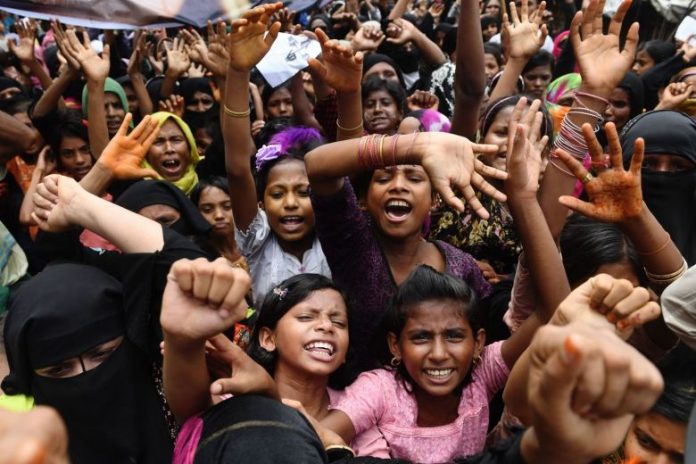 Rohingya refugees attending a ceremony to remember the first anniversary of a military crackdown that prompted a massive exodus of people from Myanmar to Bangladesh, at the Kutupalong refugee camp in Ukhia, on Aug 25, 2018.

YANGON • Myanmar yesterday rejected a United Nations investigation that called for top generals to be prosecuted for alleged genocide against the Rohingya minority, as the US and other countries joined growing calls for them to face justice.

“We didn’t allow the FFM (the UN Fact-Finding Mission) to enter into Myanmar, that is why we don’t agree and accept any resolutions made by the Human Rights Council,” said government spokesman Zaw Htay, according to a report yesterday in state-run The Global New Light of Myanmar newspaper.

He pointed to the formation of Myanmar’s own Independent Commission of Inquiry, which he said was set up to respond to “false allegations made by the UN agencies and other international communities”.

On Monday, the UN probe detailed evidence of genocide and crimes against humanity “perpetrated on a massive scale” against the Rohingya, including acts of rape, sexual violence and mass killings.

At a UN Security Council session a day later, several countries – including the United States, Britain, France and Sweden – called for Myanmar’s military leaders to be held accountable.

Myanmar has denied most of the allegations, saying that the military responded to a legitimate threat from Rohingya militants, who attacked police posts across western Rakhine state.

The country has “zero tolerance for human rights violations”, Mr Zaw Htay said, but he added that strong evidence, including records and dates of any alleged abuses, must be provided before investigations are undertaken.

Mr Zaw Htay also lashed out at Facebook for shutting down the pages of Myanmar’s army chief and other top military brass on Monday, saying that the move could hamper the government’s efforts at national reconciliation.

The drumbeat of calls for accountability is getting louder, with UN investigators calling on the Security Council to refer the Myanmar crisis to the International Criminal Court or to create an ad hoc tribunal.

Several Security Council members threw their support behind the idea, while also calling for a mechanism to “collect and preserve proof” of abuses.

However, the ambassadors from Russia and China offered no criticism of the Myanmar authorities and all but called on other countries to back off. The crisis, they said, should be solved by Myanmar and its neighbour Bangladesh, where most of the nearly 725,000 Rohingya refugees fled to after the violence.

In addition to the report issued by the UN, the US State Department will soon release the findings of a survey of 1,024 Rohingya refugees that Ms Nikki Haley, the US Ambassador to the UN, called “stomach churning”.

Indonesian MP Eva Kusuma Sundari, a member of the Asean Parliamentarians for Human Rights, said: “Global pressure on Myanmar to respond (to the United Nations probe) is growing, and Asean must be a central part of that.”

Meanwhile, the Nobel Peace Prize awarded to Ms Aung San Suu Kyi will not be withdrawn despite the UN report, the Norwegian Nobel Committee said yesterday.

Ms Suu Kyi, who leads the Myanmar government and won the Nobel Peace Prize in 1991 for campaigning for democracy, has been criticised for failing to speak out against the army crackdown.

“Aung San Suu Kyi won the Nobel Peace Prize for her fight for democracy and freedom up until 1991, the year she was awarded the prize,” said Mr Olav Njoelstad, secretary of the Norwegian Nobel Committee. Rules regulating the Nobel Prize do not allow for the award to be withdrawn, he added.