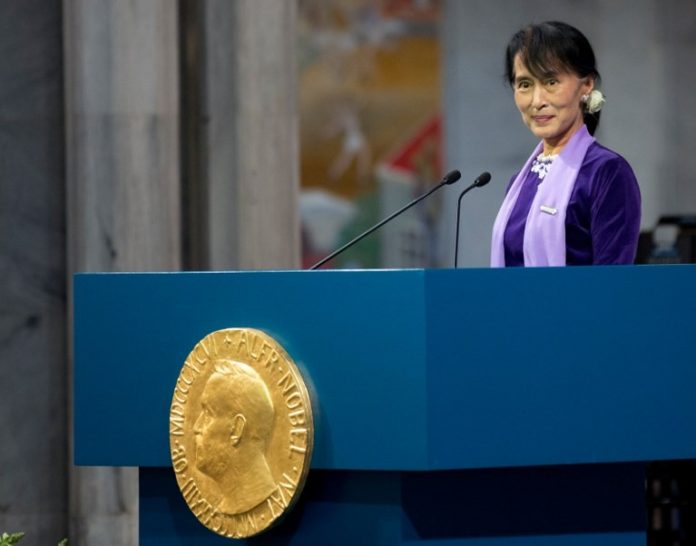 How will history judge 1991 Nobel Peace Prize winner and Myanmar’s de-facto leader Aung San Suu Kyi? How does the once global icon of human rights and democracy wish to be remembered by the world? And will the Rohingya Muslims and other oppressed minorities in Myanmar forgive the daughter of the nation’s independence hero Aung San for her silence on the sufferings of millions of people in her own country?

Unless she eventually finds the political courage  and goodwill to stand up against the military’s decades-long rampant and systemic persecution of her people, she will likely be remembered as “one of the most responsible persons for the gross human rights abuses” inside Myanmar, a member of ASEAN.

Unfortunately, there is little hope that she will practice what she committed to do in her Nobel Lecture in Oslo, on June 16, 2012. During her 15-year house arrest she said she had gained strength from the preamble to the Universal Declaration of Human Rights, which reads “disregard and contempt for human rights have resulted in barbarous acts, which have outraged the conscience of mankind, and the advent of a world in which human beings shall enjoy freedom of speech and belief and freedom from fear and want has been proclaimed as the highest aspirations of the common people”.

On Monday, a United Nations-backed fact-finding mission into violations of human rights in its report urged the world body to investigate and prosecute Myanmar’s top generals, including Senior General Min Aung Hlaing, the commander-in-chief, for genocide.

It also concluded that state counselor Aung San Suu Kyi had failed to use her “moral authority” to prevent violence against the Rohingya minority in Rakhine state. The report was released one year after the military  forced at least 700,000 Rohingya people to leave their native land.

Indonesia has actively participated in convincing Myanmar’s generals in the past to  hand over power to civilians.  The country is now enjoying the fruits of political reform in terms of economic growth. But Myanmar could become a pariah state again, if its leaders continue to defy  the international outcry against the ongoing attrocities.

Suu Kyi still has a chance to leave a huge legacy for the next generations if she has the willingness to uphold justice for the victims of the human rights abuses in her country.

A single individual would indeed face huge challenges against the apparently still entrenched junta. Therefore ASEAN also must show what it means by its “centrality” regarding Myanmar. Is it the centrality of national leaders or their people? Following informal approaches by Myanmar’s neighbors, especially Indonesia, to alleviate the Rohingyas’ suffering, ASEAN now has the backing of the UN, whose report recommended that organizations like ASEAN “develop strategies to ensure accountability” for perpetrators of crimes against humanity and war crimes.