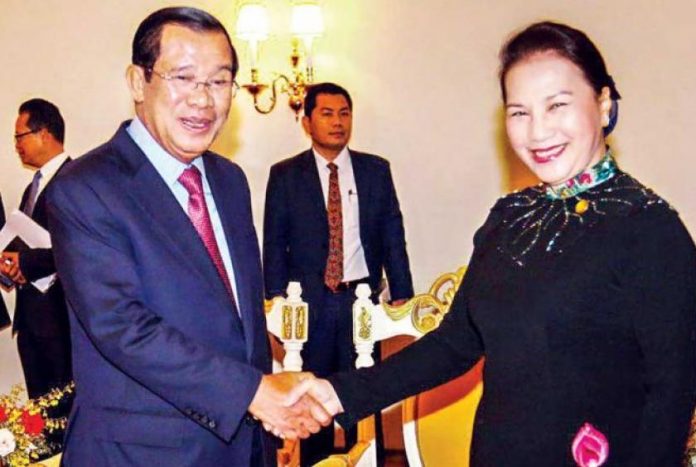 Phnom Penh (Phnom Penh Post) – Three of Cambodia’s top leaders used the Annual Meeting of the Asia-Pacific Parliamentary Forum (APPF) to warn that small- and medium-sized countries were facing geopolitical challenges due to the machinations of powerful states.

This included trade disputes which could affect the economic progress of developing nations.

The Korean peninsula issue, the South China Sea dispute and human rights violations in Myanmar were also of particular concern.

The statements were made at the APPF meeting in Siem Reap province on Tuesday, at which 300 delegates from 21 countries took part under the theme Promoting Parliamentary Partnership for Peace, Security and Sustainable Development.

“The world is facing growing regional tensions and geopolitical challenges, which may prove to be a dangerous game for small and medium countries which can suffer from the decisions of the big powers’ geopolitics,” Samrin said.

He said the world was facing instability, with the threat to peace greater than in previous decades and taking many forms.

Cambodia and other nations were deeply concerned by the tensions between world powers, he said, especially the US-China trade dispute, which could affect developing countries.

“A trade conflict is happening, and it could become a trade war if it keeps escalating. If protectionist policies continue, multilateral relations will be replaced by bilateral ones.

“This would seriously influence developing countries as the consequences of such a trade war would badly affect the world’s production chain,” Samrin said.

He said the Asia-Pacific Parliamentary Forum showed the will to build the Asia-Pacific region harmoniously, with mutual respect and peaceful solutions to problems based on international law and sustainable development.

To achieve such goals, he said, the countries of Asia-Pacific must cooperate closely and implement the agreements made between them.

Samrin said Cambodia was enjoying complete peace, strong political stability and unprecedented growth. He said such peace and unity was down to the “Win-Win” policy and other efforts of Prime Minister Hun Sen.

The prime minister said the Asia-Pacific region and beyond faced the issues Samrin outlined and further threats, such as natural disasters, food insecurity and poverty, which threatened the peace and sustainable development of the world.

Hun Sen offered recommendations for consideration at the annual meeting. He asked Asia-Pacific parliaments to jointly pay attention to the obligations of the UN, Asean, civil society and private sectors, especially in regards to the goals of sustainable development and the promotion of the rights and dignity of people as stated in the Constitution and UN Conventions.

“[We] need to solve existing disputes via peaceful negotiations based on international law or win-win policies in which both sides win and can accept the solution together for peace,” he said.

Senate president Say Chhum said: “We have all attentively observed and are worried about the complex changes in the region and the world that have brought irregularities and new challenges, especially the emergence of unilateral protectionist policies, new arms races and trade wars.”

Kin Phea, the director-general of the International Relations Institute of Cambodia at the Royal Academy of Cambodia, said that generally, powerful countries like the US, China, Russia, France or UK have their own political agendas and are only concerned with their own interests, regardless of the consequences to other nations.

“The world order generally has been determined by the superpowers . . . they steer the world. As we can see, chaos in the world has never been created by small countries, only the big ones.

He added that what the three top Cambodian leaders said was correct and that the Kingdom needed to remain neutral in foreign policy and shouldn’t take the side of any nation.

Instead, it had to focus on improving its economy and becoming less reliant on foreign aid. All foreign aid, he said, whether from the East or West, came as part of an agenda.

“We also need national unity to be able to weather the coming storms. National unity will only come from the equal competition of ideas. We need to stop treating each other as enemies and respect the political and civil rights of everyone.

“We need the rule of law and reduced corruption to ensure Cambodia becomes more competitive. We need to start focusing on our soft power and be seen as a good nation that’s completely neutral,” he said.

Political analyst Lao Mong Hay said Samrin should know as well as anyone how geopolitics between the big powers can affect smaller nations, with Cambodia engulfed in war for decades.

He said Samrin should remember that the 1991 Paris Peace Accords that ended the war in the Kingdom included international guarantees to shield Cambodia from such geopolitics in the future.

“Now that such dangers are looming, as he sees it, he should revive the Accords and get all state parties to them to sincerely honour their obligations under them, namely, their undertaking ‘to recognize and respect in every way the sovereignty, independence, territorial integrity and inviolability, neutrality and national unity of Cambodia’,” he said.