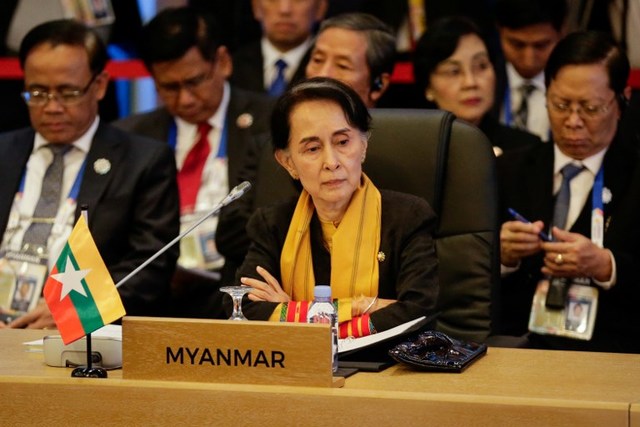 Once hailed as a global rights champion, Suu Kyi has fallen from grace due to her failure to speak up following a brutal military crackdown on Myanmar’s Rohingya minority

TOKYO, Japan – Embattled leader Aung San Suu Kyi vowed Monday, October 8, to increase transparency over her government’s handling of the Rohingya crisis while pitching for foreign investment in Myanmar ahead of a regional summit in Tokyo.

Suu Kyi, once garlanded as a global rights champion, has seen a sharp fall from grace due to her failure to speak up following a brutal military crackdown on Myanmar’s Rohingya minority.

“I’m ready to acknowledge that we have challenges to face particularly with regard to the Rakhine and with the struggles we have on the peace front,” Suu Kyi said in a speech before Japanese businessmen, referring to Myanmar’s westernmost state where the minority dwelled.

“We are not hiding this fact from our friends,” she said.

In the speech ahead of the summit in Tokyo, Suu Kyi said she was aware that peace and stability in her country were necessary for attracting foreign investment.

“We understand that peace, reconciliation, harmony, stability, rule of law, human rights – all these have to be taken into consideration when we are looking for more investment, for greater economic opportunities,” she said.

“We wish to be very open and transparent to our friends,” she said. “If you have concerns, if you have worries, please discuss this openly with us.”

A brutal military campaign that started last year drove more than 700,000 Rohingya Muslims from Myanmar into neighboring Bangladesh, where they now live in cramped refugee camps – fearful of returning despite a repatriation deal.

Suu Kyi’s supporters say her hands are tied by a still powerful military, which controls a quarter of parliament’s seats and three ministries.

On Tuesday, October 9, she is to hold a meeting with Japanese Prime Minister Shinzo Abe, who chairs the regional summit drawing Southeast Asian leaders. – Rappler.com