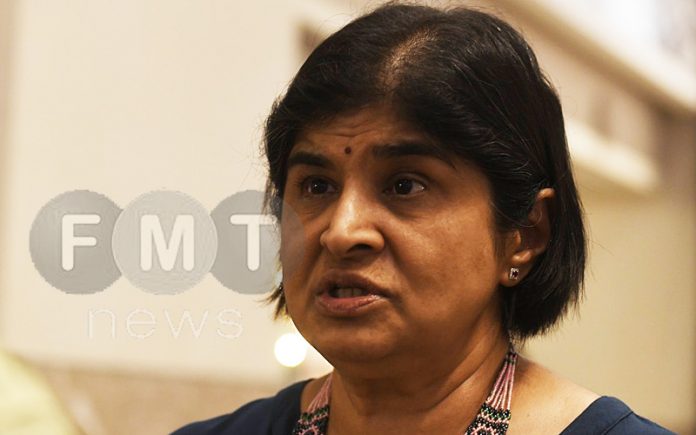 PETALING JAYA: National Human Rights Society (Hakam) president Ambiga Sreenevasan has condemned Minister in the Prime Minister’s Department Mujahid Yusof Rawa over his remarks that any advocacy for the rights of the lesbian, gay, bisexual and transgender (LGBT) community is “extreme” and should be curbed.

“Enough of beating up on a marginalised community. Does it make you feel strong and powerful? Do you know you endanger their lives and safety every time you attack them?” Ambiga said in a tweet today, citing a Malay Mail report which quoted the minister in charge of religious affairs.

During a round table with religious scholars and academics at the International Institute of Advanced Islamic Studies today, Mujahid reportedly said that the LGBT community must not be allowed to revamp the existing narrative in the country, pointing out that even the prime minister had explained he would not entertain ideals which were against the norm.

“We can’t let these people dictate Malaysia, ladies and gentlemen. You cannot let them dictate you. The country would be in disaster if these extreme ideas dictate you.

“While you have the authority to say the right thing, and be brave to say (it), then I believe this country can move forward,” Malay Mail quoted Mujahid as saying.

Ambiga, who is the former Bar Council president, told FMT the new government had to do better on tackling issues involving marginalised groups.

She said the delay in coming up with better reforms to help them would be problematic in the long run.

“The new government is trying to be different than the old one when dealing with these sensitive issues, and to be fair, they’re not too bad, but they have to do better, I think.

“I hope the new government looks into this seriously. For me, we have failed the people by not being more inclusive, and so we have to look at the issues surrounding marginalised groups to see how we help them,” she said.

Ambiga said this included not just LGBTs but the disabled community, special needs children and so on.

“The new Malaysia must be about taking care of every single person in the country. Maybe it’s just me being impatient about reforms that are not taking off, but I want this to be done first.”

Mujahid was similarly embroiled in an LGBT-related controversy in August after portraits of prominent transgender activist Nisha Ayub and gay rights advocate Pang Khee Teik were removed from a public photography exhibition in Penang.

He had defended the move and said it was out of concern for the two activists who would be needlessly discriminated against as they were in the public eye.

Ambiga had previously also voiced concern over the resignation of Numan Afifi, an openly gay individual, as a special officer to Youth and Sports Minister Syed Saddiq Syed Abdul Rahman.

Numan was criticised for his activism and ties with the LGBT community.
Klang MP Charles Santiago.

Meanwhile, DAP’s Klang MP and vocal human rights supporter Charles Santiago told FMT that the country had been divided for too long on the matter of LGBT issues.

He questioned the lack of compassion when it comes to accepting and understanding the group.

“All religions talk about compassion so instead of focusing on our differences, it is time we move forward and stop politicising the issue because that’s exactly where the problem lies in our current political climate,” Santiago, who is the chairman of the Asean Parliamentarians for Human Rights, said.

“I don’t think the LGBT community here is asking for same-sex marriage, they haven’t come to that level yet. All they’re saying is, ‘Don’t disturb us. Give us the space we want and recognise us as who we are. Respect our identity,’ and what’s wrong with that?

“I haven’t seen the local LGBT group, and I may be wrong, asking for property rights or so on.”

Among others, he said this was because our concept of family has not changed.