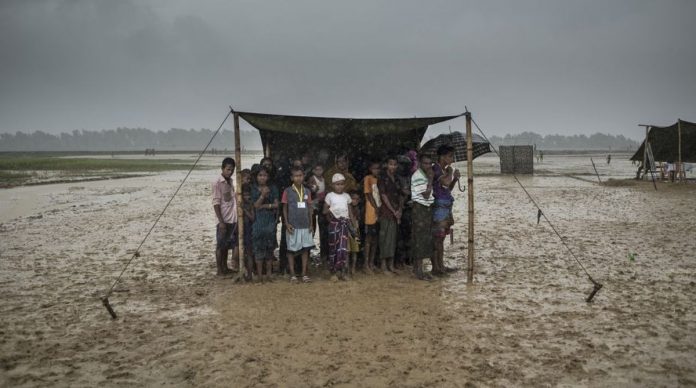 A file photo of Rohingya refugees taking shelter from rain at the Nayapara refugee camp in Bangladesh’s Ukhia district in October 2017. (Photo: AFP)

At the end of the 33rd Asean summit in Singapore on November 15, Singapore formally handed over the symbolic gavel of Asean chairmanship to Thailand, which it last held in 2009. The one-year rotating term will officially begin on 1 January 2019.

As the incoming chair, Thailand hinted what the regional group should or could do when Prime Minister Prayut Chan-o-cha told his Asean colleagues that the regional bloc is capable of playing an important role in addressing the situation in Rakhine state in a constructive, tangible and sustainable manner.

Prayut suggested the enhancement of the Asean Coordinating Centre for Humanitarian Assistance on Disaster Management to provide humanitarian assistance to the affected people, as well as support the repatriation of Rohingya refugees and to ensure the improvement of quality of life for all communities in Rakhine state.

As the Rohingya crisis has become a regional or international issue, Myanmar needs to open up its doors for Asean to collectively help address the problem. The engagement of Asean member states should not be seen as an interference in the internal affairs of a member state. Rather it should be viewed as fellow Asean members trying to strengthen the internationalization of the issue, which in many ways is Myanmar’s own initiative.

For example, in August 2016, the Myanmar government formed a nine-member state advisory commission on Rakhine, chaired by former UN Secretary-General Kofi Annan. Among others, the commission recommended citizenship verification, rights and equality, and documentation, and talked about the situation of the internally displaced and freedom of movement as well as a ministerial-level appointment to coordinate the effective implementation of the commission’s recommendations.

And in May 2018, Myanmar invited the UN Security Council members to visit the conflict-ridden areas of Rakhine state. The council members, among others, urged the Myanmar government to conduct a transparent investigation into alleged human rights abuses in northern Rakhine or face the potential of military officials being referred to the International Criminal Court, and to speed up the repatriation of hundreds of thousands of Rohingya refugees from Bangladesh with the help of UN agencies.

The international community’s pressure was largely responsible for the signing of a tripartite agreement on June 6 between Myanmar and two UN agencies – United Nations High Commissioner for Refugees (UNHCR) and United Nations Development Program (UNDP) – which would help with the voluntary return and reintegration of displaced refugees, assess conditions in Rakhine state for those who are considering returns, and support programs that benefit all communities in Rakhine state.

Since it has already engaged the UN agencies and international experts, Myanmar should welcome Asean’s goodwill gesture to help address the protracted Rohingya problem. An attempt to oppose the Asean’s desire to engage will only hamper the cohesion and strength of the organization, and invites criticism from the international community.

Many in Myanmar, including the military leadership, are more likely to be receptive and comfortable working with fellow Asean partners than the intervention of Western governments. Moreover, historically and culturally, Myanmar has largely been on good terms with the incoming Asean chair.

Asean should attempt to address the Rohingya conundrum in a mutually acceptable manner by involving the Rohingya community, the government of Bangladesh, as well as the UN agencies with which Myanmar had signed MoU – UNHCR and UNDP.

Besides leaders’ summits, Asean should also explore other platforms such as the Asean Defense Ministers’ Meeting (ADMM) and the ADMMPlus for possible ways to cooperate with the Myanmar military, which not only controls the security matters of the country but also retains significant political power.

The longer the Rohingya crisis is kept unaddressed, the issue can become a breeding ground for radicalisation, which could be exploited and manipulated by Islamic terrorists. The role of ADMM and ADMM-Plus are particularly important for addressing such potential threats and for strengthening security and defense cooperation for peace, stability, and development of the region.

It is true that the Asean grouping has not taken any substantive measures on the Rohingya issue in the past, but given the recent developments within the organization, we can only hope for a more active and engaging role for Asean.

But the fructification of such engagement will largely depend on the openness and receptiveness of Myanmar, as well as the level of commitment from Asean member states, particularly the incoming chair of the group.

While there may be some concerns about the infringement of Myanmar’s national security and sovereignty, it may now be too late for the country to oppose the presence or involvement of international community. There is even a possibility that the absence of relevant international organizations may be counterproductive.

Moreover, in light of a number of unsuccessful initiatives of the Myanmar government since the quasi-civilian administration of President Thein Sein in 2012, the participation of Asean may help bring some new thinking and fresh ideas, which may pave the way for a possible solution to the protracted problem.

The writer is Associate Professor and Executive Director of the Center for Southeast Asian Studies, Jindal School of International Affairs, O.P. Jindal Global University. He is the author of three books on Myanmar, including Democratization of Myanmar