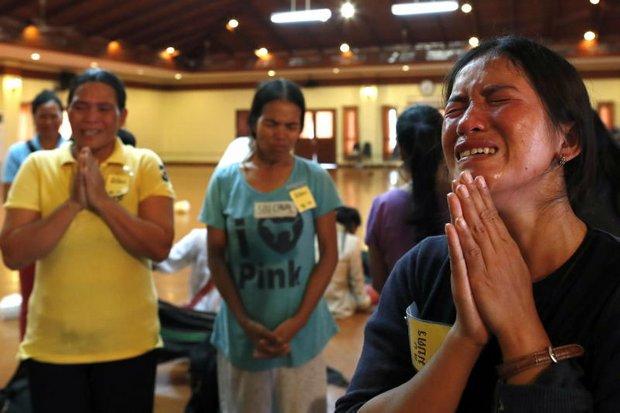 Montagnard women from Vietnam break into tears after Thai police took away their children for separate detention after about 180 Montagnards from Vietnam and Cambodia were arrested and held for possible deportation back to their countries. (EPA photo)

Human rights activists are calling for the release of over 160 ethnic minority Montagnards from Cambodia and Vietnam arrested by joint force authorities in Nonthaburi’s Bang Yai district on Tuesday. Theactivists say most of them are either refugees or asylum seekers and sending them back to their home countries would put them in danger.

The raid and arrests took place at a rented house in Soi Wat Sao Thong Hin after a complaint was made to a government Damrongdhama Centre over fears they were illegal migrant workers.

Various agencies have given different figures for the number arrested. Bang Yai district chief Chun Natthadat Kungsukul, who led the raid by a military, police and Interior Ministry officials, was notavailable for comment Thursday.

Puttanee Kangkun, of the non-profit group Fortify Rights, said a total of 38 Cambodians among the group including 12 children have been sent to the Immigration Detention Centre (IDC) in Bangkok’s Soi SuanPhlu to await deportation according to the immigration agreement between Thailand and Cambodia and Laos.

The remainder — about 130 — are Vietnamese and a court will decide where they will end up, she said.

“If they are fined for illegal entry or overstaying, they are unlikely to be able to pay the fine and will likely to go to jail instead. Afterwards they will also have to go to the IDC and wait to be deported. But they cannot all be deported as most of them have the status of either refugees or asylum seekers,” Ms Puttanee said.

About 20 of the group do not have refugee or asylum seeker status but are in the process of seeking it, she said.

Ministry of Foreign Affairs spokeswoman Busadee Santipitaks said the ministry was checking up on the situation.

“Those detained come mostly from the Montagnard population in Vietnam and Cambodia and were arrested on Aug 28, 2018, on the outskirts of Bangkok,” it said.

“Thailand’s frequent claims about improving refugee rights ring hollow when officials detain dozens of families who are protected under the mandate of the UN refugee agency,” it added.

“These Montagnards face harsh persecution if they are returned to Cambodia and Vietnam, which Thailand should not do under any circumstances,” said Brad Adams, Asia director.