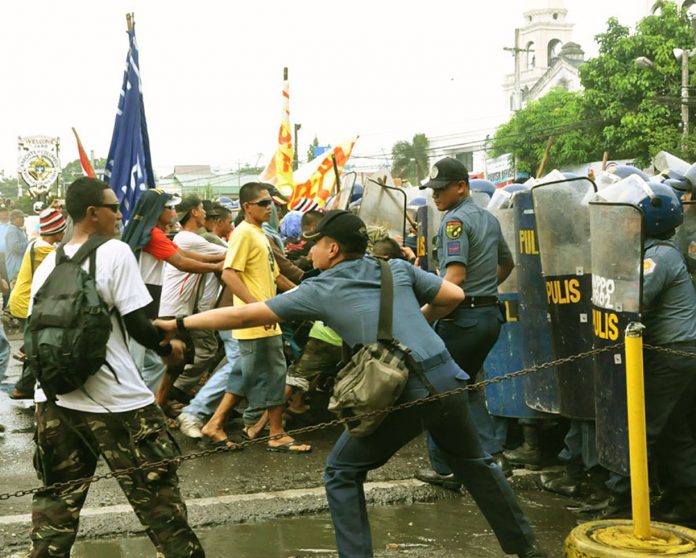 On October 4, 2015, 2:30 p.m., BPMP farmer members were conducting a rally on the occasion of the Asia-Economic Corporation (APEC) meeting at the Iloilo Convention Center, Iloilo City when they were violently dispersed by members of the Philippine National Police (PNP) led by PSupt. Adrian Acollador, Public Order Task Unit Commander.

On the day of the incident, farmers from the whole district of Iloilo City and Capiz arrived at the assembly point in Barangay Ungka, Jaro, Iloilo City at around 9:00 a.m.

According to Aurora Cutanda, Alab Katipunan Council and BPMP treasurer, 5,000 members were expected to participate in the rally but only about 3,000 members arrived because six (6) vehicles from the 1st district of Iloilo were blocked at the PNP checkpoint and were not allowed to pass.

Cutanda narrated that fifteen (15) vehicles from the 3rd district were also blocked at the PNP check point in Barangay Kabatuan, Iloilo City. The men were instructed to step down from the vehicle for inspection. They were allowed to pass and proceed to Ungka, Jaro, Iloilo after their lawyer, Atty. Rene Sarabia who was with them negotiated with the PNP personnel.

At around 1:00 p.m., the farmer members and supporters started to march toward the Iloilo Convention Center (ICC).  After about one kilometer, when they reached Barangay Sambag, 300 PNP members with anti-riot shields and truncheons blocked their way. They were forced to take another route leading to Jaro Plaza only to be confronted again with the barricade of PNP personnel and their mobile patrol vehicles.

According to BPMP Chairperson and Alab Katipunan Panay Coordinator Joel Gepaya, they turned along El 98 street going to Jaro Cathedral in front of SM City Jaro and stopped to wait for the rest of delegation.

According to Gepaya, he was being interviewed by members of the media when he saw approximately 1,000 anti-riot police who started shoving their shields against the marchers. The protesters continued to push against the PNP members’ shields, truncheons, helmets, and body armors. Later, the police started to hit them with truncheons.

Gepaya ran toward the group but he was blocked by six unidentified PNP men including PSupt. Adrian Acollador. Immediately, he was handcuffed and arrested and brought to Jaro Police Station 3.

Cutanda narrated that some of the PNP personnel were hurt in the commotion, but there were more protesters who sustained injuries including ten (10) of their members who suffered cuts on their heads were brought for medical checkup.

After the commotion and Gepaya’s arrest, the marchers proceeded to Jaro Plaza and continued their program while they were surrounded by anti-riot police and military men. Their tanks and fire trucks were also on standby while the program was ongoing.

At around 6:00 p.m., after some negotiations, the protesters left the plaza.

According to Gepaya, the state repression takes the form of virtual police and military control of Iloilo City. The local government denies concerned groups from exercising their freedom of expression through peaceful assembly by denying the issuance of rally permits.

On September 27, 2015, PNP/ICPO called Gepaya and informed him that their office has approved the permit but still had to be approved by the Mayor. When they followed up the request at the Mayor’s office, they were informed that their request for permit was denied. But because of the clearance from the PNP, the group proceeded with their mobilization.

On October 5, 2015 at around 9:00 a.m., his counsel Atty. Rene Sarabia processed the urgent ex-parte petition for bail.

When he returned to Jaro Police Station 3 to get his belongings, he was again arrested and put back in the lock up cell because 14 other unidentified PNP members filed cases of physical injury against him.

Gepaya is temporarily detained at Jaro Police Station 3 detention cell, Jaro Iloilo City while waiting for the fiscal’s resolution of the case filed by the 14 PNP members.

According to Cutanda, the ongoing APEC event is the high level policy dialogue on food security, including biotechnology. The farmers, rural and urban workers, youth and women who are direct stakeholders in food production as well as consumption have the right to be heard on the issue.

Cutanda narrated that the incident happened because the PNP members were protecting the interest of biotech and agribusiness corporation more than the survival and interest of the poor farmers, rural workers and consumers

PLEASE SEND LETTERS TO THE CONCERNED GOVERNMENT AGENCIES TO BRING TO JUSTICE THE PERPETRATORS OF THE VIOLENT DISPERSAL OF PROTEST OF THE BUKLURAN NG PROGRESIBONG MAGBUBUKID NG PILIPINAS. (BPMP) AND THE ARBITRARY ARREST AND DETENTION OF JOEL S. GEPAYA, CHAIRPERSON OF BPMP AND ALAB KATIPUNAN (AK) PANAY COORDINATOR.

This is to express my grave concern regarding the violent dispersal of protest of Bukluran ng Progresibong Magbubukid ng Pilipinas (BPMP) farmer members and the arbitrary arrest and detention of Joel Gepaya, Chairperson of BPMP and AlabKatipunan (AK) Panay Coordinator.

I have learned that on October 4, 2015, at around 2:30 p.m., BPMP members were marching towards the Iloilo Convention Center when they were violently dispersed by the PNP anti-riot team. BPMP Chairperson and AK Panay Coordinator Joel Gepaya was also arbitrarily arrested in from of SM City Jaro, Jaro, Iloilo City.

I have known that there were PNP personnel who were hurt in the commotion, but there were more protesters who sustained injuries including ten (10) members who suffered cuts on their heads.

I have also known that the ongoing APEC event is the high-level policy dialogue on food security, including biotechnology. The farmers, rural and urban workers, youth and women who are direct stakeholders in food production as well as consumption have the right to be heard on the issue.

The incident happened because the PNP members were protecting the interest of biotech and agribusiness corporations more than the survival and interest of the poor farmers, rural workers and consumers.

I am writing to ask for immediate action in favor of the victims: