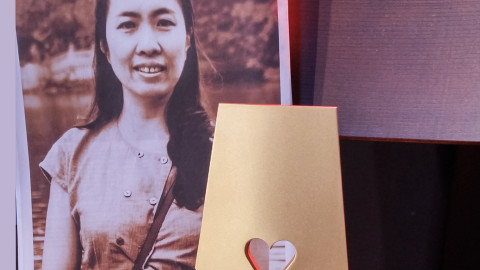 Authorities in Vietnam have blocked at least 33 human rights defenders and activists from freely travelling abroad or internally in the last six months, despite legal protection of the right to freedom of movement. Civil Rights Defenders considers these restrictions arbitrary and in violation of Vietnam’s obligations under its own Constitution and the International Covenant on Civil and Political Rights (ICCPR).

Authorities in Vietnam have blocked at least 33 human rights defenders and activists from freely travelling abroad or internally in the last six months, despite legal protection of the right to freedom of movement. Civil Rights Defenders considers these restrictions arbitrary and in violation of Vietnam’s obligations under its own Constitution and the International Covenant on Civil and Political Rights (ICCPR).

In recent years, scores of human rights defenders and activists have been prevented from, and intimidated over, traveling abroad or moving freely within the country for peaceful human rights activities, such as trainings, peaceful protests and seminars. Many have had their passports confiscated or applications for passports rejected, while others have faced police interrogation at airports. Independent human rights monitors estimate that between 70 and 100 activists currently face government-imposed international travel bans.

“As a member of the UN Human Rights Council, Vietnam is expected to uphold the highest standards in human rights protection and promotion, but it is doing the opposite by denying human rights defenders and activists the opportunity to travel, associate with others, and express themselves freely,” said Brittis Edman, Southeast Asia Programme Director at Civil Rights Defenders. The 30th session of the Human Rights Council begins today in Geneva, Switzerland.

Article 12 of the ICCPR, to which Vietnam is a state party, guarantees that everyone has “the right to liberty of movement,” freedom to leave any country, and the right not to be “arbitrarily deprived” of the right to enter his or her own country. Article 23 of Vietnam’s 2013 Constitution guarantees citizens enjoyment of freedom of movement. However, the Ministry of Public Security issued Decree No. 136  in 2007, granting itself total discretion to prohibit Vietnamese citizens from leaving or entering the country on the grounds of “safeguarding national security and social order and safety.” The Decree provides neither clear nor a precise definition of such grounds or objective criteria for making such determination.

Vietnam is now preparing for its third national report to the UN on the implementation of the ICCPR, overdue since 2004.

“The Vietnamese authorities should immediately lift impermissible restrictions on the right to freedom of movement, and the international community should hold Vietnam accountable to its professed commitment and obligations to align its domestic laws and practices with international human rights law and to foster a safe and enabling environment for civil society.” urges Brittis Edman.

The International Covenant on Civil and Political Rights requires that any restrictions on the right be clearly prescribed by law in compliance with international law, and necessary and proportionate to achieve one of the legitimate objectives listed under Article 12, namely “national security, public order (ordre public), public health or morals or the rights and freedoms of others.” The burden to prove the legality, legitimacy, necessity and proportionality of such restrictions lies with the state. Permissible restrictions must also not impair other human rights and must be non-discriminatory, including on the basis of political or other opinion.

When its record was examined under the Universal Periodic Review (UPR) at the Human Rights Council in 2014, Vietnam accepted to implement recommendations made by other Member States to “strengthen international cooperation in the field of human rights” and participate “actively in international programmes of technical assistance and capacity-building in the field of human rights.” It has also accepted an important recommendation to develop “a safe and enabling environment for all civil society actors to freely associate and express their views by ensuring that national legislative provisions are not invoked to stifle legitimate and peaceful dissent.”

Vietnam currently participates in several bilateral human rights dialogues, including with Australia, the European Union  and the United States. UN and international development agencies based in Vietnam also provide technical assistance to government agencies in the protection and promotion of human rights.

Vietnam’s acceptance of these UPR recommendations and its participation in bilateral and multilateral human rights platforms suggest that it recognises the importance of international cooperation on human rights. A safe and enabling environment for Vietnam’s human rights defenders require that they should be able to travel freely abroad in order to seek and receive information and to cooperate with others at the regional and international levels to further their work. Vietnam’s restrictions of human rights defenders’ freedom of movement appear to be discriminatory and directly undermine the spirit of international cooperation, its implementation of accepted UPR recommendations and compliance with its human rights treaty obligations.

Police intercepted woman human rights defender Tran Thi Nga and her two young children, who were Hanoi-bound for her meeting with visiting foreign lawmakers attending the 132nd Assembly of the Inter-Parliamentary Union (IPU), and drove them back to their home in Ha Nam province.

Human rights blogger Ms Nguyen Ngoc Nhu Quynh (aka Mother Mushroom) could not travel to Stockholm to receive the Civil Rights Defenders 2015 Defender of the Year Award due to an imposed travel ban. The award statue was placed on an empty chair in her absence.

On the 06th of May, public security officers across the country detained, intimidated and/or prevented at least a dozen activists from leaving their home, ahead of the 19th US-Vietnam human rights dialogue which was held on the 07th of May. Activists were invited to attend meetings in Hanoi together with visiting US officials.

Public security authorities at Ho Chi Minh City airport confiscated the passport of prominent intellectual Dr Nguyen Hue Chi who was planning to visit family in the US. Chi is the co-founder of a website that criticises government policies. The authorities later returned his passport and allowed him to travel abroad after more than 100 intellectuals issued a joint petition against Chi’s mistreatment.

In early June, Ho Chi Minh City-based human rights defender Mr Pham Bai Hai was prevented from meeting with Mr. Christophe Strässer, Germany’s Commissioner for Human Rights Policy and Humanitarian Aid, who was on an official visit to Vietnam. Police in the central city of Hue intercepted Mr Le Cong Cau, leader of the Buddhist Youth Movement and Secretary-general of the Unified Buddhist Church of Vietnam (UBCV), as he was travelling to Ho Chi Minh City to meet Strässer and other German diplomats. The Venerable Thich Quang Do, UBCV’s Supreme Patriarch, is under de facto house arrest at the Thanh Minh Monastery in Ho Chi Minh City.

Woman human rights defender Tran Thi Nga went to the Ha Nam provincial immigration office to renew her passport on the 23rd of June. On the 30th of June, a public security officer phoned Nga and informed her that her application was rejected on the grounds that the Ministry of Public Security prohibits her from leaving the country. On the 02nd of July, Nga went to the Ha Nam immigration office to request a written explanation regarding the decision. The office refused to provide this stating that Nga was banned from leaving the country from the 31st of December 2012 and this would be in place up until the 31st of December 2015.

Activist Ms Ta Minh Tu, sister of imprisoned human rights blogger Ms Ta Phong Tan, went to the Bac Lieu provincial immigration office to follow up on her prior application for a passport.  Authorities subsequently advised that her application was rejected because of her affiliation with the independent group Vietnamese Women for Human Rights, which the government deemed an “illegal organisation.”

For the third time this year, police blocked Buddhist youth leader Le Cong Cau from leaving the city of Hue. Cau was invited by the German Consulate in Ho Chi Minh City to meet with Volker Kauder, parliamentary group leader of the ruling Christian Democratic Union and Christian Social Union (CDU/CSU) of the German Parliament.

Police forcibly took Mr Duong Van Tuyen, son of arrested land petitioner Mrs Vu Thi Hai, from Hanoi back to his home in Ninh Binh province ahead of the National Day grand parade on the 1st of September. Tuyen was in the capital city seeking justice for his mother, who was arrested in June on the charge of causing public disorder for her participation in a peaceful protest in Hanoi against violation of land rights.

Police at Hanoi Noi Bai International Airport detained prominent economist and government critic Dr Nguyen Quang A for more than 14 hours before releasing him. Dr A was returning from trips to Europe and the US, where he had attended events relating to human rights and socio-economic issues in Vietnam.

Please click on the following link Q&A Vietnam to download “Q & A on the Right to Freedom of Movement in Vietnam”.