Home Statements The arrest and detention of 14 members of the New Democracy Movement and intimidation against independence of attorney, Thailand 24 – 27 June... 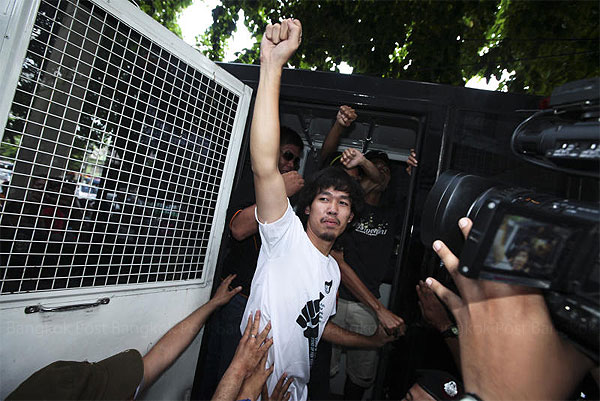 The group is formed by students from the North, Central Plain, Northeast, and South plus more than 20 community-based organizations on 8 June 2015 at the Democracy Monument in Khon Kaen.

The group is formed by students from the North, Central Plain, Northeast, and South plus more than 20 community-based organizations on 8 June 2015 at the Democracy Monument in Khon Kaen. Their fundamental five principles include;

On 24 June 2015, fourteen members of the New Democracy Movement (NDM) have gone to the Pathumwan police station to report a case against officials who have physically assaulted them the night of 22 May 2015. A lot of people were there to give them moral support. After the dispersal of the crowd in front of the Police station, the New Democracy Movement members have gone back to their place, but undercover officials have followed them to their place. Meanwhile, Ms. Nachacha Kongudom, another student activist, was apprehended by police officials who took her to the Military Court and indicted her on charges relating to the violation of the Order of the National Council for Peace and Order (NCPO)’s Head no. 3/2015 banning political gathering. After the remand against her was granted, she was bailed out.

25 June 2015, more than 100 police and military officials laid siege to the place where members of the New Democracy Movement were staying. Yet, they managed to get out and hold a press conference prior to proceeding to the Thammasat University, the May 1992 Monument, the 14 October Monument to commemorate the uprisings on 6 October 1976 and May 1992, and then to the Democracy Monument. They wrapped a large piece of black clothe around the monument and declared their defiance to the power of the military junta after which they dispersed.

26 June 2015, while members of the New Democracy Movement were staying in their place, about 50 police and military officials have charged in with search warrant and arrest warrants to apprehend fourteen members of the New Democracy Movement  including Mr. Rangsiman Rome, Mr. Wasant Sadesit, Mr. Songtham Kaewpanphruek, Mr. Payu Boonsopon, Mr. Apiwat Suntararak, Mr. Rattapol Supasophon, Mr. Supachai Pookhlongploy, Mr. Apisit Sapnapaphan, Mr. Panupong Sritananuwat, Mr. Suvicha Pitungkorn, Mr. Pakorn Areekul, Mr. Chatupat Boonyapatraksa, Mr. Pornchai Yuanyee and Ms. Chonticha Chaengreo. The students were then taken to the Pra Ratchawang Police Station and were pressed with charges relating to the violation of the Order of the National Council for Peace and Order (NCPO)’s Head no. 3/2015 and Article 116 concerning sedition coupled with 83 of the Penal Code. After the pressing of the charges, at 9.30pm, they were taken by the police to the Military Court for indictment and remand custody. All of the alleged offenders pleaded against the remand request. At 0.30am, the Military Court granted the remand in custody of the fourteen members of the New Democracy Movement for twelve days, until 7 July 2015. Thirteen males were taken to the Bangkok Remand Prison, One female to the Woman Correctional Institution.

27 June 2015, at 0.30am, police officials asked to search a vehicle belonging to an attorney representing the members of the New Democracy Movement claiming that some culpable evidence was in the car. As the request was made without a search warrant, the attorney denied the request. Nevertheless, the police officials arbitrarily forfeited and sealed the door handles with pieces of paper preventing it from being removed. The attorney and her colleagues had to sleep by the car that night. At 3.00pm, police officials came with a search warrant and officials from Office of Police Forensic Science to conduct the search. Equipment found in the car included computers and mobile devices such as tablets and mobile phones. Five mobile phones belonging to the students were forfeited. As the search was going on, one police official brought the mobile phones unsealed and unenveloped outside the crime scene. Fifteen minutes later, he returned and put them into an envelope and sealed it before the envelope was taken to the Office of Police Forensic Science. The next day, a high ranking police official told the press that a lot of important evidence was found in the car. In response to that, the team of attorneys held a press conference to decry the practice of the police as being unlawful. They have even pressed charges against the police for malfeasance as well.