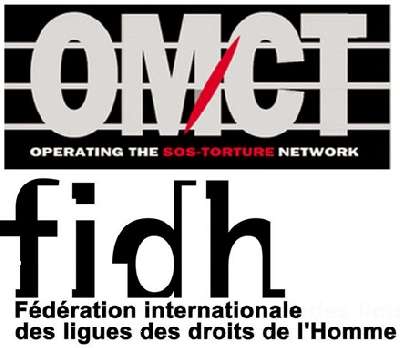 The Observatory for the Protection of Human Rights Defenders, a joint programme of the International Federation for Human Rights (FIDH) and the World Organisation Against Torture (OMCT), requests your urgent intervention in the following situation in The Philippines.

Description of the situation

The Observatory has been informed by reliable sources, including the Task Force Detainees of the Philippines (TFDP), regarding the harassment done by officers of a cooperative/recruitment agency by filing false charges against Mr. Edcil Bacalso, member of NAGKAISA, a coalition of labour groups and Mr. Wilson Fortaleza, member of Partido ng Manggagawa (Workers Party).

According to the information received, on July 14, 2014, the two human rights defenders from the workers sector were both charged with libel, illegal assembly, and alarm and scandal, by officials of the AsiaPro Cooperative [1]. The case was filed against them based on a complaint affidavit by Mr. Edeward C. Milano, Head of the Business Unit for Luzon of AsiaPro Multipurpose Cooperative, at the Office of the Prosecutor, in Pasing City.

The latter accused Mr. Bacalso and Mr. Fortaleza of distributing libelous materials to the public allegedly containing malicious and defamatory statements during a protest held on April 25, 2014. Also, Mr. Milano blamed the group of obstructing the flow of traffic and blocking the pedestrians due to Nagkaisa’s activity. Further, Mr. Milano stated that the public affairs were disturbed due to the loud speaker system used in the protest.

The Observatory strongly condemns the judicial harassment of Mr. Edcil Bacalso, and Mr. Wilson Fortaleza, and calls on the Philippines authorities to immediately and unconditionally close the case and drop the charges brought against them, as their intended goal seems to be the sanctioning of and obstructing to their human rights activities and weaken their campaign against exploitation of workers.

Based on Nagkaisa’s statement, AsiaPro is a supplier of contractual workers of several large corporations [2] that hides under the guise of a cooperative to evade compliance to labor laws and violate labor rights of its members and employees due to their non-payment of wages and other mandatory benefits such as the Social Security System.

In March, 2014, despite the Supreme Court already ruled that AsiaPro must comply with core labor standards and other labor-related laws (G.R. No. 172101), AsiaPro was able to discontinue, through a Temporary Restraining Order (TRO), a labour union certification election in Galeo Equipment and Mining Company [3]. A total of 285 Galeo workers had already voted by the time when the balloting was stopped. Another 275 Galeo workers were unable to cast ballots and were disenfranchised due to the TRO.

The election standoff arose from an attempt by the AsiaPro manpower cooperative to prevent the unionization efforts at Galeo. Asiapro is claiming that the Galeo workers are their members and thus exempt from unionization. Galeo workers did not even know that they were members of Asiapro.

On April 25, 2014, at 9:30am in San Rafael Street, Barangay Kapitolyo, Pasig City, Nagkaisa led a peaceful rally outside the building, where the AsiaPro central office is located, to protest against AsiaPro anti-human rights practices.

Please also write to the diplomatic representations of the Philippines in your respective countries.

The Observatory, a FIDH and OMCT venture, is dedicated to the protection of Human Rights Defenders and aims to offer them concrete support in their time of need.

Please write to the Philippines authorities urging them to:

4. Guarantee the respect of human rights and fundamental freedoms in accordance with the Universal Declaration on Human Rights and other international human rights instruments ratified  by the Philippines.