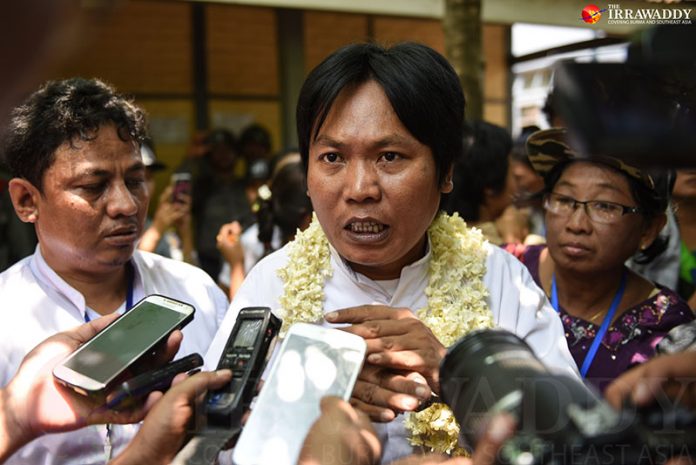 Prominent student unionist Nandar Sitt Aung is being detained for his role helping organize student protests in Myanmar. He faces up to fifteen years and six months’ imprisonment. He is a prisoner of conscience.

Nandar Sitt Aung is a senior member of the All Burma Federation of Student Unions (ABFSU), one of Myanmar’s most well-known student unions. He was arrested on 27 March during a peaceful demonstration calling for the release of student protesters arrested during a police crackdown on 10 March. He is currently on trial facing two different criminal cases for his role in student protests in February and March 2015.

The first case against Nandar Sitt Aung is currently being heard before the Tharawaddy Township Court in Bago Region, central Myanmar. Nandar Sitt Aung has been charged – along with scores of other student protesters – for his part in demonstrations against a National Education Law that students say curtails academic freedom. The demonstrations began in February in different parts of the country and ended in the town of Letpadan on 10 March, after police violently dispersed the protesters. Although Nandar Sitt Aung was not in Letpadan that day, he had led the protests in the weeks before and has been charged with taking part in an unlawful assembly (Article 143 of the Penal Code), joining or continuing an unlawful assembly knowing it has been dispersed (Article 145), “rioting” (Article 147), voluntarily causing hurt to deter a public servant from his duty (Article 332) and inciting the public to commit offences against the State or the public tranquillity (Article 505(b)).

He faces almost identical charges before the Kamayut Township Court in Yangon for a protest he organized on 10 March against the violent dispersal of the student march earlier that day in Letpadan. After the protest on 10 March he went into hiding. On 27 March he participated in another peaceful demonstration and was arrested. He is currently detained in Tharawaddy prison, Bago Region.

On 8 November Myanmar will hold general elections and Amnesty International believe that the President of Myanmar can be influenced to declare a prisoners amnesty and release prisoners of conscience ahead of the elections.

ADDITIONAL INFORMATION
Nandar Sitt Aung and other members of student unions have been leading student protests since the end of 2014, after the National Education Law was adopted on 30 September 2014. They claim the law curtails academic freedom and are calling for it to be amended.

In February, student groups organized marches in four groups of protesters throughout the country which were to meet in Yangon, the country’s main city. Government authorities ordered the students to stop protesting and warned them that they would not be allowed to enter Yangon. In the meantime, student leaders and representatives from the government and Parliament held discussions on amendments to the National Education Law, leading the students to suspend the marches while negotiations continued. However talks broke down. In early March student protesters in Letpadan, Bago Region, announced that they would resume marching towards Yangon, however police prevented them. This lead to an eight-day standoff between the students and the police.

The stand-off ended on 10 March when police forcibly dispersed the student protesters. Eyewitnesses told Amnesty International that when protesters tried to dismantle a police blockade the police began beating protesters with batons, including some who had fallen to the ground. More than 100 students were arrested that day, some have since been released on bail but more than fifty remain in detention in Tharawaddy prison, Bago region.

Nandar Sitt Aung was previously arrested in 2003 while he was General Secretary of the ABFSU. He was sentenced to 20 years in prison for distributing statements criticizing the former military regime. He was released in 2012 as part of a presidential prisoner’s amnesty.

Human rights defenders and activists in Myanmar are being arrested and detained solely for the peaceful exercise of their rights to freedom of expression and peaceful assembly, rights enshrined in Articles 19 and 20 of the Universal Declaration of Human Rights (UDHR). A range of laws in Myanmar are used to criminalize freedoms of expression and peaceful assembly, including Section 505(b) of the country’s Penal Code. The restrictions on the right to freedom of expression imposed by these laws are phrased in an excessively broad and vague manner, potentially resulting in both an overreach, and a discriminatory application of the law.

Amnesty International continues to receive reports about poor prison conditions in Myanmar, which do not comply with those set out in the UN Standard Minimum Rules for the Treatment of Prisoners. These concerns include a lack of access to adequate medical treatment, clean drinking water, nutritious food and water for bathing.

Please write immediately in English, Burmese or your own language:

Please check with your section office if sending appeals after the above date.