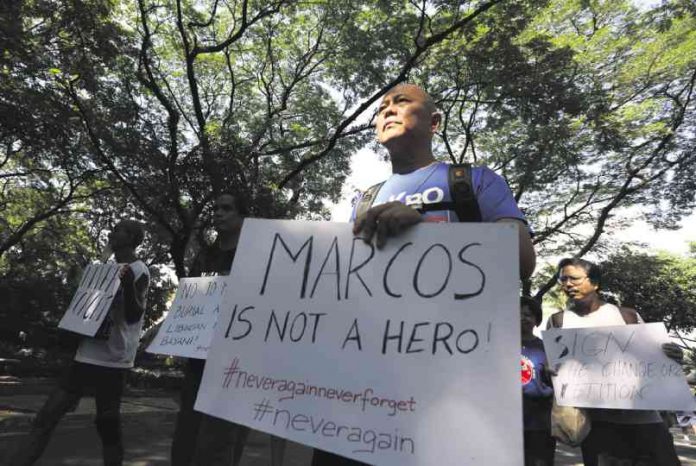 FORUM-ASIA strongly condemns the burial of Ferdinand Marcos at the Libingan ng mga Bayani, the cemetery of national heroes, in the Philippines. The burial of Marcos conveys a distressing message, not only to Filipinos but also to people’s movements all over the region that massive state-perpetrated human rights violations are being honoured.

(Bangkok, 19 November 2016) – The Asian Forum for Human Rights and Development (FORUM-ASIA) strongly condemns the burial of Ferdinand Marcos at the Libingan ng mga Bayani, the cemetery of national heroes, in the Philippines. The burial of Marcos conveys a distressing message, not only to Filipinos but also to people’s movements all over the region that massive state-perpetrated human rights violations are being honoured. FORUM-ASIA extends its solidarity to all Filipinos who refuse to forget the past human rights violations, the plunder of the nation’s coffers, and the destruction of democratic institutions under the dictatorship of Ferdinand Marcos.

Ferdinand Marcos was the President of the Philippines from 1965 to 1986. He declared Martial Law and ruled the country with an iron fist from 1972 to 1981. Upon the declaration of Martial Law, all fundamental freedoms were curtailed, the Congress was suspended, and media was completely shut down. The opposition leaders and activists were arrested, detained, tortured, and killed. The grave corruption and neoliberalism economic policy under his rule triggered widespread resistance in urban and rural areas.

In 1986, after the snap election, more than two million Filipinos occupied the street of EDSA for three days from 22-25 February. The People Power Revolution was successful in forcing Marcos to step down and restoring democracy in the Philippines.

The Task Force Detainee of the Philippines (TFDP), one of FORUM-ASIA members in the Philippines, documented 101,538 human rights violation cases perpetrated by Ferdinand Marcos under his dictatorship regime.

“The Philippines was considered as one of the most democratic countries in the region since Filipino people ousted Ferdinand Marcos by non-violent resistance in 1986. We are deeply disappointed by the Supreme Court’s decision and Rodrigo Duterte’s administration to honour the late dictator Ferdinand Marcos,” says John Samuel, Executive Director of FORUM-ASIA.

The Human Rights Victims Reparation and Recognition Act of 2013 recognises “the heroism and sacrifices of all Filipinos who were victims of summary execution, torture, enforced or involuntary disappearance and other gross human rights violations committed during the regime of former President Ferdinand E. Marcos covering the period from September 21, 1972 to February 25, 1986 and restore the victims’ honor and dignity.” The Act further states that “The State hereby acknowledges its moral and legal obligation to recognise and/or provide reparation to said victims and/or their families for the deaths, injuries, sufferings, deprivations and damages they suffered under the Marcos regime.” The burial of Ferdinand Marcos today, thus, explicitly undermines the recognition of those who had lost their lives and freedoms fighting for human rights and democracy.

“The burial of Marcos today also reminds us all that the struggles for human rights and democracy is a never-ending battle. We, FORUM-ASIA, stand in solidarity with our Filipino friends in the fight for freedom and justice in the Philippines and in the region,” concludes John Samuel.