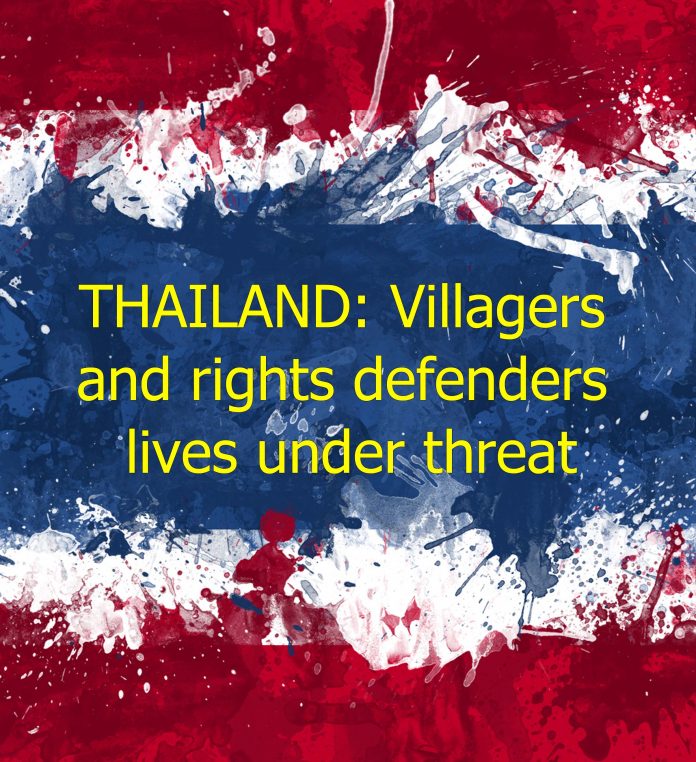 The Government of Thailand

SUGGESTED ACTION:
Please write letters to the authorities below, asking them to take action to protect the rights of the human rights defenders and other villagers in Loei.
Please note that the Asian Human Rights Commission has written letters to the UN Special Rapporteurs on Situation of Human Rights Defenders and the Independent Expert on the issue of human rights obligations relating to the enjoyment of a safe, clean, healthy and sustainable environment seeking their urgent intervention in this case.
To support this appeal, please click here:

SAMPLE LETTER:
Dear ___________,
THAILAND: Human rights defenders fighting corporate mining in Loei province at risk of violence
Victims: Villagers from six villages including Nanongbong, who have protested against the mining industry and the expansion of the Phuthapfa gold mine in the Loei province in North Eastern Thailand
Alleged perpetrators:
1. Tungkam Limited's (TKL)
2. Military and ex-military personnel
Date of incident: Since February 2009 to 16 May 2014; Risk of violence on 29 May 2014
Place of incident: Loei province in North Eastern Thailand
I am deeply disturbed to have learned that threats against human rights defenders working to protect their communities from the negative effects of mining in Loei province have now become threats against their lives. Tungkum Limited (TKL), a subsidiary gold exploration and mining company of Tongkah Harbour Public Company Limited, has taken legal action against the Khon Rak Ban Koed Group, a group of villagers from six villages including Nanhongbong, who have protested against the mining industry and the expansion of the Phuthapfa gold mine in the Loei province in North eastern Thailand. The members of the Khon Rak Ban Koed Group have battled to protect the environment and natural resources of their village and to uphold their community's agricultural practices.
The community was attacked on the evening of 15 May 2014 and villagers and human rights defenders were detained and bound by marked, armed men while copper ore was transported out of the mine. I have learned from a reliable source that gunmen have been hired to assassinate the leaders of the movement. I am further concerned that the broad-based repression and criminalization of protest caused by the declaration of martial law on 20 May 2014, and the coup by the National Council for Peace and Order (NCPO) increases the likelihood of violence, and makes the possibility of redress more difficult.
The AHRC calls on all those concerned with human rights in Thailand to call for assurances from the NCPO and other relevant authorities to ensure that the villagers' safety and right to life and livelihood are protected.
I would like to urge:
1. The Head of the National Council for Peace and Order to ensure that the declaration of martial law and the coup do not create conditions in which human rights defenders and villagers are placed at greater risk.
2. The Commissioner General of the Royal Thai Police to investigate the performance of local authorities for failing to address bomb threats against the villagers and to protect the community on the evening of 15 May 2014, and to protect the leaders and all members of the community from threats on their persons and lives. It is paramount that the police actively protect the villagers and HRDs involved in the case.
3. The Department of Special Investigation, Ministry of Justice to investigate the purchase and sale of minerals by TKL. The Department is further urged to implement immediate security and protective measures to ensure the safety of members and leaders of groups who protest against mining companies as well as those who have been witnesses to violence in the village.
4. The Subcommittee on Civil and Political Rights at the National Human Rights Commission to join with the Subcommittee on Community Rights and continue investigating violations of the rights, including the human rights, of the community and the threats, intimidation and harassment that have been made on the villagers and their leaders. The NHRC should also coordinate with relevant local authorities, including the governor of Loei, to ensure the safety of all HRDs involved in this case.
Yours sincerely,
—————-
PLEASE SEND YOUR LETTERS TO:
1. General Prayuth Chan-ocha
Head of the National Council for Peace and Order
Royal Thai Army Commander-in-Chief
Rachadamnoen Nok Road
Bang Khun Phrom
Bangkok 10200
THAILAND
E-mail: prforeign@gmail.com
2. Dr. Niran Pitakwatchara
Chairperson, Subcommittee on Civil and Political Rights
Commissioner, National Human Rights Commission
The Government Complex Commemorating His Majesty the King's 80th Birthday Anniversary 5th December, B.E.2550 (2007), Building B 120 Moo 3
Chaengwattana Road
Thoongsonghong, Laksi Bangkok 10210
THAILAND
E-mail: niran@nhrc.or.th
3. Attorney General
Office of the Attorney General
Lukmuang Building,
Nahuppei Road
Prabraromrachawang,
Bangkok 10200
THAILAND, Fax:
Email: oag@ago.go.th
4. Commissioner General
Royal Thai Police
Building 1, 7th Floor
Rama I
Pathumwan
Bangkok 10330
THAILAND
Email: feedback@police.go.th
5. Mr. Jesús Miguel Sanz
Ambassador
Delegation of the European Union to Thailand
Kian Gwan House II
19th Floor
140/1 Wireless Road
Bangkok 10330
THAILAND
Email: delegation-thailand@eeas.europa.eu
6. Office of the United Nations High Commissioner for Human Rights
Regional Office for South East Asia
6th Floor, United Nations Buidling
Rachadamnern Nok Avenue
Bangkok 10200
THAILAND
Fax: +66 2 288 1039
Email: ohchr.bangkok@un.org