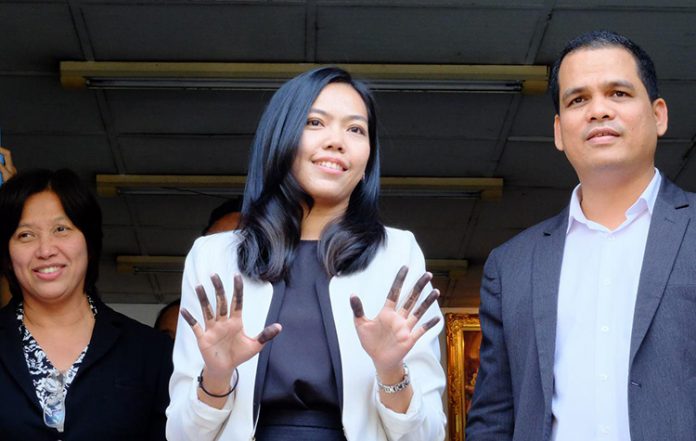 The Thai Government should immediately drop all proceedings against human rights lawyer, Sirikan Charoensiri, including the specious accusation of sedition, which apparently relate to her organization’s representation of 14 student activists peacefully protesting in June 2015

On 27 September 2016, Sirikan Charoensiri, a lawyer and documentation specialist at Thai Lawyers for Human Rights (TLHR), received a summons from the Thai Police following accusations that she violated Article 12 of the Head of National Council for Peace and Order (NCPO) Order 3/2015, prohibiting the gathering of five or more people for political purposes, and Article 116 of the Thai Criminal Code, a ‘sedition’-type offence. According to the summons, the accusations are made by an army officer, Lieutenant Colonel Pongsarit Pawangkanan.

Sirikan Charoensiri received the summons, dated 20 September 2016, when she returned to Thailand after attending the 33rd Session of the Human Rights Council in Geneva where she conducted advocacy on the human rights situation in Thailand on behalf of FORUM-ASIA and the ICJ. Sirikan Charoensiri did not receive an earlier summons, dated 14 September 2016, the police claimed had been sent to her apartment, as she was not home at the time.

Sirikan Charoensiri has already been charged with two offences under the Criminal Code of Thailand: “giving false information regarding a criminal offence” and “refusing to comply with the order of an official” in relation to TLHR’s provision of legal aid to 14 student activists – the new summons appears to relate to the same case.

“The army’s accusation that Sirikan Charoensiri has violated the frequently abused sedition law with its extremely serious penalties and risk of a military trial is indefensible and must be withdrawn immediately,” said Wilder Tayler, Secretary General of the ICJ. “The fact that the authorities have made these accusations more than one year after TLHR’s clients were charged with sedition in the same case suggest the accusations have been made in retaliation for her high-profile national and international human rights advocacy since the military coup.”

“It’s outrageous that Thai authorities are even considering charging lawyer Sirikan Charoensiri for defending her clients, and it will be doubly so if they haul her before a fundamentally unfair military court,” said Brad Adams, Asia director at Human Rights Watch. “By seeking to intimidate lawyers who represent government opponents, the Thai junta is showing its deep-seated fear of the rule of law.”

“The new accusations against Sirikan Charoensiri once again demonstrate the willingness of Thai authorities to retaliate against lawyers and activists engaging in the important work of defending human rights and the rule of law,” said Rafendi Djamin, Amnesty International’s Director for South East Asia and the Pacific. “The Thai government should reverse course and take seriously its obligation to protect the independence of lawyers and their freedom to defend their clients without fear of retaliation, and to create an environment where all are able to freely and safely speak out about human rights violations.”

“Summoning human rights lawyer Sirikan Charoensiri for a sedition-type charge under Article 116 of the Thai Criminal Code is a clear case of retaliation against human rights defenders who advocate for the human rights situation in Thailand after the coup in May 2014,” said Betty Yolanda, the Director of FORUM-ASIA. “If indicted, Sirikan Charoensiri’s legitimate human rights work might be hindered by possible travel restrictions to take part in international human rights advocacy work given that prior permission to travel abroad has to be obtained from the National Council for Peace and Order (NCPO).”

“The accusations against Sirikan Charoensiri are a blatant and calculated attempt to thwart her legitimate work as a human rights lawyer,” said Gerald Staberock, OMCT Secretary-General. “The crackdown against human rights defenders, including pro-democracy activists, has to stop and all accusations and charges against Sirikan Charoensiri must be immediately dropped.”

“The addition of new accusations against Sirikan Charoensiri is alarming, as they appear to be a reprisal for her work as a lawyer and a human rights defender,” said Gail Davidson, Executive Director of LRWC. “Thailand approved the General Assembly resolution calling on all nations to protect human rights defenders and must now meets its international human rights obligations by ensuring the immediate withdrawal of all accusations against Sirikan Charoensiri.”

“Targeting Sirikan Charoensiri for her legitimate work as a human rights lawyer is yet another attempt by the authorities to foment a climate of fear,” said Amy Smith, Executive Director at Fortify Rights. “Thai authorities should treat human rights defenders as valuable members of society rather than enemies of the state.”

“The spurious accusations against human rights lawyer Sirikan Charoensiri should be withdrawn immediately and unconditionally,” said Phil Lynch, Director, International Service for Human Rights. “Thailand has a clear duty to protect human rights defenders under international law and standards and so it is particularly concerning that these accusations may be in retaliation for her human rights advocacy since the military coup.”

The 20 September 2016 summons did not set out any precise grounds for the accusations, but they appear to relate to TLHR’s provision of legal aid to 14 student activists who were arrested on 26 June 2015 after carrying out peaceful protests calling for democracy and an end to military rule.

If ultimately indicted for these alleged offences, Sirikan Charoensiri is likely to face trial in a military court as they appear to pre-date the Head of NCPO’s 12 September 2016 Order 55/2016 phasing out the prosecution of civilians in military courts.

Article 12 of Head of NCPO Order 3/2015 (which prohibits the public assembly of five or more people for political purposes) carries a maximum penalty of six months’ imprisonment or a fine not exceeding 10,000 Thai Baht or both. The ‘sedition’-type offence under Article 116 of the Thai Criminal Code carries a maximum sentence of seven years’ imprisonment.

Head of NCPO Order 3/2015 and Article 116, which impose broadly worded and ambiguous restrictions on the exercise of freedom of expression, freedom of association, and freedom of peaceful assembly violate Thailand’s legal obligations under international human rights law and are inconsistent with basic rule of law and human rights principles. For example, Article 116 criminalises any act carried out “in order to… raise unrest and disaffection amongst the people in a manner likely to cause disturbance in the country.”

The International Covenant on Civil and Political Rights (ICCPR), to which Thailand is a Party, guarantees the right to peaceful assembly, freedom of expression, freedom of association, and the prohibition of arbitrary arrest or detention.

The UN Declaration on Human Rights Defenders affirms the right of everyone to peacefully oppose human rights violations. It prohibits retaliation, threats and other harassment against anyone who takes peaceful action against human rights violations, both within and beyond the exercise of their professional duties.

The UN Basic Principles on the Role of Lawyers provide that governments are to ensure that lawyers are able to perform their professional functions without intimidation, hindrance, harassment or improper interference.