Home Statements - Deplorable Harassment Against Zunar and His Team 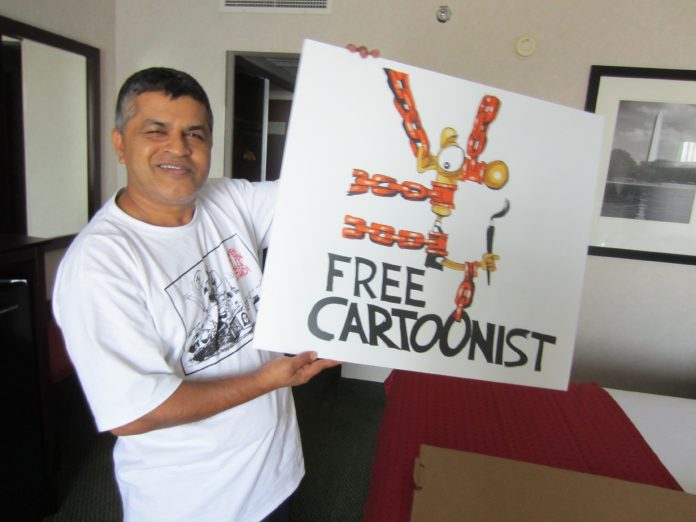 DEPLORABLE HARASSMENT AGAINST ZUNAR AND HIS TEAM

Suara Rakyat Malaysia (SUARAM) decries the unrelenting harassment and persecution by government against political cartoonist Zulkifli Anwar Ulhaque, or better known by his pen name Zunar. We demand the police and Home Minister to uphold Zunar’s constitutional right to express his ideas and cease all harassment against Zunar, three of his assistants, webmaster, printers and bookstore vendors.

For the longest time, Zunar has been attacked by the police and the Home Ministry for producing cartoons that were purported to be detrimental to public order. More than 400 copies of his books were confiscated and five of his books titled “Perak Darul Kartun”, “1 Funny Malaysia”, “Isu Dalam Kartun” Vol. 1, 2 and 3 were banned by the Home Minister from 2009 to 2010. Government’s determination to persecute Zunar was extended to printers, vendors and bookstores around the country – their places were raided and they were warned to not print and carry any of Zunar’s book in future.

And of late, on 6 November 2014, Zunar’s assistants – Rizaldy Rafie, Raja Norita and Norliza Kassim were arrested and taken to Putrajaya police station for selling two purported controversial cartoon books by Zunar titled ” Konspirasi Memenjarakan Anwar” and “Pirate of the Carry-BN”.  44 copies of Zunar’s cartoons book were again confiscated by the police and Zunar’s assistant were all probed under Section 8(2) of the Printing Presses and Publications Act 1984, Section 4(1)(c) of the Sedition Act 1948, and Section 500 of the Penal Code.

The police’s action went against the recent stand took by Court of Appeals. A month earlier, the Court of Appeal took an unanimous stand and lifted a ban imposed by Home Minister on two of Zunar’s cartoon books “Perak Darul Kartun” and “1 Funny Malaysia” on grounds that they were not a threat to national security or prejudicial to public order. In delivering his judgement, Justice Mohamad Ariff stated that the law should not be abused by executive and that public odium cannot be so conveniently equated with public order.

Nevertheless, the Home Ministry, on a letter dated 10 November 2014, informed Zunar and his lawyer that they are appealing at Federal Court to have the Court of Appeal’s decision struck out, insisting that Zunar’s cartoon satire is prejudicial to public order.

Under Article 10 of the Federal Constitution, our forefather has provided that every citizen has the right to freedom of speech and restriction is deemed necessary only if the act threatens the interest of national security, public order or morality that should be narrowly defined in line with international human rights law. For this, it goes against logic and common sense to hold that Zunar’s cartoons political satire can be purported as detrimental to public order, morality and certainly not national security.

No one should be subjected to intimidation, criminalisation and imprisonment for producing satirist cartoons which is a legitimate expression of political opinions through the form of art. Any reasonable reader would be mature and open-minded enough to draw a line between facts and jokes. The government is projecting itself as a repressive, tyrannical and narrow-minded leader by putting forward these unrelenting attacks on Zunar and his teams.

While the government refused to recognise and appreciate Zunar’s work, in 2011, Zunar was conferred “Courage in Editorial Cartooning Award” by the Cartoonist Rights Network International, a cartoonists’ rights NGO based in Washington, USA. And again in October 2014, one of Zunar’s book, “Pirate of the Carry-BN” has been accepted into the Library of Congress in Washington.

Freedom of expression is a defining attribute of democratic states and political satire is a bellwether of the extend of openness of a country. As firm believer in rights to freedom of expression, Suara Rakyat Malaysia (SUARAM) is hereby calling the government to: