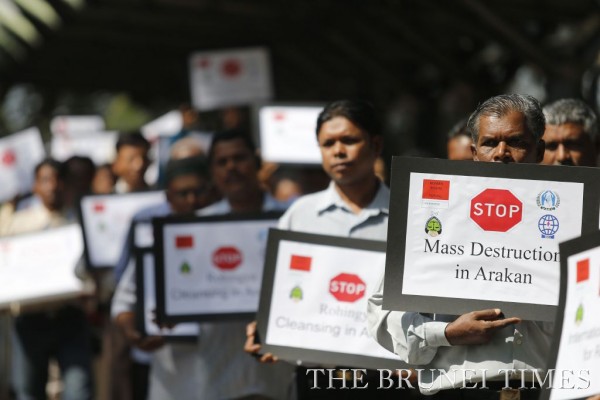 HUMANiTi Malaysia, in partnership with the OIC, KAICIID and ALTSEAN-Burma, convened a roundtable ‘Tolerance in a People-Centred ASEAN’ on 6-7 April 2015 in Kuala Lumpur, Malaysia. The event brought together diverse stakeholders from the ASEAN region, including representatives of more than 20 national, regional and international nongovernmental organisations, to discuss key trends, issues of concern and share approaches to promote tolerance in ASEAN.

HUMANiTi Malaysia, in partnership with the OIC, KAICIID and ALTSEAN-Burma, convened a roundtable ‘Tolerance in a People-Centred ASEAN’ on 6-7 April 2015 in Kuala Lumpur, Malaysia. The event brought together diverse stakeholders from the ASEAN region, including representatives of more than 20 national, regional and international nongovernmental organisations, to discuss key trends, issues of concern and share approaches to promote tolerance in ASEAN.

Roundtable participants voiced overwhelming concern about the trend of rising intolerance in Myanmar, including proposed legislation related to the ‘protection’ of race and religion that is inconsistent with international human rights standards including United Nations conventions to which Myanmar is party, as well as continued trends of violence and discrimination against ethnic and religious minorities, including Rohingya, in many parts of the country. These trends have caused and contributed to human rights crises with severe humanitarian consequences, gender-based discrimination, statelessness, segregation, refugee flows and other threats to human security, posing challenges to Myanmar’s transition to democracy and upcoming elections. Moreover, these trends threaten regional stability and could exacerbate violence and polarisation along religious and ethnic fault-lines. Such trends could seriously undermine the establishment, sustainability and credibility of the ASEAN Community, including economic integration and regional economic development.

Identifying ways forward, participants discussed a range of strategies at local, national, regional and international levels. The strong responsibility of regional actors was emphasised, particularly ASEAN and other intergovernmental organisations, regional humanitarian and human rights organisations, the regional business community, and regional faith leaders. Mindful that the ASEAN Human Rights Declaration includes the protection of the right to freedom of religion, there is a continued need to facilitate interfaith engagement and dialogue within Myanmar and the wider region.

In addition, participants called on ASEAN to step up engagement on protecting ethnic and religious minorities in the process of Myanmar’s transition to democracy. At this pivotal moment in ASEAN’s history, when ASEAN’s Charter and processes are being reviewed, participants called on ASEAN to re-examine the principle of non-interference in the context of human rights crises that have implications on regional peace and stability. Participants noted and strongly supported the United Nations General Assembly Resolution 69/248, United Nations Human Rights Council Resolution A/HRC/28/L.21, and the recent report and recommendations of the United Nations Special Rapporteur on the human rights situation in Myanmar.

HUMANiTi Malaysia is an NGO, being very recently registered under the Leadership of Tan Sri Dr.Syed Hamid Albar. The fundamental purpose for which the organization is established is to help the victims of conflicts in the war zones as well as the victims of religious and ethnic conflicts taking place in region and beyond. HUMANiTi Malaysia intends to lessen the suffering of the Humanity by providing assistance to the victims in whatever way possible. To spread the message of, Tolerance, Love, Brotherhood and Inclusiveness, across National, Regional, Racial, Ethnic and Religious boundaries.