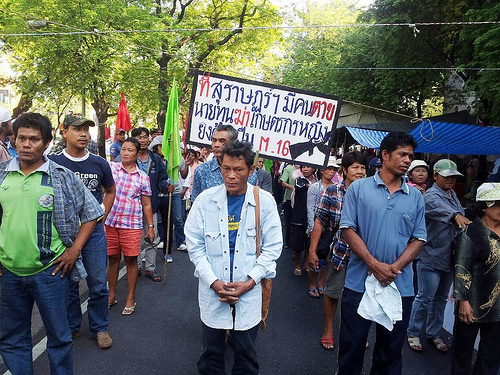 On 25 March 2015, two members of the Southern Peasants’ Federation of Thailand – SPFT (Southern Peasant Cooperatives) were stopped by unknown persons as they were leaving the Chaiburi District, Surat Thani Province, Thailand

On 25 March 2015, two members of the Southern Peasants’ Federation of Thailand – SPFT (Southern Peasant Cooperatives) were stopped by unknown persons as they were leaving the Chaiburi District, Surat Thani Province, Thailand, where they had met with the Khlong Sai Pattana community. It is believed that the SPFT members were stopped because their vehicle was mistaken for that of human rights defender and SPFT member Mr Pratheep Rakhanthong, who has been the victim of multiple death threats.

In it’s 2015 Annual Report, Front Line Defenders reported that human rights defenders in Thailand are subjected to arrest, detention, and interrogations as a result of their legitimate human rights activities.

On 22 May 2014 the National Council for Peace and Order (NCPO), led by General Prayuth Chan-ocha, seized power and abrogated the 2007 Constitution. The NCPO instituted an indefinite period of martial law which saw several HRDs and activists summoned for questioning. Many were made to sign a pledge not to participate in any activity of a ‘political nature’.

Martial law allowed the army to detain and interrogate anyone for up to seven days without providing evidence of wrongdoing or bringing formal charges. Scores of protesters and HRDs were arrested and held at irregular places of detention, including permanent or temporary military bases.

NCPO orders No. 97 and 103 restricted press freedom and banned interviews with former government officials, judges or academics whose statements might cause ‘public confusion’. Restrictions on freedom of expression through the use of the Computer Crime Act and the Lèse Majesté law – which have been repeatedly used to target political activists, HRDs and other independent voices – intensified after the coup.

In the most recent persecution of human rights defenders in Thailand on 25 March 2015, two cars – one in front and one behind – forced the car of SPFT members to stop at approximately 4:00pm. An unidentified man looked inside the SPFT members’ car and then told his colleagues that the person that they were looking for was not in the vehicle. The SPFT members were then allowed to continue their journey.

Members of SPFT have been targeted on numerous occasions in the past. On 16 March 2015, members of SPFT were intimidated, and six days before, information was received that SPFT member Mr Pianrat Boonrit had been placed on a surveillance list as an “influential person of interest” on the basis of alleged links to organised crime. In February 2015, SPFT member Mr Chai Bunthonglek was shot and killed at his home in Chaiburi District, Surat Thani Province, by an unknown man.

Front Line Defenders expresses its concern at the threats and acts of surveillance against members of SPFT, including Pratheep Rakhanthong, which it believes to be directly linked to their peaceful and legitimate human rights activities. Front Line Defenders is gravely concerned for the physical and psychological integrity of SPFT members