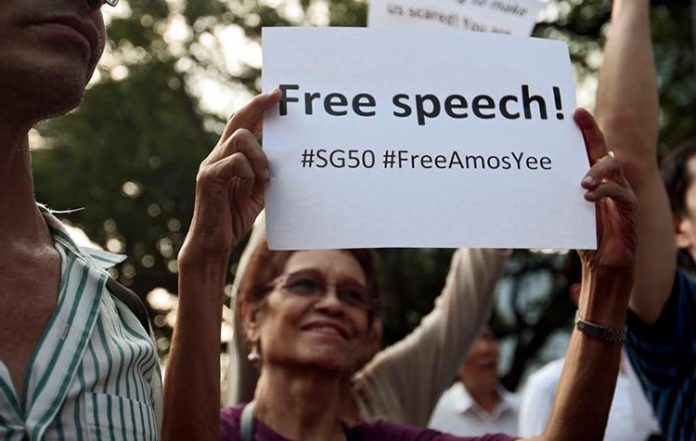 FORUM-ASIA and its Singaporean member, Think Centre, condemn the passage of the Administration of Justice (Protection) Bill by the Singaporean Parliament on Monday 15 August. It further restricts the limited right to freedom of expression and press freedom in the country.

(Bangkok, 20 August 2016) – The Asian Forum for Human Rights and Development (FORUM-ASIA) and its Singaporean member, Think Centre, condemn the passage of the Administration of Justice (Protection) Bill by the Singaporean Parliament on Monday 15 August. It further restricts the limited right to freedom of expression and press freedom in the country.

The new Law deems contempt of court a criminal offence punishable by disproportionate penalties and provides a vague and broad definition of contempt including prejudicing court matters, disobeying court orders, and scandalising the courts. In recent years, the Attorney-General’s Chambers (AGC) has issued warnings in relation to sub judice, among others in relation to the case of Benjamin Lim and Amos Yee.[1] These instances appear to have been specifically related to comments on court cases and proceedings on social media.

The Law, which is broadly and vaguely formulated, also introduces harsh penalties, including up to three years imprisonment and fines of US$100,000. The combination of these two punishments turns the Law into a potential tool to severely restrict the right to freedom of expression in an environment that is already worryingly oppressive. It essentially criminalises people who criticise the courts or the administration of justice. This is an extension of existing laws that encroached into cyberspace where it is usually considered a less restrictive space for opinions and expressions. The Law will exacerbate the chilling effect and self-censorship already prevalent in society.

“The Law can be used to silence citizens, civil society, and human rights organisations from voicing their opinions over any judicial process. Speaking out on judicial errors as part of exercising the right to freedom of expression is essential to exposing injustice,” says Mukunda Kattel, Director of FORUM-ASIA.

It is even more worrisome that the already restricted space for civil society and human rights defenders, who fight for the protection of fundamental human rights, will be further curtailed under this Law. Restrictions on their ability to criticise or even comment on judicial proceedings will severely limit the scope and extent of their work.

“Given the tremendously difficult situation in Singapore regarding freedom of expression, the new Law can only be seen as another attempt by the Government to restrict the work of civil society,” adds Samydorai Sinapan, Director of ASEAN Affairs, Think Centre.

The Law also includes a provision that exempts statements made by the Government if it ‘believes such statement is necessary in the public interest’. This caveat effectively puts the Government above the law, and undermines public debate on issues that affect residents intimately. On several occasions in recent months, the Government has done just that, in their comments on ongoing court cases of Roy Ngerng and Teo Soh Lung,[2] while at the same time criticising human rights activists for doing the same.

The Law, and the consequences it engenders, is part of a broader pattern discernible in Singapore when it comes to basic human rights. During the Second Cycle of the Universal Periodic Review (UPR) of Singapore in January 2016, some 15 countries raised their concerns over restrictions on the right to freedom of expression in Singapore, while 46 countries recommended Singapore to ratify core international human rights treaties, including the International Covenant on Civil and Political Rights (ICCPR). It is disappointing to note that Singapore appears to ignore the concerns and recommendations of the global community.

FORUM-ASIA is a regional human rights group with 58 member organisations in 19 countries across Asia. FORUM-ASIA has offices in Bangkok, Jakarta, Geneva and Kathmandu. FORUM-ASIA addresses key areas of human rights violations in the region, including freedoms of expression, assembly and association, human rights defenders, and democratization.